What if someone living in Germany, France, or England in the mid 1600’s roughly 400 years ago, at the height of the witch trials, the plague, and the great fire of London (both assumed to be due to god’s wrath due to individual’s witchcraft, heresy, blasphemy, or a general lack of piety among the populace), following 100 years of religious wars raging across Europe, and the equally religiously infused English Civil War, prophesized that by the 2000’s Northern Europe would be 80% godless with England pushing 30% atheist/agnostic and even the pervasively Xian US following not far behind with 20% identifying as non-religious.
It would be nearly certain you would be the guy in the image above routinely tortured unmercifully until you recanted your heresy and then beheaded (if you were lucky) or burned at the stake.

Yet despite the smothering and crude and cruel religiosity of the post-Medieval times, here we are a few centuries later with religion in a continued steep decline. Even in highly religious countries life proceeds daily in a predominantly secular fashion with religion relegated to one or two days per week observance and only in Saudi Arabia and a few other countries does beheading for religious reason still occur.

Read Michael Shermer’s answer to the annual Edge.org question “What Scientific Idea is Ready for Retirement.”
He suggests religion and belief in god is NOT innate. Poll after poll in country after country shows the young to be the least religious. The dialogue is everywhere; the questioning of religious beliefs and practices:

“It is time for scientists to retire the theory that God and religion are hardwired in our brains. Like everyone else, scientists are subject to cognitive biases that tilt their thinking toward trying to explain common beliefs, so it is good for us to take the long-view perspective and compare today to, say, half a millennia ago when God beliefs were virtually 100%, or to the hunter-gatherer tribes of our Paleolithic ancestors who, while employing any number of superstitious rituals, did not believe in a God or practice a religion that even remotely resembles the deities or religions of modern peoples.”

When you don’t raise kids in a belief in god, most don’t flock to find one. Many grow up utterly without the need for it: a benign indifference. Some may seek spiritual understanding of some kind, but it’s often a mild form like the pacifism and mindfulness of Buddhism minus the reincarnation part. I raised four children and didn’t tell them about religion and didn’t wail against it in front of them either, in fact I encouraged them to check out different religions once they were older. I even admonished one at age 13 or so for claiming with a buddy from school they were atheists like many kids in his class who thought religion stupid. I told him he was too young to know and to check it all out when he got older and then decide. He might like one of the religions one day for all he knew and he might not.

How’s that for an Unbelieving Scum™ parent, huh? I respect my kid so much to make up his own mind, I refused to push my disbelief upon him, upon any of them, the exact opposite of what the Xians and Muslims and Buddhists and many others feel is proper. Brainwashing your kid under threat of disobedience and ostracization is the norm, especially in the “Big Two” Xianity and Islam. Child indoctrination is one of the most accepted yet sleazy practices of religions. Youth ministry praying (preying) on the cognitively immature and emotionally vulnerable adolescent is the worst. Conning some defenseless 13 year-old into the monastery, the madrassa, the church or the temple, often with the spectre of hell dangled in front of them is the most reprehensible of acts. It is time to jettison this part of religious thought for good. Religions would collapse under the weight of their own absurdity without child indoctrination. 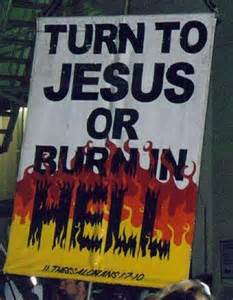 Shermer points out that not that long ago, when religion ruled our thinking, we unquestionably assumed witchcraft and blasphemy, not pleasing god in some way was the cause of all misfortune in the world. Fire, famine, plague, must be visited upon us by god because somebody sinned somewhere, someone(s) must be to blame, their heresy and dancing with the devil must have brought god’s wrath upon us. Somebody was evil we all needed to pray more and the heretics and witches must be rooted out and destroyed. And they were, and in droves. That gruesome pic at the beginning of this post was normal.
Nowadays we don’t burn witches and heretics by the hundreds or thousands if there is a flu epidemic or earthquake. Remnants of this primitive medieval thinking are instead laughed off as hopelessly absurd each time some Conservative Xian blames the abominable gays for bringing on hurricanes or 9/11, and the Ham/Nye debate highlighted the absurdity of attempting to maintain a medieval level of belief in the primacy of Scripture.

We have become incomparably and undeniably less religious and proportionately more enlightened and secular in the past 400 years. And the young, sans indoctrination and even in spite of it are becoming more secular (reasonable and tolerant) every year. It’s a beautiful thing.
We can do even better: End Religion Now.