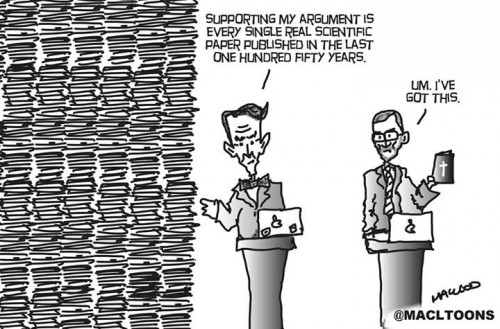 Folks sold on Creationism parrot phrases like these all the time but I suspect strongly they never consider the far-reaching impossible implications packed in those seven words.
For starters: C14 dating, the usual target of Creationists in discrediting scientific dating methods, which is ironic in itself as it is other dating methods which also use radioactivity (half-life radioactive decay) that give us the age of the earth and solar system.

There are over 130 radiocarbon dating labs worldwide. Not one, two or a dozen, but well over 100 and scientists of all kinds have been using this method for well over 50 years. These labs crank out dates for geologists, archaeologists, classics scholars and the like on a daily basis all over the world as routinely as the average citizen has a blood workup, and they have been doing so since the 60’s.
How likely is it they have been completely wrong day after day for years with 100’s of thousands (millions?) of samples??? How likely is it… they never figured it out.
How likely is it, not one of the millions of scientists who use this dating directly or indirectly in their research never figured it out. It’s as close to impossible as one can imagine.
But I’ve never heard anyone ever explain this to a Xian who has been told that “6,000 year-old” soundbite has gotta be true.

This is not a “competing worldview,” not an evil conspiracy against the Christian faith, this is ordinary science being conducted as routinely as having the technology of modern science produce an MRI image of your torn knee or shoulder. And it works, proposing otherwise is utterly insane. Ham and Comfort should be committed.

In fact by comparison, C14 dating is much simpler than the high field magnetics, radio-wave introduction into and echo from your body and incredible detection and image reconstruction mathematics and computer technology required for MRI.

We date organic materials that have been in the ground, uncontaminated by other carbon sources and get accurate dates up to 60,000 years now with C14. It works, every day of the week, and tens of thousands of dates have been published and peer-reviewed over the past 50 years.

It is not a lie, not a faulty technology that doesn’t work, any more than the bazillion routine blood lab tests and results also produced daily all over the world. The science works. Carbon 14 dating is as reliable as any other scientific test we employ every day all over the world, medical or otherwise.
AND there are over 40 different dating methods that use radioactivity and another dozen or so that don’t, ALL of which corroborate and inter-correlate with one another that we use to date artifacts, fossils, geologic strata, meteorites, the age of the earth.

So if the Ken Ham’s and Ray Comfort’s of this world are right, and “the earth is only 6,000 years old” all the technicians and scientists who run these C14 labs, all the labs that run all the other dating methods, all the labs analyzing ice cores, tree rings, lake sediments, etc etc… they are all wrong, hopelessly deluded and producing wrong data by the buckets every day all over the world.
And they have never caught on. They’re all wrong, have been for 5 decades, in tens of thousands of papers reviewed and used by millions of scientist all over the world over the same decades… all of it, all of them hopelessly, completely wrong because Ken and Ray believe the Biblical genealogies just gotta be right!!!

Does anyone see the complete impossibility of this?! We should bury every fucking Creationist with this.

Worse still, the same radioisotope chemistry that runs C14 and the 40+ other radiometric dating methods, also runs smoke alarms, PET Imaging, nuclear power plants, nuclear submarines, thyroid scans, food irradiation, nuclear weapons, radiation therapy, we have reactors running the power on the Mars landers…
We can get all this technology right to nth degrees of precision and accuracy in millions of applications, some which run 24/7 all over the world… but we can’t get the dating right. What complete bullshit!!!

Volcanoes. Consider volcano science: vulcanology. Take just one volcano we know the geology of: Yellowstone, for just one example of the hundreds of volcanoes we know have been active during recorded history.
Yellowstone erupted over 2 million years ago, again around 1.3 mya and around 600,000 years ago. We know this by those various dating methods that extend farther back than Carbon14.

This is not a “competing worldview”, this is real knowledge, not a lie, not made up.
All the scientists that work on earthquakes and volcanoes, the entire theory of Plate Tectonics, all the geology, vulcanology, all the tens of thousands of scientists involved and the millions of text books are all completely wrong if the earth was only 6,000 years old.

Meteorites and Moon rocks. We have been to the moon and brought back moon rocks a half a dozen times or more, and we have tens of thousands of meteorites from all over the world, many dated by various radiometric methods and we get 4.4-4.5 billion years for all of them… the age of the earth and the solar system, but of course all of this science is hopelessly wrong as well because Ken Ham and Ray Comfort say so!

We can put men on the moon, landers on Mars, send probes out of the solar system, map the genomes of hundreds of species, cure cancers, eliminate childhood diseases, run all the nuclear technologies I detailed above… but every date of all the bazillions of artifacts, fossils, meteorites, moon rocks, geologic strata, and now all the genetic studies that date species divergence times and genetic events in evolutionary studies… ARE ALL WRONG.
EVERY BIT OF IT… IF “the earth is only 6,000 years old.”

There is no reason not to be outraged and obnoxiously strident against the Creationist lie.