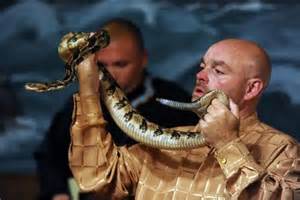 Fucking Unbelievable.
The oldest manuscripts of the Gospel attributed to Mark end at 16:8 and do not include the snake handling verses which were the good pastor’s main reason for handling snakes and thinking he could get away with it.
The endings of Mark (there’s 6 of ’em!, a post on that someday) were added later to be in agreement with passages in the other Gospels written after Mark.
Just think, some scribe, some church father 1,500 years ago or so added these “Gospel Truth” verses which gave this poor guy the justification to kill himself with a poisonous snake centuries later. Insanity.
You could call this guy an idiot, but he REALLY believed this crap.
He wasn’t born this way. He learned it. He was taught it and told he could not question it. Left alone he would have had a normal informed fear of snake venom.

Maybe his parents, his pastor, somebody in his spiritual past, all blinded by their faith, and prolly loaded with the same delusional “good intentions” indoctrinated this poor schmuck somewhere down the line. Left to his own devices he would have been a normal clear-thinking adult human. 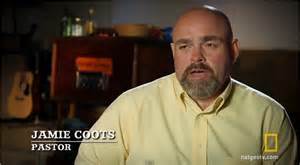