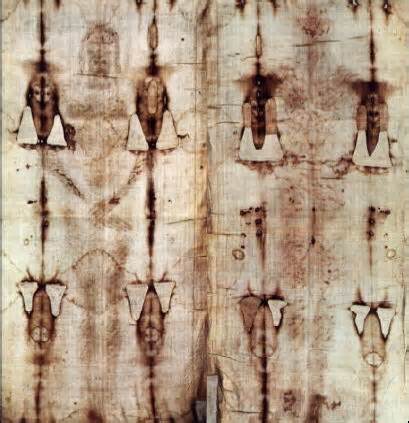 THE SHROUD OF TURIN!

So we know Ken Ham doesn’t like Carbon 14 dating because it exposes his absurd lie that the earth is only 6,000 years old: Information Kills Religion… sorry, pal.
The Shroud of Turin controversy has been raging on for a few years now with the pious desperately in search of some artifactual evidence of JC and his resurrection. Nobody trades much in pieces of the cross or bones of the saints anymore, although one can find little churches all over Europe and Asia Minor that claim to have some chunk of wood from Christ’s cross or tears or blood of a Saint, but most of that stays pretty local nowadays. The Shroud is a whole other matter.

Recently an article was published in what looks to be a standard science journal that proposes some rather speculative and far-fetched theories about the dating and origin of the image on the Shroud:

The religious types have not been happy that the Shroud was dated by 3 different C14 labs independently to 1,000-1260 AD, which is around the time that the Shroud first shows up in the historical record. Basically this new article by Carpentieri et al., claims that an earthquake around the time of the crucifixion caused neutron radiation to be released which not only made the image but recalibrated the C14 in the cloth to make it come out with the “false” later dating of after 1000 AD instead of around 30 AD.

You can read about the whole imaginative proposal at Jerry Coyne‘s “Why Evolution is True” here: It’s quite a stretch.
And Jerry’s piece got republished with additional critique from another secular skeptical scholar: Richard Carrier, the Classical Historian here at the New Republic: I wont bother with rehashing the details of Jerry’s devastating critique.

The journal this rather far-fetched piece was published in is called Meccanica, an Italian science journal that looks reasonably respectable.
From the Meccanica webpage:
Focuses on the methodological framework shared by mechanical scientists when addressing theoretical or applied problems
Includes contemporary research on general mechanics, solid and structural mechanics, fluid mechanics, and mechanics of machines. Includes full length papers; topical overviews; brief notes; discussions and comments on published papers; book reviews; and an international calendar of conferences.

Pretty normal for a highly specific journal within a subfield of physics/engineering.

So how did a highly speculative paper on the Shroud of Turin’s C14 content being somehow altered by hypothesized neutron emission from an undocumented earthquake that also by some other unknown process of said neurons produced the image of Christ wind up in Meccanica?
How the fuck does something like this get through the peer-review critique and analysis to get pubbed in a seemingly respectable engineering journal?

It didn’t.
The first author is the editor of the journal. He published his own bullshit in his own journal. Unbelievable balls.
Jerry’s critique from either his website or in the New Republic is excellent as always.

And I’ll add my own two cents:
An engineer who may be a whiz at structural or fluid mechanics doesn’t do earthquake research, and may not know shit about them. Also someone with expertise in this branch of physics may not have relevant background in particle physics or atomic chemistry, or know much about neutron emission, much less specific research on neutrons effecting other elements and their isotopes, nor the even more speculative suggestion of some sort of neutron imaging.

One of the comments on Jerry’s New Republic piece says it all:
Scientists who use stable isotopes like 13C and 15N for well-accepted purposes like inferring carbon sources (C3 vs C4 plants) or trophic position know that C and N are incorporated into plants and plant products like cotton and linen as the plants grow. C is fixed from atmospheric CO2. I can’t think of a plausible mechanism where the 14C signature could be altered after the plants are harvested, spun and woven into cloth. This is testable, but I doubt if the people who did this work thought this through…
The paper in question would never have made it through even a cursory peer review in a real scientific journal. (emphasis mine).
And peer review is the standard – if you claim something extraordinary, be prepared to answer a lot of questions and criticisms about how you are probably wrong.

Peer-review? Scientific vetting of ideas and information? Fuck that. I’ll just publish in my own journal. Hey, I’m the editor, what are they gonna do?
So Ken Ham hates C14 dating without reservation, and Dr. Carpentieri knows enough science (maybe not so much about research, eh?) that he can’t just dismiss it like Ham but he desperately wants C14 to work for him in support of his preconceived religious convictions, and thereby will propose absolutely absurd ideas and sneak them around the normal vetting process to give them credibility they don’t deserve.
Such is “The Arrogance of Religious Thought.”™