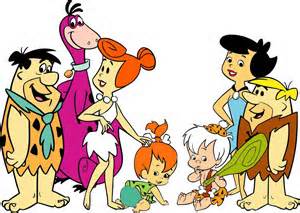 “Bill, why do you bash religion? Did one of the Nuns at St. Mary’s Catholic Grade School break a ruler over your knuckles once too often? Are you angry at God? Was Father friendly?” No, No and No.
Half of this great country of ours either outright denies evolution or has suspicions or reservations about it being true.
And its all due to religion. Conservative Xianity in particular, religious thought in general. And the attack on science is broadening to include the Big Bang, embryology and what we know about the female response to rape. How did so many Republican politicians manage to become “experts” on sexual assault, saying the dumbest things imaginable? The same way that 50% of Americans came to doubt evolution and think the Flintstones could be a documentary:
Xian propaganda, plain and simple.
Your minister certainly wouldn’t lie to you, therefore the jamoke your minister brings in who usually has a technical degree like math, engineering or physics and doesn’t do biological research or know shit about evolutionary biology, genetics, or paleoanthropology (human evolution) who fervently explains to you why evolution can’t possibly be right because it not only conflicts with his literal Biblical interpretation, but it will make you a godless heathen, negate all the reasons for any sense of morality, accelerate the impending gay takeover, ruin the finish on your car and is probably fattening as well. He can’t possibly be lying. And their soundbites laced with Biblical language and references sound so plausible “Oh, it’s gotta be true!” Well, Harry Potter and the Lord of the Rings sound plausible too, but, THEY ARE FANTASY.
Wilma and Fred ever having Brontosaurus steaks is abject FANTASY as well, beyond any reasonable doubt.
Creationism is the biggest lie ever perpetrated on the American public. That motivates the hell out of me (pun accidental, but I like it!). It ain’t the only reason, but its right up there in the top 10! And the many other reasons to stick it to religious thought will be the subjects of many a future blog fer sure.
The secular movement which grows stronger by the minute, needs to take the offensive with the science denialists.
As Defenders of the New Enlightenment, we need to take it to the Bullshit peddlers at every turn. The best defense is a good offense and instead of just responding to Creationist attempts to promote their beyond stupid fantasies in our schools, we should be educating the American public. This blog will feature evidence from the many domains of science that show Creationism to be as utterly implausible and impossible as it is on a regular basis.
It’s time we expose the fraud. Let’s take it to them.

Watch the incomparable Lewis Black expound on the OT and Creationism and show us how its done.