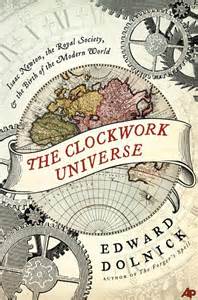 “The Clockwork Universe: Isaac Newton, the Royal Society and the Birth of the Modern World” by Edward Dolnick.
I love this book at a dozen levels, I’ll just relay a couple of them here. It paints such a clear picture of when religious thought ruled the Western world, yet from this primitive, superstitious, and very bleak view arose the perspective of modern science that underneath the terrible capriciousness of life (God’s just punishment for a world of inveterate sinners) there was also a regularity and completely uncapricious order to the natural world, which could be discovered and described by laws, mathematical laws.
“Disease was a punishment ordained by God. Astronomy had not yet broken free from astrology, and the sky was filled with omens” — from the Preface

Dolnick’s descriptions of the filth of London in the late 1600’s, the Great Fire, the plagues, routine torture, and beheadings, an astronomical murder rate and the heads of criminals and political and religious enemies skewered and displayed at the entrance to London Bridge provide the backdrop for the great awakening of modern science by Newton, Galileo, Kepler, and others which became the impetus for the Enlightenment perspectives we take for granted today: that the world has order that we can discover, describe, and harness to the benefit of all mankind. Despite the unquestionable religious motivation of these men, all thought they might unlock the code to God’s mathematical universe, all to his glory, yet tellingly in a foreshadowing of perspectives to be adopted much later in the modern practice of science and the secular outlook on the world, God is not mentioned in the data, the observations, the theory, the mathematics, the equations.

Newton may have spent as much time attempting to decipher Revelations or conduct alchemy experiments in search of the philosophers stone which would transmute lead into gold as he did on universal gravitation, inventing calculus, and discovering the true nature of light. He was a product of his time, unquestionably devout, but oddly enough like modern scientists, even the few believers among them today, he left his religion at the laboratory door.

Dolnick weaves an excellent and very readable story of mathematics from Zeno and Euclid up through Descartes, Newton, and Liebniz intertwined with the observation and theory of Copernicus, Brahe, Kepler, Galileo, and of course Newton as the book is as much his biography as it is one of the beginning of science discovery and the birth of the modern world. It is a tapestry of perspective on how the human predicament, dominated by religion and ignorance, would eventually be wrested away from both by the work of a few men, Newton principal among them.

A must read for anyone interested in the development of our modern existence (where clean water, the eradication of childhood disease, emergency rooms, vacations, and smartphones are taken for granted) and the expanding New Enlightenment outlook that continues to draw us away from superstition and the idea of a vengeful god.
Often when I hear some preacher or devout (usually Evangelical) Xian speak of the “depravities” of the modern world: children sexting nude pictures to their friends, expanding marijuana use, the “godlessness” growing among the young, claims that evolution, the Big Bang, and even embryology are “lies from the Pit of Hell” and that we of course need a return to “old time religion” and eschew the vices of our dastardly modern, all too secular world, I think of Dolnick’s vivid portrayals of impossibly bleak and superstitious 1600’s London and thank (not god, nor my lucky stars) that despite religious thought yet being a formidable force in our culture even now, it no longer rules the day and men like Newton and others left their magic aside long enough to propel us into the modern world.