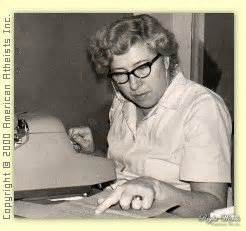 Madalyn Murray O’Hair: her opening statement to the Supreme Court, 1959. I was 5.

What a depraved worldview, right? No wonder the Xians then and now despise us Unbelieving Scum.
We don’t believe in an afterlife and concentrate on this one and making it better, for all.
We prefer a hospital to be built that all can use and benefit from regardless of faith or lack thereof instead of an exclusive club where useless rituals of benefit to no-one are conducted.
We believe in evidence and reason over scripture, superstition, authority, and faith.
We believe we are all our brothers keeper, and denounce the false divisions of religious beliefs.

We are the people your minister warned you about. Godless, unchurched…must be immoral, right?
Ha, read Madalyn’s manifesto above. It speaks for all us Non-believers. We have removed the roadblocks religions bring to thinking, acting morally to ALL our fellow man.

She like Robert Ingersoll a century before her (and Lenny Bruce at the same time as her) had the 24 karat audacity to stand up against the overwhelming Cultural Inertia™ of the time, against the unquestioned accepted and religious stance and privilege of 50’s-60’s US.
This was NOT an enlightened time. The “Rights Revolution” we all take for granted: civil, women’s, gays, and now the one decade old New Enlightenment weren’t even whispered of yet.
This lady had balls.
I was 10 when Life magazine referenced her as “the most hated woman in America.”

I think she would be more than pleased to know that there are so many more of us Unbelieving Scum “coming out” and being counted 50 years after her heroic efforts to end having the Bible shoved down our throats in schools. Her lawsuit helped accomplish that a year after another court case struck down officially sponsored prayer in schools.
Thanks for showing us the way. 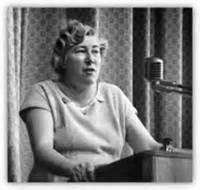