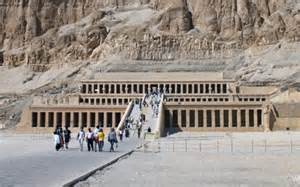 Deir el Bahri. Queen Hatsepshut’s Temple (1473-1458 BC) Luxor, Egypt.
I’ve never had a passport. Hope to be able to put one to use someday.
This place was on the bucket list since grade school.

Frank Lloyd Wright had nothing on Hatshepsut’s architect Senenmut. He expanded on the Theban style of colonnades and terraces of previous temples nearby to create this masterpiece… excerpted from the wiki:
“The main and axis of the temple is set to an azimuth of about 116½° and is aligned to the winter solstice sunrise… The sunlight penetrates through to the rear wall of the chapel, before moving to the right to highlight one of the Osiris statutes that stand on either side of the doorway to the 2nd chamber. A further subtlety to this main alignment is created by a light-box, which shows a block of sunlight that slowly moves from the central axis of the temple to first illuminate the god Amen-Ra to then shining on the kneeling figure of Thutmose III before finally illuminating the Nile god Hapi. Additionally, because of the heightened angle of the sun, around 41 days on either side of the solstice, sunlight is able to penetrate via a secondary light-box through to the innermost chamber.” 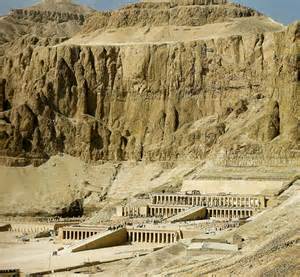 Phenomenal.
I’ve been able to experience places like this and other lands, cultures, cities, cliffs, volcanoes, and archaeological sites, even Siberia, through the countless books I’ve read, like the Ancient Egypt over-sized photo books many a person poured over as a child or as an adult.

Deir el Bahri is nowhere near the top of the bucket list right now however, whereas the English countryside, Hawaiian volcanoes, Meteor Crater, the Grand Canyon and, number one, the Paleolithic Cave Art sites of Southern Europe all still top the list.

Also from the wiki:
“In 1997, 58 tourists and four Egyptians were massacred there by Islamist terrorists from Al-Gama’a al-Islamiyya in what has been called the Luxor massacre, causing a reduction of tourism in the area.”
No shit.
“The six assailants were armed with automatic firearms and knives, and disguised as members of the security forces. They descended on the Temple of Hatshepsut at around 08:45. They killed two armed guards at the site. With the tourists trapped inside the temple, the killing went on systematically for 45 minutes, during which many bodies, especially of women, were mutilated with machetes. They used both guns and butcher knives. A note praising Islam was found inside a disemboweled body. The dead included a five-year-old British child and four Japanese couples on honeymoon.”
Try to wrap your head around that. Women mutilated (you hope they were already dead) children killed, all to service religious justifications.

When the Muslim Brotherhood was elected in Egypt a year or so ago among the many classic incidents that epitomized the insanity of religious thinking, this one may have topped the list:
“In June 2013 Egypt’s former president Mohamed Morsi appointed Adel el-Khayat as governor of Luxor; El-Khayat is a member of the political arm of Al-Gama’a al-Islamiyya… He resigned less than a week later.”
I remember reading about the uproar from the hotel and tourism industry in Luxor (and all of Egypt) when Morsi had the 24 karat chutzpah, to appoint Luxor a governor who belonged to the very same terrorist group that slaughtered all those tourists at Dier el Bahri barely 15 years before…
A slick public relations move on Morsi’s part to comfort the international tourist community, eh?
Whattaguy!
Unfuckingbelievable.

And we wonder why 33 million Egyptians took to the streets and threw out the elected Morsi and Islamic Brotherhood and brought back military rule, for better or worse?

Egypt’s tourism industry is still down disastrously and what’s left is now mostly (80%) Saudis and tourists from other Arab countries while most of Asia, Europe, US, etc., still have travel advisories in effect. Some tour operators have NO customers at all.
For an informative and depressing update check out: Egyptian Tourism’s Message to World: Come Anyway.

No surprise anyone not from the Mideast or a fellow Arab country doesn’t feel terribly safe in Egypt right now. And I couldn’t find any specific data, but I’d guess most of the Muslims from Saudi for example are using their passports to visit Islamic shrines and temples in Egypt and not the infidel heathen false-religion sites… no matter how incredible the architecture.

So for now, I suppose I’ll rely on the old standby of vicarious travel through the words and images available in my books, and now at the phenomenal lightspeed and unlimited images and videos of the Internet!
Maybe before I croak I’ll have the wherewithal and the opportunity to travel safely to one of the most impressive pieces of architecture anywhere, from anytime.

Hitch was right, religion poisons everything. 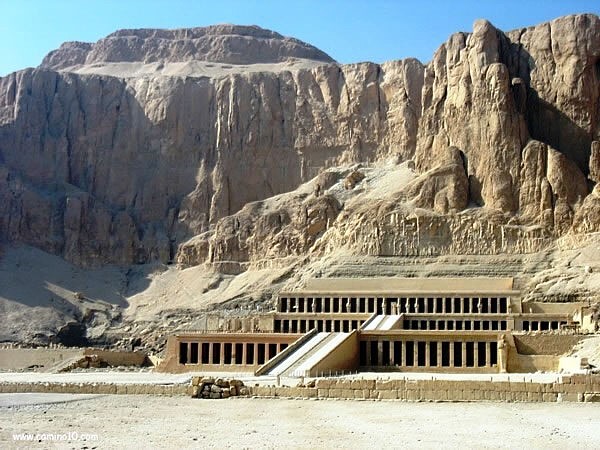