Professor Ehrman delivers an excellent lecture on his views on how Jesus, to him definitely a historical figure, became thought of gradually in early Xianity as God, when in the earliest Gospels and NT writings he was not portrayed as nor claimed himself to be god. His explanation based on various 1st Century cultural understandings of divine beings is well worth the listen. The lecture is drawn from Bart’s new book “How Jesus Became God.” 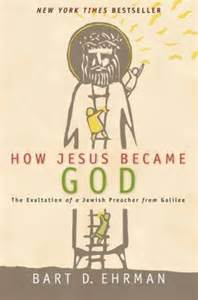 What interests me the most however, is his echoing of the common retort that we must not be too strident as non-believers and shouldn’t challenge Conservative Xian’s thinking and faith too harshly as they will put up the wall and not listen.
At 54:30 in response to a question from the audience Bart describes the formidable cognitive and social confines of Fundamentalist/Evangelical Xian belief. He ends his response at the 57:00 mark after describing a recent encounter with a typically obstinate and compartmentalizing Fundamentalist student of his concluding that “I just don’t think there’s any way in, (an) inroad“… to break into the Fundamentalist closed and self-contained system.

Yet Dr. Ehrman himself is living proof as is his host Dan Barker, that there is a way in!

Both men were every bit as denying and recalcitrant Xians, as adamant in their Fundamentalist beliefs as Ehrman’s student: additionally as schooled in apologetics as the best of them!

On the contrary I contend that every bit a of hard-sell, soft sell, subtle or blatant challenge and critique of religious claims and beliefs helps to penetrate even the most hard-core believers, if not immediately (which given our very human psychology of saving face rarely happens) but for much more than a few, eventually. Many take pause and question their supposedly unshakeable convictions at some point down the road. Just as Ehrman and Barker themselves did years later, as so many do.
Every question, each challenge, every attack knocks another brick out of the wall. It takes years for most for that wall to wobble and crack. At very least, the Fundamentalists are forced to accommodate their views to the reality of the changing social perspective that is produced by both subtle and also strident critical examination of religion.
For example, it was easy to condemn homosexuality publicly without consequence in the 50’s and rest completely assured gays would never be able to marry, not so easy today.

It took both Ehrman and Barker into their 30’s to let go gradually of their teenage Evangelical Xian surety: the result of child indoctrination. Both men were every bit as hardcore if not moreso than the student Ehrman describes.
And add the non-believer authors John Loftus, Seth Andrews, Jerry DeWitt and the like, who have also written of their de-conversion from Evangelical extremism. Then consider the countless others who didn’t write a book of their turning away from faith.
I think no matter how often a Xian may cover their ears and go “la, la, la” in front of you while defending their beliefs… they’re not stupid. They are just saving face as anybody would. No-one likes to look foolish and it takes a long time of personal mulling over and gradual decision making to come around. The information is difficult to ignore and most Xians are forced to defend their beliefs in their own minds at very least… and that starts the process, the inkling, the nagging realization that such beliefs are not defensible, not logical, not true. Xians are not stupid and the more they learn of their faith, the harder it is to hold.
Not everyone will deconvert of course, but so many do, have done so, that the more we keep up the consciousness raising, changing the underlying assumptions of culture and add to the logic and data that displays the absurdities and improbabilities of Xian claims, the more walls will come tumbling down.

There is a way into the Fundamentalist system and Professor Ehrman himself is living proof.
We have to thank him not only for sharing his personal story of education and doubt but through his books and lectures for doing more to bring the scholarly knowledge of Biblical History and Criticism to the general public than possibly anyone in history. Whether you agree with every one of his theses or not, he has made the critical examination of religion, Xianity in particular, as mainstream as anyone alive today.
Thank you, Dr. Ehrman.