Trapped in Religious Bullshit? Check out this reddit post:
“My Parent’s Pastors Who are Jehovah’s Witnesses, Told me I’d get Aids and become a Homosexual if I Keep Smoking Weed /rant.”
And read the comments.

Does anyone wonder why the younger generation smells the nonsense of religion?
THEY KNOW TOO MUCH. THEY ARE NOT STUPID.
The retarded crap that fundamentalist religions try to get away with doesn’t wash anymore in today’s Information Society. Think of every idiot comment Republican politicians have made about women’s issues over the years: rape, pregnancy, prenatal development, birth control, etc… all wrong, near ridiculous, and damn near every one of them with the exception of Rick Santorum, a Baptist!
No Jehovahs that I know of. Yeah, I know I could Google it right now, but WGAF? Maybe Jehovah’s can’t run for office or they are so universally despised that they would have less chance of getting elected than one of us Unbelieving Scum™ atheists? I wonder if PEW Research has any data on that?

Regardless if you read the stifling conditions this poor kid has to live under remember that his misguided parents love him and think they are doing what is best for his life and especially for the salvation of his eternal soul. SOMEBODY convinced his parents of this fantasy and this kid like many others growing up Conservative Xian of some sort have to put up with this bullshit. Any wonder why so many of us rail against religious child indoctrination? It is the only way this absurd misinformation survives.

And if you think this kid’s situation is bad (it is), consider that a good majority of Islamic kids growing up all over the world experience at least as repressive if not far worse authoritarian upbringings where you don’t dare question religion. Most of Islam is like Conservative Xiansanity™, x10, on steroids… and then there’s the real “extremists.” Few of us can imagine the complete pervasiveness of Islamic practice and ideology in many Muslims daily life.

Check out the stories from Muslim kids here at The Ex-Hijabi Photo Journal for a taste of what their life is like.

They all live in Jehovah Witness like conditions, only the whole family, their entire neighborhood, the surrounding culture, the government in most Islamic countries, the TV stations, 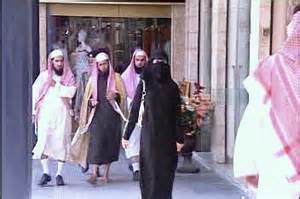 even the religious police at the Mall in Saudi Arabia are all in on it, smotheringly worse than this California kid’s Jehovah Witless™ parents and his pastor.
As I’ve mentioned before Aayan Hirsi Ali calls Islam a “mental cage.” It is.
This US kid has a good shot at getting out of the religious insanity. How many Muslim kids around the world have no hope of a free life?
End Religion Now.