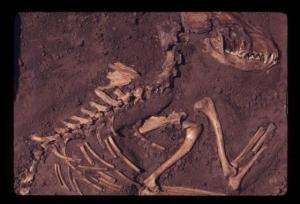 “Dogs Likely Originated in Europe More than 18,000 Years Ago” is an excellent summary published in SCIENCEDaily.
The source article was published in Science Nov 15th as the cover story under the more descriptive and mundane title of:
“Complete Mitochondrial Genomes of Ancient Canids Suggest a European Origin of Domestic Dogs”

We have this stuff. We know this stuff. This work is going on daily despite the ridiculous pleadings of Ray Comfort, Ken Ham, and others who insist ALL this data and oceans more of it must be hopelessly wrong. The thousands, tens of thousands of researchers involved in evolutionary studies of all kinds are utterly misguided just because these two yo-yos and their couple of PhD.s demand that THEY KNOW BETTER than all the scientists practicing in those fields… the hubris is staggering as to almost be admired for the sheer audacity of it.
And that is what must be conveyed to the American public:
That Creationism is not only the biggest lie ever perpetrated on the American public, but it is so ludicrous as to be ignored for the pseudoscience that it is.

Check out the 31 authors named above:
In those 31 names see how many different nationalities or ethnic groups you can recognize at a glance. You can bet there are a few females in there among the folks who represent peoples from around the world. Science is a very democratic, egalitarian undertaking, one who’se data is also shared by all of us, all over the world.
Ken Ham’s in house “scientists” must be awful busy figuring out how to refute, or explain away the multitude of studies like the one above that are published daily across a dozen disciplines that support evolution from all over the world.
And just think Ham’s scientists and Ray Comfort already know ahead of time those 31 researchers listed above are wrong at best, delusional at least.
Ken and his PhD’s and Ray and his banana “know better” than all 31 of those folks who actually work in the field. Who do the labwork. Who study the actual science.
Right.
The juggernaut of science (read free human inquiry, unfettered by extreme religious hoodwinking) rolls on quietly in labs, in the field, in classrooms, and journals all over the world. Daily.
Ken and Ray: Get used to it.