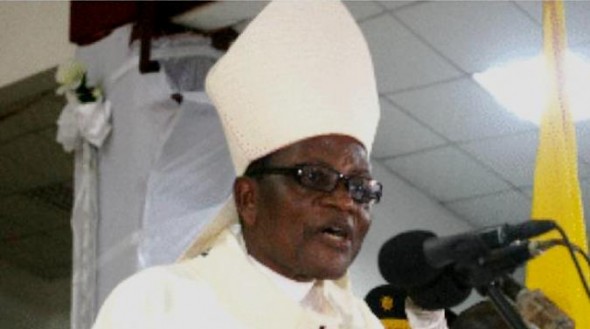 Archbishop Lewis.
And the headline from Church and State reads:
Catholic Archbishop: “Ebola is punishment from God for homosexuality.”

In the 21st century, what sort of thinking underlies this level of lunacy, of sheer idiocy, and ugly incitement of repression and violence and abject science denial? Religious thought alone.
What could be more arrogant in proclaiming from a position of utter ignorance that you are certain your imaginary god is punishing a group of humans for a sexual behavior that is proscribed and demonized in the 2,000 year old writings of a rather primitive culture from one small corner of the world and from a time of abject ignorance and cruelty?
You know what’s more arrogant?
Our “wonderful” new Pope who many fawningly declare is a progressive and caring, kind, humanitarian individual remaining completely silent on the idiocy and cruelty his underlings like the good archbishop here spew.
Where is Pope Francis denouncing this obnoxious stupidity and apologizing on behalf of all Catholics everywhere, the vast majority of whom are intelligent people of normal human empathy and sense to know this buffoon does not speak for them?
The Pope’s silence and complicity is as much a prime example of the “Arrogance of Religious Thought” as this clown’s idiotic and hateful proclamation.
When people are taught their “scripture” is a bona fide, unquestionable revelation from their god, this is how they behave.
This is where the true arrogance of religious thinking begins, with the conviction that you know better than everyone else how the world works because you are certain your prophet really talked to god while everyone else’s prophets merely heard voices in their head. Right.
This is the arrogant lie we must stop teaching children in every religion.
End Religion Now.