Check out Carly Fiorina, former HP executive on Bill Maher’s Real Time show about Charlie Hedbo.
At 13:40, she exclaims “It is not religion, it is not religion” objecting to Bill’s moving from Islam to all religions being at fault for problems like terrorism in the world.
Ms. Fiorina’s reaction is mainstream and understandable given our modern culture’s apologetic stance on religion in general.
But Bill is right. It is religion writ large that promotes inhuman behavior, whether the insane terrorism of the many Islamic groups or modern Xianity’s more subtle and often overlooked horrors. Children die daily due to the Catholic Church’s insane birth control policies, the extent of which I have blogged on in detail HERE. The same “Holy Mother Church’s” obscene worldwide child rape and abuse scandal and ongoing coverup is another glaring example of the despicable acts enabled by religious thought and power.
Less noted however, is the quiet, minimally reported, unobtrusive, one at a time deaths of LGBT kids due to suicide promulgated by the absurd ideas of Xiansanity (TM) and other religions. I blogged on a recent example HERE. These sorts of deaths occur daily all over the world, one at a time and not in splashy horrific mass attacks like Charlie Hedbo or 911. How many lives are ruined, how many are taunted, tortured and resort to suicide because of Xian attitudes and repressive behaviors towards LGBT kids worldwide? The sheer numbers may well be appalling.

Let’ examine homophobia from Xianity alone and its effect on kids.
There’s roughly 2 billion Xians on the planet, at the 8% figure for LGBT folks in the general population that makes around 160 million gay, lesbian and transgender Xians.
The world suicide rate ranges from a high of 83/100,000 (.08%) in Greenland to a more common range of around 2-20 per 100,000 in most countries with an average of 10/100,000 (.01%), as reported for Australia for example.

Using data cited from a number of studies the Wiki on LGBT Suicide reports LGBT adolescents are “8 times more likely” than heterosexual teens to attempt suicide.

Similarly, another study reported by Healthyplace that LGBT teens are 3x more likely to commit suicide.

Finally over at Religious Tolerance estimates on US suicide suggest an additional 1,200 LGBT adolescent suicides per year, again just in the US alone with only 1/8 of the world’s Xian population.

So, using the average worldwide suicide rate of .01% times 160,000,000 LGBT Xians worldwide gives us 16,000 “normal” suicide deaths within that population.
And using the mid-range estimate of 5x higher for LGBT kids from the Live Science report that would give roughly 80,000 worldwide deaths of LGBT kids (and adults).
Another 64,000 deaths per year due to homophobia?
Homophobia promulgated at various levels by the different Xian denominations?
Even if we use a very conservative estimate assuming the rate was only double, that might be an additional 16,000 deaths due to Xian homophobia worldwide….
16,000…per year…

Add in the deaths in African countries from the persecution, jailing and killing of LGBT people due directly to the efforts of US Evangelicals and you have quite an ugly picture.
According to a recent report by the Institute for Economics and Peace deaths due to worldwide terrorism reached nearly 18,000 mostly within Islamic countries due to Muslim-Muslim sectarian violence. Similarly a 2012 report from START(Study of Terrorism And Response to Terrorism) provides the following graphic: 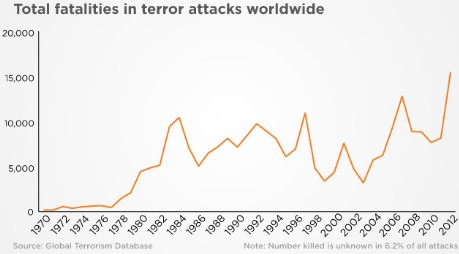 AND maybe Xiansanity (TM) alone is responsible for at least that many LGBT deaths, mostly in adolescents due to suicide every year…or maybe 2,3, 5 or 8x that amount.

Ms. Fiorina’s response is typical for a religionist. She is associated with the conservative Xian Willow Creek mega church near Chicago. However, being a former high-level executive and board member of a number of corporations well-versed in financial reports and statistics, I wonder if she took a good look at these numbers and saw how Xiansanity (TM) whether in the guise of Catholic Church dogma restricting birth control or most of Xianity’s repressive homophobic ideas may be responsible for more deaths of children and adolescents worldwide in orders of magnitude way beyond the grisly, sensational acts of Islamic terrorism, if she might “see the light” just a bit?
IT IS RELIGION.
Religious thought ruins lives and kills people all over the planet and it ain’t just Muslims.
And we need to diss it, big time, Real Time, all the time.
Information Kills Religion.
End Religion Now.