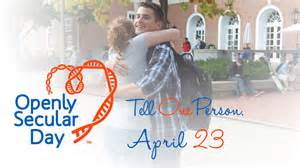 The Richard Dawkins Foundation is sponsoring the Openly Secular campaign to raise consciousness about non-belief and non-believers no matter what stripe you are: atheist, agnostic, deist, secular humanist, even questioning theist who has discarded most of religions demands and embraced secular humanism.
The foundation has established its own website: Openly Secular.
This short video by the Friendly Atheist, Hemant Mehta does a great job of explaining Openly Secular Day which is TODAY Thursday 4/23/15 and the purpose and scope of the ongoing Openly Secular endeavor:

So, like Hemant says what the Openly Secular folks would have all of us Unbelieving Scum do today is come out to at least one person: let someone know you are a non-believer.

Media coverage and public acceptance of the rapidly growing non-believing, non-religious among us is improving all the time, as evidenced in the following segment which appeared on CBS Morning News but a few days ago! Raising consciousness and dispelling religious misconceptions (propaganda) about non-believers and non-belief is going mainstream.
Check it out:

I’ve mentioned before that the New Enlightenment movement is chunking along quite nicely and Openly Secular is but one more example of the constant and ubiquitous discussion and critique of religion going on across all forms of media. For an old guy like me who remembers the only “atheists” in the public perception of the 50’s and 60’s were the universally hated Madelyn Murray O’Hair or the dastardly USSR and Red China Communists: Khruschev, Mao, Stalin…godless monsters all, campaigns like Openly Secular are just what the doctor ordered. Dr. Dawkins, that is.

How times have changed in 50 years! And they are changing for the better faster than ever before.

Thanks once again to the tireless Richard Dawkins who is as responsible as anyone for the incredible progress of the New Enlightenment over the past decade. 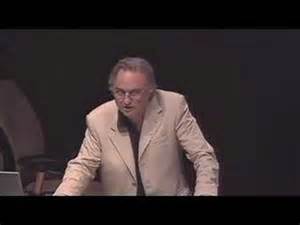 Information kills religion and Professor Dawkins and his RDF are spreading the information, enlightening the modern world about science and secularism on an unprecedented global scale.