Why we don’t believe and why non-belief is growing.
I recently searched a number of local non-believers groups in the Chicagoland area thru meetup.com. Reaffirming the findings of the recent PEW Research poll documenting the rise of the “Nones” to nearly a quarter of the US population that has been commented on all over the media of late, I found 13 different secular groups within a 50 mile radius of my house, representing over 4,000 members!
Just 10 years ago you might find a chapter of the American Atheists or American Humanists near Chicago but that would be about it and their memberships combined would be in the low dozens at most.
In addition, there are now 6 Secular Student Alliance (SSA) groups running within 50 miles as well at Chicagoland colleges and universities. The SSA now has nearly 400 affiliated campus and high school groups in the US. A decade ago when I helped form the NIU (Northern Illinois University) Atheist, Agnostics and Freethinkers we were number 75 on the SSA list. How times have changed.

Wanna know why?
The image above indicates the unsolvable problem of “religious pluralism:” the conundrum that there are so many religions with equally absurd competing claims that are “oh-so-certain” they are right. Most non-believers whose personal testimony I’ve heard as to why they don’t believe often starts there. With a little education on the dozens of prominent religions each proclaiming they alone got the real goods on god(s), the afterlife, how you must worship and behave, one easily sees how impossible the correctness of any religious faith claim truly is.

Besides religions being absurd they don’t live up to the claim of being good for mankind a fact which it is becoming more apparent every day: 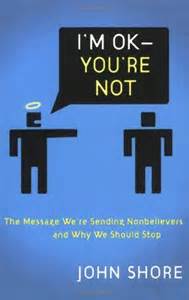 The above book jacket spells out another key reason I’ve heard often from secularists who for the most part having been brought up in America were believers once too, their family belonging to a Xian church of some kind earlier in their lives;
Divisiveness.

Even the Evangelical youth of today are weary of the homophobia, condemnation of others and smug attitudes of many religious figures always ready to tell someone else they aren’t living right or doing Xianity right. Us secularists have had it with the phony posturing of the “religion of love.”
AND we are fed up with the intrusion of religious thought throughout our society and political system.

Bill after bill is introduced in our legislatures that try to restrict women’s and gay’s rights…all based in mostly Conservative Xiansanity (TM). It is obnoxious and intrusive. It is not “Religious Freedom” as the Catholic bumper stickers proclaim, it is religious imposition.
Hey, I dont go to your church! 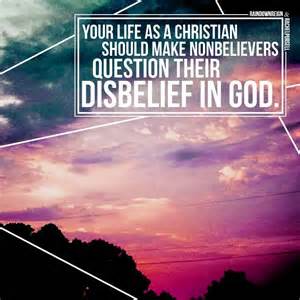 The saying above is a typically clueless Xian aspiration that usually backfires for the reasons I speak of above. Xians arent special. They dont have a higher moral ground that will somehow convince us nonbelievers to come to the right thinking. That thought alone is obnoxious. The average, moderate Xian is just like anyone else and they are reasonable kind people and their behavior isnt anymore saintly nor sinful than the next person’s; believer or not. But all Xians support a belief system which facilitates and promotes the bad behavior of more than a few. And that’s the biggest problem of all.
Besides promoting delusions and the other evils of religion, it promotes more violence, overt and covert as much as any political ideology ever has.

Xiansanity(TM) promotes the divisiveness, homophobia, misogyny and science denial that many perform. Islam is horribly worse, having never undergone any sort of reformation, in producing incredible repression and violence as the world is fast coming to realize. All religions are absurd, and intrusive and harmful to varying degrees.

THIS is what humanity should be spending its intellect and resources on:
Improvement of the lot of mankind.

Instead of arguing over absurd old claims about who watches over us, or the silly hope of an afterlife and continually fighting the primitive patriarchal rules the religionists want us to follow to appease their false authorities, their imaginary gods, we could be going ever faster in making this world, this life a better one for all of us. 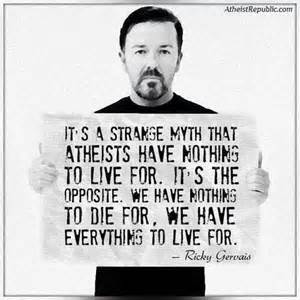 Rick’s right and so was Marilyn. Without religion you have everything to live for and it no longer gets in the way.