In this 2007 TED talk the Developmental Psychologist and Linguist and Steven Pinker previews his 700 page monster of data and perspective published in 2011: 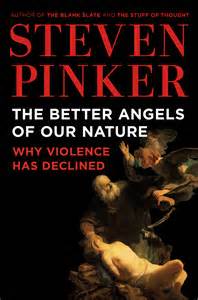 Pinker in the opening phrases of his talk:
“Our ancestors were far more violent than we are, (that) violence has been in decline for long stretches of time, and that today we are probably living in the most peaceful times in our species existence”

He admits immediately that questioning the standard belief, the cultural assumption of each generation that the current times are the worst imaginable and only going to get worse (my emphasis): the eternally pessimistic and foreboding view upheld mainly by organized religion especially Conservative Xiansanity (TM) is utterly wrong in light of the data.

Pinker again:
“…a statement like that might seem somewhere between hallucinatory and obscene, but am going to try to convince you that that is the correct picture”

He then demonstrates using the data that the typical view promoted by the religious is exactly wrong. We are living in the safest, most peaceful times in millennia and this moral advance is largely due to the Enlightenment and continued secular advance of human rights through the centuries.
Few people consider that the risk of enslavement, torture, robbery, rape, imprisonment and murder were constant threats, a normal aspect of daily life for most humans throughout history from hunter gatherer times to only recently in the latter 20th and now 21st century. One could be jailed and tortured for petty crimes or religious indiscretions, taken into slavery or indentured servitude, beaten and robbed by highwaymen with no recourse, no retribution.

Nowadays most of the world’s citizenry enjoy the safety of multiple layers of police and armed forces protection, torture and capital punishment are nearly universally outlawed and slavery illegal worldwide. Deaths from wars and genocides since the two World Wars have dropped precipitously as well, a fact few understand until they see the data. The horrific political ideologies of the past (Stalinism, Nazism, Maoism) have been recently replaced by the rise of democracies across the globe and most religions no longer kill for apostasy and torture for coercion routinely as was the norm for much of the past two millennia. We live in an incomparably less violent world.

The TED talk is an excellent 20 minute summary of the voluminous information and thrust of the book. The data and arguments amassed in “Better Angels” are impressive to say the least.
To me, it represents the best of modern scholarship and to my mind utterly refutes the standard negative views so falsely and smugly upheld by religions. Religionists (particularly our Conservative Xian friends and neighbors) don’t bother with facts, they make shit up and make sure it is negative and full of warning to repent and join the fold, the end is near: and man is inherently wicked and cannot advance without divine guidance and obedience to religious claims. Conservative Xians notably seem to be chock full of dire warning that we are doomed and in a state of precipitous, inevitable and continuing decline.

And that’s a crock. We have improved the lives of countless humans in the most recent decades and can do even better continuing with the knowledge that we have done so in spite of religious divisiveness and phony claims of innate depravity and impending doom. These old ideas only get in the way.
Pinkers TED video is a gem and the book itself is an encyclopedia of moral progress and the expansion of rights and safety and lack of violent threat to the vast majority of the folks on the planet today.
Once again religion is wrong and but an impediment to progress.
end religion now.