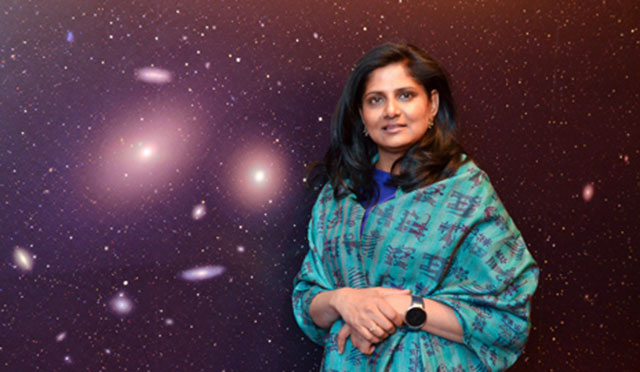 I have blogged recently on women who have become popular science educators and promised to feature women scientists as well. First up is Dr. Priyamvada Natarajan, professor of Astronomy and Physics at Yale who discusses our current state of knowledge or lack thereof of Dark Matter and Energy in another most excellent Edge conversation.

“Despite not knowing what the dark matter particle is or what dark energy really is, we still have a very successful theory of how galaxies form and evolve in a universe with these mysterious and invisible dominant components. Technology has made possible the testing of our cosmological theories at a level that was unprecedented before… Our current theory, despite the embarrassing gap of not knowing the true nature of dark matter or dark energy, has been tested to a pretty high degree of precision.”

“That’s where I have placed myself, and I’m working on trying to use the best datasets to see what give there is, what inconsistencies might pop-up between theory and the state of the art observational data.” 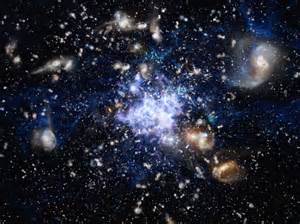 One of the things Dr. Natarajan works on is the clumpy uneven distribution of dark matter that is revealed through the analysis of the clustering of galaxies held together by the gravity of dark matter.
Images like the one above represent just a smattering of the data she analyzes to theorize and discover the properties of dark matter.

Natarajan again:
“The allure of a career in cosmology will always be there. As a young girl growing up in India, I started out being an amateur astronomer. I looked through a telescope saw Halley’s Comet. The allure of the night sky will always be with us. There is never going to be a dearth of people who have a sense of curiosity and wonder about the universe and will follow through on it. The question is whether society will value that, and whether there will be a society, after all….
For me, what is a little ironic about people who want to establish colonies on the moon or on Mars is that we have this beautiful planet and we can still save it. We can take stewardship and do something about climate change. It’s not yet time to give up on this planet and what we have here. Personally speaking, though, I don’t like the world very much. I don’t like the inequities, I don’t like the strife, don’t like wars. For me, working in cosmology is a form of escape. It is definitely a form of escape. Actually, it’s a meditation and a form of escape.”

And women are the weaker sex in everything…uh huh.

Science is the most egalitarian, diverse and democratic undertaking we humans have ever cooked up. Its the best. And Dr. Natarajan’s work exemplifies this and is at the cutting edge of our knowledge of how the world works around us. Arguing over 2-3,000 year-old primitive speculations of how the world works, or human nature or how people should behave from the scriptures of some religion is so beyond ludicrous in light of what we know today. We have come so far and women are as much a part of it today as at any time in history.
These are the kinds of things, all humans, both genders, of any nationality and all ethnicities can do when we’re not doing religion.