Michael Shermer, Psychologist, Historian of Science and founder of Skeptic magazine.
“All of us are Children of the Enlightenment.”
A great line, which Shermer uses often, to describe the huge changes in our societal thinking since the 1600’s, when everyone’s thinking was suffused with superstition, religious perspectives of doom, gloom, and especially god’s imminent wrath. A wholly unscientific perspective that is oblivious to the individual human rights that most (but not all) of us in the modern world take for granted.
In the 21st century, 500 years hence, we are beneficiaries of Enlightenment thinking although I might qualify that with; “at least in the West, or within scientifically advanced liberal democracies East or West.”

(That’s a subject for a whole other post, mostly centering on Islam, and coming next).

Shermer’s talk, altho entitled “Astronomy and Human History” is a far-ranging tour de force of skepticism, general science, and moral advancement, about which Shermer makes a strong case through numerous examples are intimately entwined.
In discussing various specific astronomy topics, such as the canals on Mars, Shermer is able to broaden the discussion to include general skepticism and all manner of science. For example, the moderator asks “Why did people at one time see canals on Mars, when now one sees faces?”, or the fact that Galileo assumed he saw not rings around Saturn, but two large objects rotating around the planet.
Shermer explains that both ambiguous data, and a lack of theory, are implicated in each case: canals or faces seen on Mars, or Galileo claiming some sort of object was on each side of Saturn and not rings. Data and theory drive what one claims to see.

The poor resolution of early telescopes, and the idea that there could be structures on Mars led to the interpretation of canals. With better resolution, no-one ever saw canals. Those linear appearances were but an artifact of early telescopes. Similarly, with Galileo’s primitive telescope, which could resolve Jupiter’s moon’s, this same instrument could not resolve the rings of Saturn. Saturn, being twice as far away as Jupiter, could not be clearly seen, which left the impression of out of focus blobs on either side.
Additionally, and just as important, there was no theory of rings, no knowledge that such things exist, so one couldn’t assume “Oh those must be out of focus rings…”
We wouldn’t know that until much later. Theory is as important to interpretation of data as is the data itself. 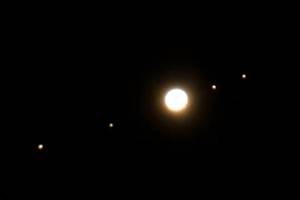 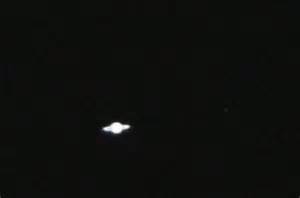 Humans of course, are wired to see faces and our perception will often assemble a face-like appearance out of ambiguous visual input. Better resolution, a different angle, or brighter lighting and the face in the bathroom mirror, (when you played “Bloody Mary” as a kid), or the face on Mars, disappear.
When the discussion turns to UFO’s, Shermer explains that he and the UFO’logists both agree that 95% of alleged UFO sightings have prosaic explanations of being clouds, aircraft, Venus, hoaxes, etc. The UFO believers however, steadfastly cling to those unexplained 5% of sightings that they surely could be alien spacecraft. Humans like to hang on to explanations of unseen, mysterious agents; gods or aliens, take your pick.

The discussion continues, often beginning with a topic in astronomy, which then leads into such diverse and interesting topics as factory farming, sea-steading, climate change, (Shermer was once a denialist, then he read the data and changed his mind), creationism, religion, and even morality. It is an informative and engaging talk, do give it a look and a listen.

For an expansion of his comments on science and the advance of morality check out his provocative book: 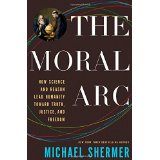 Shermer’s Moral Arc is an excellently researched tome, demonstrating that it has been science and secular values that have advanced our morality, not religion.
Again, for Shermer, we are all “Children of the Enlightenment.” Even the modern-day Xians, who believe not in witches and gods wrath anymore, but in the same secular humanist values that non-believers promote over religious belief: equality, human rights, meaningful work, family, and friends. Even spiritual inquiry has been secularized. It no longer exclusive to faith in a religion, as religion is but one (and rather primitive) manifestation of the human search for transcendence.

In a 2015 edge.org article The Democritization of Science Shermer explains why much of the thinking of all humanity has changed:
“The biggest news story over the past quarter century—that will continue to underlie all the currents, gyres and eddies of individual sciences going forward—is the democratization of scientific knowledge. The first wave of knowledge diffusion happened centuries ago with the printing press and mass-produced books. The second wave took off after the Second World War with the spread of colleges and universities…This democratization of science changes everything because it means we have unleashed billions of minds to solve problems and create solutions.”

When a good portion of the world’s population is educated, beyond primitive religious superstitions and restrictions, we see the outbreak of peace, democracy, an emphasis on human rights and the expansion of real knowledge. As religion wanes, humanism and knowledge flourish. He’s right. We are all “Children of the Enlightenment” and we can spread that to the corners of the world where religion still stifles human rights and education at medieval levels of repression.
More on that later.
end religion now.