Bill Nye on evolution, DNA, science investigation, volcanoes, extraordinary claims, precision measurement, lunar eclipses…you name it.
I NEVER saw an episode of Bill Nye the Science Guy when it aired on TV, 1993-1998. My first set of kids were in their late teens by then and my next set of kids weren’t born yet. My stepkids prolly saw the Science Guy in grade school science class like a bazillion other kids, but they weren’t science geeks at home so I missed Bill Nye the fist time.
This clip above was my first exposure to the Science Guy series, and its AWSUM! Well-produced, well acted, and his cornball humor makes it entertaining for both kids and adults, but most importantly, the presentations are well written. His scripted spiel isn’t just thrown together. Bill connects so many different aspects of science in his episodes and makes it accessible to not just grade-schoolers, but adults. And its not just exploding science demo entertainment. A lot of in-depth scientific concepts get clearly explained as he ambles thru the sets. Now I know why all my students and friends in their late teens, 20’s and early 30’s tell me that their 5th grade science teacher had them watch Bill Nye episodes in all their science classes. 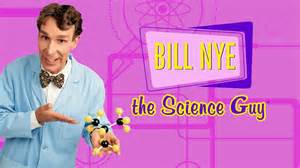 (I just noticed that detail of the episodes of Science Guy while editing this draft a few days on. He always keeps moving, “moving thru the sets” all choreographed, well-rehearsed. The movement keeps you interested and its like you are going somewhere. Nice touch.)

When I get to be Komissar of education, not only is every hi-schooler going to watch every episode of Bill Nye, but all RELIGIOUS adults will be paid, yes paid for their time, to watch all of Bill Nye, especially the Baptists. (Along with a whole course on Sex and Gender). I’d pay them as adults, its not their fault they were hosed as children.

I had only heard of Bill in 2014 when he was scheduled to debate Ken Ham in Kentucky. I was teaching at a small State University in Kentucky at the time, and he added a talk at our school with very short notice to round out the trip. At the time I was unimpressed:
“Oh Yeah, the science geek with the bow tie, didn’t he used to have a TV show?”
My students…ALL of them, however, went nuts. “Holy shit, we got Bill Nye!!” “Bill Nye is gonna speak here, fuck yeah!” “The Science Guy is coming to our school!”
Not just the sciencey types, but musicians, English majors, the flunkies, everybody. It was like Mick Jagger was coming to town, serious. This was the first inkling I had of Nye’s significant celebrity. I thought to myself:
“This guy is a fucking rockstar.” 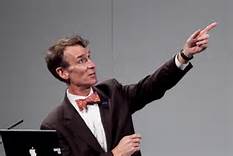 When he showed up to speak in our arena, with about 5,000 adoring fans in attendance, I realized:
“Hell this guy IS a damn rockstar, WTF?”
One buddy of mine was just ecstatic to wear his own nerdy suit coat and bowtie in honor of seeing Bill live and in the flesh. Reactions like this were impressive, to say the least.
I have to admit that in the weeks prior to hearing him talk I was skeptical of his debating Ken Ham, the notoriously slick, unflappable Creationist. A few off the cuff TV interviews I’d seen of Bill gave me the impression that he wasn’t very smooth or prepared. Looking back on that impression, I suspect Bill was just holding his cards close to his vest and avoided saying much of anything in those interviews before the debate.
He utterly changed my mind watching him live. Yes, he worked the crowd with his cornball humor, which works so well as it is obviously genuine. The man is no stranger to the stage: a seasoned entertainer. He had been in front of the cameras for over 20 years by then and it showed. But more importantly, he delivered a passionate and informative talk full of interesting and enlightening science, again ranging across a dozen topics and tying them all together, just as I recently discovered he did so well in his “Science Guy” episodes, like the ones excerpted in the clip above.

Many in the academic community including acquaintances of mine, were not at all happy Bill was going to take on Ken Ham. He wasn’t a PhD after all, not an evolutionist, not even a biologist. Nye is an engineer with “only” a bachelors degree and some aerospace industry experience, and that’s it. After his TV interviews I wasn’t so sure it was a good idea as well, but after watching him in person, seeing the level of his celebrity and more important his credibility, and his clear, very understandable average-guy delivery, I wasn’t so worried. 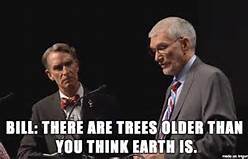 Bill gave science a good hearing at the debate. He presented more easily digestible science to masses of people who normally hear only religious myth and unscientific propaganda exclusively every Sunday. These are folks who take their Xiansanity seriously enough to buy into Ham’s absurd Young Earth Creationism. They got an education that night. Science held its own being in Bill’s very capable hands. And it ended with the main contrast of religion versus science; that evidence is why you do or don’t believe anything. And this seems to be something many young people appear to understand intuitively nowadays, as they are turning away from their religion’s unyielding and absurd ideas such as those on sex and gender, unbelievers, sexual practices, burning in hell, sexual orientation, other religions, etc., if not dropping their religion altogether. 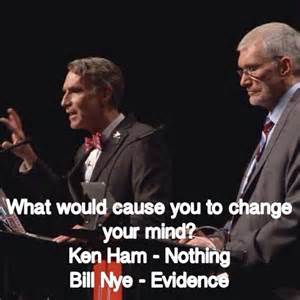 Young people today and even a good portion of us older folks, realize their churches teachings are but old ideas that just don’t fit with the world they live in. Modern knowledge makes religious claims sound like the simplistic, often cruel for no good reason, silly myths and repressive rules from primitive times that they are.
Check out Bill’s top ten moments above, and you will see but one more reason why the youth of today’s 21st century life, surrounded by science and technology, are so less inclined to find religious claims probable. They have been exposed to way too much science, and Bill educated a whole generation for us like never before.
Thnx bro.