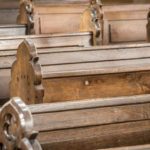 In these troubled times of terrible Trumpism, one can lose perspective that altho the liberal to conservative pendulum swings back and forth every 2 Presidential terms or so, it swings more to the left with every year. The conservatives will stall progress as much as they can, maybe take a step or two back, but wont be able to turn back the hands of time very far. More importantly, the underlying religious thinking that drives Conservatism is itself dying. We hear about the decline of Evangelical Xiansanity members, especially among the young, and know that without immigration, the Catholic Church’s US numbers would look even worse, given they are losing the youth of America even faster than the Baptists and other conservative sects.

This article from CRUX magazine, a Catholic reporting venue for Catholics to see what’s happening with all things Vatican and apostolic, entitled:
Why Catholics are leaving the faith by age 10- and what parents can do about it, just made my day.
It echoes what I hear from my kids, their friends, and my 18 to 20-something college students…and it’s just delicious!
From the article:
‘“Those that are leaving for no religion – and a pretty big component of them saying they are atheist or agnostic – it turns out that when you probe a bit more deeply and you allow them to talk in their own words, that they are bringing up things that are related to science and a need for evidence and a need for proof,” said Doctor Mark Gray, a senior research associate at the Center for Applied Research in the Apostolate at Georgetown University.
“It’s almost a crisis in faith,” he told CNA. “In the whole concept of faith, this is a generation that is struggling with faith in ways that we haven’t seen in previous generations.”’

You bet your sweet bippy it’s a crisis in faith, Doc. Faith is bullshit to the young in our science saturated society. It is belief without evidence. Science shows you need evidence to believe that anything is what it is, you can’t just make up shit up anymore or cite made-up explanations from ancient books written by ignorant cultures from primitive times. That is not evidence. It proves nothing other than early attempts at figuring out how the world works were simplistic and often fantastical then, and just hopelessly wrong now. Evidence. What a concept.
Hear that, Augustine? Dig that, Aquinas? Wonder why we dumped your absurd speculations, Dr. Freud? Become one with this, Chopra! Listen up, all you theologians, myth-makers, woo-meisters and all you Conservative Xiansanity Trumpster science-deniers, there is a sea change coming as the demographics continue to grind away toward a different Zeitgeist as your old ideas die off with you. The youth are on to you. This article does a nice job of not sugar coating the problem, and the reporter, Matt Hadro a contributing author to CRUX, tells it like it is.
And it gets better:
“In exploring why young Catholics were choosing to leave the faith, he noted “an emerging profile” of youth who say they find the faith “incompatible with what they are learning in high school or at the university level.” In a perceived battle between the Catholic Church and science, the Church is losing.”

I like the qualifier “perceived” battle there. The Church, and all who honor religious thought can never admit to the inevitable conflict of the foundations of science and religion which are diametrically opposed. One requires evidence for belief. The other, faith: belief without evidence. Only scripture and religious authority provide the unfounded reasons for belief, and there is no evidence to be found there: just old obviously, fantastical and primitive myths written millennia ago by cultures ignorant of basic science or human rights, and the equally fanciful pronouncements by Church fathers upon said myths. Kids see thru the veil of scripture all to well. There is no evidence for any revelation, for any culture’s claimed writings from their god(s). The crux of the biscuit (it was there I had to take it) for this Crux article is that this is not some mere “trend”:
It’s a trend in the popular culture to see atheism as “smart” and the faith as “a fairy tale,” he said.“And I think the Church needs to come to terms with this as an issue of popular culture,”

It is not merely “fashion” or a mis-perception on the part of the young. It is fairy tale and they know it. They are recognizing clearly that “what they are learning in high school or at the university level” just doesn’t wash with church dogma about how the world works, sexual orientation, sexuality, morality, or at bottom how we come to know what is true and what isn’t. It is the Catholic commentators that have the blinders on. This from one Father Matthew Schneider, an experienced youth minister:
“…the world needs something non-physical as its origin, and that’s how to understand God along with science.”
Today’s youth ask, as I and so many secularists do: “And just how do you know that, Father? What evidence do you have for the claim that there MUST be some spiritual entity at the beginning?” Maybe the universe itself is eternal as modern cosmology suggests and does not need a cause anymore than your non-physical god is claimed not to need. There is no evidence it needs a cause. Maybe that’s just an old idea from an old book. There is evidence for an expanding universe, and a Big Bang, and evolution, but nowhere do we find evidence for Zeus, Allah, Yahweh…just like Santa Claus. This is not a mere trend, but a way of questioning religious authority that has been growing since the Renaissance. Only religion’s 2,000 year domination of our culture gives it any power to convince people it is true. There is no evidence for any religious claim, and the globally connected young with their smartphones pouring out information from Net in the palms of their hands, 24/7 see evidence for all sorts of things…but not religious ideas. Not sure of something? Google it, or ask Siri to google it for u, and in instant you get an answer. Verifiable information. The youth ministers and academics are clueless to what this article is trying to tell them. Good straight reporting, in a religious magazine. Well done.

This even more delusional howler from the good Father, says it all:
“It was the Christian faith that was the birthplace of science,”
Yeah? Tell that to Galileo, and Descartes, and Giordano Bruno or Darwin. Even as devout a Xian as Newton left god out of his equations and only invoked the Deity to keep the heavens in line when he couldn’t make the next leap to figuring out how to calculate the gravitational effects of multiple bodies in space. Xianity had no place in the development of science. It was a rejection of Church authority and a move to freethinking theory and empirical investigation, directly in contrast to Church dogma then as now, both in method and conclusions that made modern science. Galileo was the first prominent, true scientist, relying on his experiments and observations over Church authority. Bruno had his tongue bolted and was burned at the stake before they showed Galileo the instruments of torture both for going against Church teachings. Some birthplace, Father. Science progressed in the freer societies of Northern Europe after Galileo. Descartes was afraid to publish and headed north. Evidence won. Even the highly devout Kepler, did not resort to religious claims but used the voluminous astronomical observations of Tycho Brahe to determine the laws of planetary motion. Evidence, not Church writings showed Kepler how the heavens go. Evidence has become the reason to believe things, not proclamations from on old book or an old male wearing special clothing.

The kids see that. Every day. For one very pertinent example, Catholicism says gays are an abomination and go against “natural law” and gays will burn in hell for practicing an immoral lifestyle. Science on the other hand, says variance in sexual orientation is natural in hundreds of species including humans. Homosexuality is not a lifestyle, but a biological predisposition engendered by hormonal exposure in the womb. That’s the evidence, along with what they see with their own two eyes, and their personal experiences with gay and lesbian friends. They have scientific and personal evidence that their friends are normal, not an abomination, their orientation was not chosen and they certainly do not deserve to suffer in this life or some made-up afterlife. They realize the Church’s stance is drawn from purely old ideas from a primitive culture from a barbaric time in human history. It is not scientific, and it is not true. And there is no evidence of some natural law or an afterlife of any kind, and certainly not some medieval concept of an eternal fiery place.
End of story.

The formerly Evangelical blogger and author and now liberal Xian, Rachel Held Evans said her generation’s bullshit detectors work in high gear. Her own worked too well to remain: “I eventually left evangelicalism when it became clear that the fight was wearing me down, with little promise of change, especially as it concerned my LGBT friends and neighbors.” This article in CRUX confirms this same conundrum of evidence versus dogma is the issue with Catholic kids as well as Evangelicals. And that’s a problem for the faithful, for all faiths.

Religion is just an old bad habit of telling our kids our cultural myths are somehow true. Information kills religion precisely because religions are repositories of old ideas from primitive times and are thereby mostly bad ideas. Uninformed, simple, often ludicrous ideas. They had precious little evidence then, of how the world really works, and there is no evidence at all, for any scripture having been revealed to the authors by somebody’s god. The kids are catching on to that. Everything else has evidence for it, but not myths, not religions. One of my kid’s summed it up thusly, when I asked why so many of her generation don’t believe: “Jesus is just like Santa Claus,” she said. There’s no evidence for either one of them. My 7 yr old granddaughter, like any typical first grader, has caught on to the Santa Claus story. It was fun for her and her parents while it lasted, a harmless tale, that in all actuality is one of the first, and very positive opportunities for children to think for themselves, in allowing kids to figure things out on their own when they catch on, and we fess up:
She clearly observed when they took her little sisters to see Santa: “Hey that’s not Santa, that’s my gym teacher!”
No one continues the Santa myth, claiming fervently that a child must still believe: and believe under penalty of family and community pressure and threat of eternal damnation. Would we be so honest about Jesus, and gays, and the afterlife, and the Trinity, and women’s inferiority. Jesus is, just like Santa Claus, in there being no evidence for either one. They are both merely old myths. And that is the issue.
I’ll give the last word to the academic quoted in the article, Doctor Mark Grey, a researcher in religion at Georgetown University. He can’t hear what the young are telling him, what they tacitly understand even if they haven’t thought it through.
‘There is “no real conflict” between faith and science, Gray said.’
Got any evidence for that, Doc?