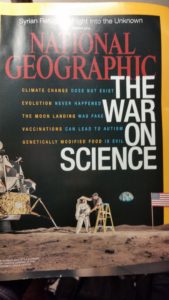 Just where does science denial come from?
You guessed it: Religion. Name me one secular organization that denies climate change. Name me one secular organization that upholds old, pre-scientific, ideas about sex or sexual orientation, denies evolution or upholds ancient ideas of women somehow being inferior. All the unscientific attitudes we face from around the entire world, or daily now in American politics with Trump and his ultra-conservative administration, derive ultimately from one religion or another; from religious thought itself.
Even the absurd Flat Earth myth resurgence has been largely the result of religious motivation. 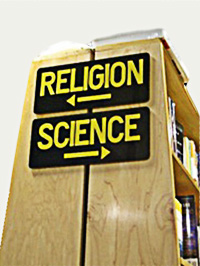 All religions, all religious thought ensconces the key idea that somehow 2-3000 year-old writings from primitive, backward, and generally barbaric times of human existence, having emerged from the particular culture of any given religion, all somehow contain special knowledge, ancient wisdom, eternal truths handed down from the god(s), revealed to their prophets and interpreted and expanded by the theological ruminations of their wise men. Old guys in robes with old books have special access to knowledge the rest of us don’t. That’s the scam, that’s the lie all religions rely on. These books are sacred. They contain truths above any other knowledge: modern, better, scientific, reliable, evidence based, life-saving…all that doesn’t matter. Religious scripture trumps all real-world findings.
(It was there, I HAD to take it).

The science denial predicament in the US, largely promoted by Evangelical Xiansanity, is clearly explained in The Evangelical Roots of our Post-Truth Society.
My blog hero Rachel Held Evans is quoted clearly, early on in the article:

“THE arrival of the “post-truth” political climate came as a shock to many Americans. But to the Christian writer Rachel Held Evans, charges of “fake news” are nothing new. “The deep distrust of the media, of scientific consensus — those were prevalent narratives growing up,” she told me…“It was presented as a cohesive worldview that you could maintain if you studied the Bible,” she told me. “Part of that was that climate change isn’t real, that evolution is a myth made up by scientists who hate God, and capitalism is God’s ideal for society.”

When you are taught as a child and immersed in a culture that maintains that fiction it is difficult to dare leave, to let go. Once you think you have eternal truth, emboldened in the un-assailable Bible-based “Christian worldview” then everything you get exposed to must conform. If it doesn’t, its “fake news”, just more propaganda from the liberal media.
From the article’s author Molly Worthen:

“Conservative evangelicals are not the only ones who think that an authority trusted by the other side is probably lying. But they believe that their own authority — the inerrant Bible — is both supernatural and scientifically sound, and this conviction gives that natural human aversion to unwelcome facts a special power on the right. This religious tradition of fact denial long predates the rise of the culture wars, social media or President Trump…”

Science denial is not new and not confined to the largely Xian US.

One of the most inspiring/depressing stories from an NPR series of articles on 15 year old girls repressive experiences from around the world, largely due to religious ideas infused in their cultures, is of a courageous Hindu young woman in Nepal, who is fighting the insane pre-scientific, primitive, ignorant, patriarchal ideas of her religion and surrounding culture. She, like most Hindu girls must obey “menstrual laws” by eating away from the family, often sleeping outside in a crude “menstrual shed,” and of course staying away from holy temples to avoid defiling them whilst on their periods. (Many Buddhist sects practice the same ridiculous repression). Sound insane in the 21st century? You bet it is.

Young Prakriti, 15, featured in the article Meeting the Malala of Menstruation is trying to overturn centuries, millenia of ignorance, promoted and promulgated by one source: religion. From the article;
“She’s a rebel who uses reason and education to fight back. She knows biology and she knows menstruation doesn’t make her impure or sinful.”

Purely a cultural phenomenon some might say, religion has nothing to do with it. Prakriti again:
“There was a time when my father got sick, and he was hospitalized,” she says. “The doctors couldn’t diagnose him, and then one of the priests, he said, because I had touched him when I was having my period, it could have infuriated the clan gods.”

The article continues:
“So the priest blamed Prakriti for her dad’s illness because she had touched him while she was on period. Where do these ideas come from? Ancient Hindu scriptures say women are highly infectious during their periods, that “all her body is so weak that viruses come out of her mouth and her limbs,” says Mukunda Aryal, who has studied Hindu culture for 40 years. In Hinduism, there was once a king of the gods, who reigned above others. This god, called Indra, committed a horrible sin. And to atone for it, he created menstruation. Now each month, women suffer for this god’s sin. They’re impure, dirty.”

Utter denial of modern knowledge: science. Prakriti knows biology and knows the Hindu priest and her religion are merely full of old, wrong ideas. Religion is bullshit and so many young women and men know it. We cling to old ideas because we’ve been indoctrinated into them, and are immersed in them and the intense social pressures they bring to conform. A Hindu priest, any priest for that matter has no business in a modern hospital. They represent absurd levels of primitive ignorance, trussed up as eternal, unquestionable truth. Prakriti’s dad eventually got better, and it wasn’t because of the priest’s phony authority or absurd ideas given him by his unassailable beliefs in “revealed scripture” 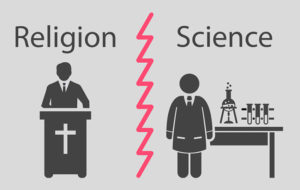 We are at a time where the information available to the world’s youth is exposing religious absurdities at an unprecedented rate. Despite the millenia-old reign of religious thought worldwide and the conservative religious backlash the US and many areas of the rest of the world are experiencing today, religious myth and authority are being questioned, challenged, and attacked all over the globe more than any other time in human history.

Despite being brought up in the stifling Xian cocoon of Evangelical Xiansanity, Rachel Held Evans moved onto a more liberal Epsicopalianism . She believes in science, evolution, climate change, and rejects homophobia, and religious divisiveness now as a more liberal but still very committed Xian. Belief in old myths die hard. They are not intractable. But they must be challenged and discarded. Science denial often not only rejects the reality of our world, it upholds terrible discrimination as well.

Prakriti from Nepal has the last word on the damaging effects of abject denial of modern knowledge from science:
“Because of this belief, because of this ritual, women are not equal to men,” she says. “So this is just a way of discrimination, and discrimination always hurts,” Prakriti says.

One thought on “On Science Denial, Where Does it Come From?”