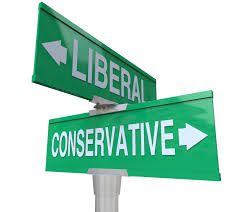 Once again, despite the insane Conservative backlash headed by Trump and his supporters, I am not only struck (and encouraged) by the modifying responses and outright defiant opposition by the ever-expanding liberal public, but especially the push-back from “modern” Conservatives, who galled by Trump in his excesses, seem to be driven further to the left, and faster, than from the normal, inevitable, advance of modern ideas. I use modern in quotes as a adjective for our Conservative friends, as Conservatism stands for a future past, with the status quo vehemently maintained, if not an outright reversal to previous “better” times.
The “past was better” and “change is bad” typically defines Conservatism: “a commitment to traditional values and ideas with opposition to change or innovation” according Oxford Dictionaries. Progress is some silly Leftish utopian dream, unrealistic, and morally reprehensible. But modernity seems to creep along, slowly in less than free societies and inexorably, and relatively quickly, although not always obviously, in democratic ones.

I’ve written on this un-yeilding but often un-noticed phenomenon of social progress numerous times before in this blog (If you search by “conservatives” you’ll get 27 articles here at wearedone.org). It seems to us progressive types that we are always fighting an uphill battle against those who want to turn back the hands of time, to what in their minds was a somehow better bygone era, (which always had less freedom for many and a lack of enlightened thinking). Progressives often overlook the reality that with constant effort, aided by the mountain of new information societies assimilate every decade, liberalism always wins, eventually. Well, Trumpism is having an accelerating effect on the more backwards yearning among us it seems, pushing the more thoughtful Conservatives leftwards at a faster pace than the inevitable march of information typically does.

I gleaned this insight unexpectedly thru an article in the February 22 New York Review of Books entitled “The Worst of the Worst” reviewing a few of the recent books on the Trump fiasco and the Conservative response to his numerous excesses.
It begins with a review of the gossip columnist Michael Wolff’s White House tell-all “Fire and Fury: Inside the Trump White House”. I have not read it myself and don’t intend to. The intrigues and cluelessness of any given day in our White House is just not of interest to me. “Fire and Fury” may portray a reasonably accurate picture of the suspected dysfucntion if not outright chaos going on in our highest level of executive government, thanks to the perennially incompetent Trump, who hasn’t been able to run much of anything successfully over the years, given his lack of interest in actually knowing anything about any business venture and his mercurial management “style”. If you know anything of Trump’s 40 years of real estate cons, self-aggrandizing promotion, continual outright lying, and multiple business and real estate failures, he would be the last guy you’d want to work for. Without his father’s 100’s of millions to fall back on; to cover his losses, fund his perpetual and gargantuan legal fees, his habitual over-borrowing, over-spending, and to payout on the dozens, maybe hundreds of sealed legal settlements from a good number of the over 4,000 lawsuits he has been a party to, and saved in recent decade by the significant, possibly lifesaving infusion of cash orchestrated by the Russians, we would have never heard of the 2-bit conman named Trump.

I have read 4 other books on Trump thus far: “Trump Revealed” (on his rather nefarious 40 year real estate career), “Collusion” by Luke Harding (on the almost countless, and blatantly shady Russian connections to his business dealings, his campaign, and his presidency), Alan Lichtman’s excellent and prescient “The Case for Impeachment”(which puts forth a reasonable and probable case for eventual if not immanent impeachment) and lastly David Cay Johnston’s “The Making of Trump.” Johnston’s followup “It’s Worse than you Think” is next up.

The NYRB review article penned by Michael Tomasky, only covers Fire and Fury and the conservative writer David Frum’s “Trumpocracy” but a number of Conservative commentators along with Frum are discussed as well. Their left-shift in reaction to Trump chronicled by Tomasky is enlightening and heartening to say the least.
Frum, along with fellow Republican-supporting Conservatives: Bill Kristol, Max Boot, and Jennifer Rubin all vehemently oppose Trump in his racism, incoherent (and weak) foreign policy (especially with regards Russia), and his celebration of white, male, rich, privilege.
Max Boot writes that straight white males still run the show and discriminate, harass,and even do violence to women and people of color…people like Boot, himself…this coming from a staunch conservative, not some liberal rights advocate or black feminist, but a white male of the establishment.

Tomasky observes of Boot’s clear-headed and compassionate admission: “It’s hard to imagine these folks becoming liberals, but it’s also pretty difficult to picture someone staying a conservative after experiencing an epiphany like that.”

Tomasky insists these folks still consider themselves tried and true Conservatives, yet also quotes David Frum in wanting:
“…a conservatism that can not only win elections, but also govern responsibly, a conservatism that is culturally modern, economically inclusive, and environmentally responsible.”

I’ve heard a great deal of Frum’s commentary as of late (thanks to being turned on to him by one of my more politically astute students!) and he certainly is a clear-headed intellectual of the right, but it amazing to hear him espouse “cultural modernity” and “inclusiveness” be it economic or otherwise. That’s the language and the perspectives of the left creeping in. Trump’s excesses may well transparently expose the dangers and fallacies of the conservative mindset, and in doing so move these staunch conservatives into the modern era of ever more humanistic values with greater speed. In addition, these more thoughtful Conservatives, are not at all buffaloed by Trumps “embracing of the lie” as a daily strategy as well. They are as appalled and opposed to it as any liberal, any moderate, any rational citizen raised to be honest and truthful in their dealings with other humans.

The one good which may come out of the Trump debacle, is that many US citizens will realize democracy must be worked for and protected. A scoundrel and wanna-be dictator like Trump and his appallingly subservient enablers throughout the once high minded Republican party, must have their con and conspiracy theories challenged at every step. So many bullshit claims, once only the resort of the alt-right media (Breitbart, Infowars and now just as outlandishly conspiratorial and factless: Fox News), having been propagated by Trump and and his minions, have been debunked already. Fact-checking the conman in the White House has become a national past-time. Whatever preposterous and out-right lying claims they and Trump might make, we cannot give up the constant rebuttal and rejection.

From the Obama birther nonsense, the Obama wiretapping claim, the tapes Trump feigned he might have of his conversations with Comey, his continual denial of any Russian meddling in the 2016 election (calling it a hoax done by a fat guy in his bed somewhere, or being solely Democrat’s whining for having lost an election, or maintaining Putin assured him he would never meddle in the US elections), the letter drafted of the meeting with the Russians in Trump Tower being only about adoptions, that the US murder rate was at a 17 year high, that he would be too busy to play golf…to his absurd campaign mantra to make Mexico pay for a wall, Trump has astounded many of those on the right, as well as the left. Frum and the other Conservatives reject this ridiculous, conman’s bluff and bluster as much as most of America does. Even his supporters when pressed go blank when trying to defend his patent absurdities. It is so heartening to watch these prominent conservative commentators call him out on his lies and his smug championing of racial, gender and economic privilege.

More importantly, they sound more like liberals every day.