Dallas sportscaster Dale Hansen supporting the kids from Parkland pushing for gun control.
Its an excellent commentary, 4 minutes, do watch it.

It is rather refreshing to see another old white guy like me decrying the fact that prayers for shooting victims and the survivors are next to fucking useless. It may give the Republicans something to say each time people get shot up agin’ here in ‘Murica, and make a few Xian types feel good, but beyond that Dale’s right: “like that works so well.”
Gotta admit, tho I don’t remember how I happened upon Mr. Hansen’s excellent and smoothly sarcastic commentary, I was blown away just by the sight of an old white guy, in fucking Texas no less, going 100% against the NRA/Republican stance on guns in full support of those uppity damn kids from Florida daring to say enough is enough. And he’s a sportscaster to boot, broadcasting from the heart of where preachers proclaim “god gave us this great game of football”… and the NRA is entrenched in the culture as much as anywhere in the US.

He goes on to cite some chilling facts that the Stoneman Douglas high school shooting in Parkland back in February was already the 18th hi-school shooting for the year of 2018, the US having experienced well over 200 in the last five years… and once again “there’s just nothing we can do” (except watch the Repubs and Xians pray again).
He interestingly points out its almost always a white kid doing the shooting (a white male, mostly, not all, young: the Las Vegas shooter as one exception ).

This is not the first time evidently Dale has spoken out on stopping the gun violence. He was rewarded for a previous comment on our out of control gun situation in the US with a charming email “from another responsible gun owner” who informed Dale that he was saving his last bullet to put right between Dale’s eyes…
Yup, he’s in Texas. What’s really frightening is him being in Texas may not have mattered all that much in today’s bad-ass attitude’Murica nowadays. One might get such a response from anywhere in the country.

Dale notes it was prolly a white guy who sent him the death threat. Wanna bet that white, guy, was also religious?
Kinda makes me think of the Nuge’ 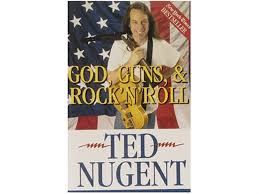 I can almost guarantee that like Ted, Dale’s hate-mailer wasn’t no “Unbelieving Scum” secular humanist like me. Non-believers tend to rely on reason and tolerance to guide their daily behavior (instead that questionable “Good Book” that they love so much in Texas) and wouldn’t threaten violence on anyone just for holding different ideas. That sorta “tough talk” (read bullshit) and hard-ass ‘tude: threatening another human in anger just ‘cuz of their ideas, comes right outa the arrogance inherent in religious thinking. It is the exact antipathy of humanism. I liked Ted’s rockn’roll and he’s one hell of a guitar player and showman (if you like macho bombast), but he is one mouthy, right wing, self-proclaimed, red, white, and blue Republican to be sure. I found it interesting that he, like his newly ultra-Republican hero in the White House, managed to avoid the draft as well. No sissy bone spur-doctors excuse for Ted tho, he took enough drugs to shit his pants and get rejected like a real man. Ain’t it interesting that the guys that talk tough are rarely the ones who have actually experienced combat?

For another excellent take on the youth movement and Gun Control, check out Lewis Black: “The Kids are Marching”

Lewis points out the “kids” made gay marriage a done deal in but a few years. Now observing the “kids marching” Lewis notes:
“You’ve awakened a beast, you fuckers”

Black harkens back to the marching, the protests, against Vietnam and how it was also very much a youth movement, as was the Civil Rights movement before it. The marchers in the street, the student takeovers of university buildings, like the sit-ins at lunch counters across the South before them, was largely done by “kids.” 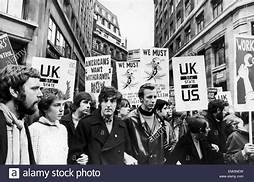 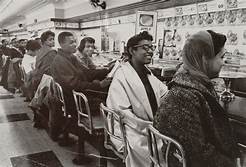 And its not the first time in US history that younger people have had a profound impact. 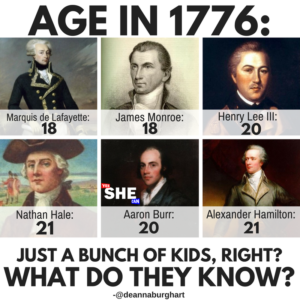 When I first saw this meme, it made me research other Founding Fathers not included:
Jefferson-33, Madison- 25 and John Adams an “old” man of 41.
Only 13 years later in 1789 when the Constitution was ratified, these kids were still mostly in their 30’s and 40’s’. Think about that. The age of our Representatives and Senators and other Washington D.C. officials at all levels has been creeping up for decades.
Now, we have all these 60-70 year-olds: Trump, Sessions, Kelly, McMaster, Tillerson, Graham, Grassley, McConnell, Feinstein, McCain (81), Schumer,…etc., etc., running the show.
The average age in Congress is 57, in the Senate: 61!
77% percent of the members of Congress are over 50! No wonder we wallow in slow, conservative, backwards thinking, and ponderous legislative gridlock.

Madison, Jefferson, Adams, Hamilton, Monroe, all “kids” compared to today’s legislators and officials. Even George Washington was only 44 in 1776. Ben Franklin was the old man of 70 then, dying the year after the Constitution was ratified. And if you know anything of Franklin’s reputation, he was a rather young-thinking progressive person his entire life.
We used to have our government leaders working in their prime, moving forward, and fast!

So the young taking the bull by the horns is nothing new. We’ve just slowly slipped over the years into a government mostly comprised of old geezers (mostly old male white guys).
It is definitely time for a major youth movement across the board.

One thought on “It’s always been the Young: 1776, Civil Rights, Gay Marriage, and now Gun Control.”