With running voter registration drives, and teaching 7 classes and playing a lot of guitar, Ive been very gratifyingly busy as hell and so the Unbelieving Scum videocast will kick off in 2019, not next month as planned. Remodeling the studio is scheduled over winter break, aint gonna happen now before finals that’s for sure!
Its allgood, tho. 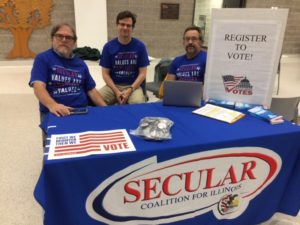 Getting the young to vote is the most important task, not just for the midterms but for the next decade. Instead of waiting for the slowly advancing demographics of women and minorities to creep up on the old Conservative, largely old Xian voting block that dominates our elections, if the young and women and Hispanics and blacks vote just incrementally more than they do now, we could end the hegemony of old white male Xian lawyers that dominate our legislature and executive branch of government.
When we get more females, diversity and more scientists and business people and educators and medical folks in our legislature instead of white males trained in argumentation and delighting in obstruction as their preferred form of “winning” then we will get moving forward thru intelligent discussion and compromise and working together, reaching across the aisle again, as was common in the not too distant past.
There is so much good stuff going on in science and social advancement world-wide, under our daily cycle of divisive, truly childish name-calling politics: the strategy of the Repub party of Trump, that is not reported and I intend to cover that kinda news as much as secular topics.
Coming soon enuf.