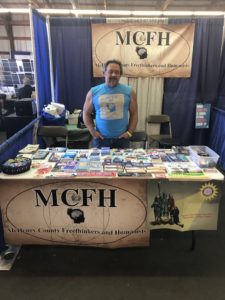 My new secular group, the McHenry County Freethinkers and Humanists, but 9 months old now, had a booth at the McHenry County Fair 2 weeks ago in my hometown of Woodstock, Il. We were there 6 days, 10-9 most days, handing out literature from the FFRF (Freedom from Religion Foundation) (their Metro Chicago Chapter co-sponsored the booth), the AHA (American Humanists Association), the American Atheists, the Secular Coalition for America and a few other national secular organizations. A lot of their literature supports LGBTQI equality and rights and the rainbow flyers and buttons were big favorites. It was our first community outreach as a local secular humanist group, and so many that came by expressed gratitude to see secular values represented versus the traditional religious groups that are always a presence at the fair. McHenry County, Il has been a long time, nearly all-white farming-industrial area, with no functional Democratic party, liberal or diverse presence for decades…but all that has changed in but the last 10-20 years, and dramatically so. 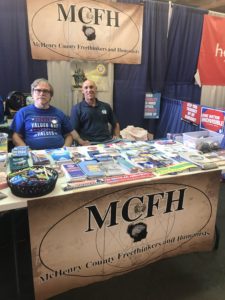 Here’s Tom and Bob from the FFRFMCC group taking a shift, spreading the word about secularism and especially the importance of separation of church and state.

We had plenty of like-minded liberal-progressive non-religious folks stop by and tell us how cool it was to see a secular group in McHenry County providing some “equal time” representation to the Pro-Lifers, Pregnancy “counselors”, Catholic support group, The Gideons (in the next building) and the very prominent and long-established county Republican Party. It is amazing how split along party lines, non-belief, liberal thinking and progressive ideas are, nearly exclusive to Democrats and Independents, with the Republican Party now being so ensconced in religiousness and conservatism. I’ve met one Republican atheist in 3 years of attending secular meetings all over the Illinois-Wisconsin-Indiana-Iowa area. There is usually a local Pro-Choice group at the Fair every year, so they were damn glad to have us there along with a growing and becoming rather formidable McHenry County Democratic party. More on that later.
So the secular values of:
FREEDOM, EQUALITY, INCLUSION, and KNOWLEDGE were well-represented here in farm country on the edge of the Chicago Metro suburban sprawl. 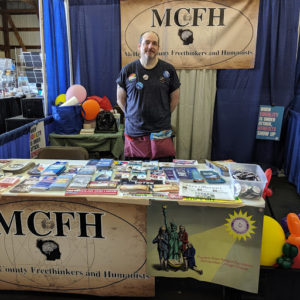 Here’s Tim from our group working the booth, taking one of his many shifts, engaging people in calm, straight forward religious discussion.

Woodstock and the surrounding communities were certainly not just farm country, but despite being developed economically, having good schools, factories, roads, and shopping, McHenry County was definitely dominated from the 50’s thru the 90’s at least by a largely unopposed Republican Party. There was no Democratic candidate for most elected offices for many years. That was the norm.
Man, have times changed. 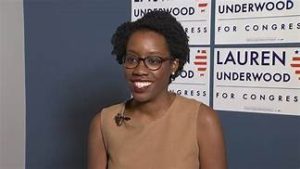 This past 2018 election, indicative of the nationwide Democratic “Blue Wave”, McHenry County elected a Democrat to the House of Representatives as part of the 14th Congressional District, with 52.5% going for the…wait for it… African-American FEMALE Democrat. If anyone had suggested anytime, even up to the recent past election or two that a Democrat might win this County, much less an African American female, they would have been laughed off the planet! Not no more. It happened.

One of the folks from the Democrats of McHenry County stopped by to say hello and chat late Sunday as the Fair was winding down. We both agreed it was great for both of our organizations to be so well represented here in such a traditional, conservative bastion of Republican dominance, and how excited we were to see that trend changing before our very eyes with the election of Lauren Underwood, the growth and strength of local Democratic movement and that here’s a homegrown secular group making its first appearance as well. But she dropped some data on me that I had to hear twice to process. If true, like wow, times they are a changin’…

She said they had just had a presentation from a political analyst who evidently drew his numbers from the county voter registration rolls, and he claimed that McHenry County is ALREADY a mostly Democratic County now. Let that sink in a bit. The numbers were similar to Lauren Underwood’s voter turnout, and evidently around 52-53% of the County now are Democratic voters. One big remaining difference was that somewhere around 70% of the Republicans vote, and only 30-40% of the Democrats have participated in recent elections.

HUH? It flipped already? No way!

But then that does explain Underwood winning at all in this district and it jibes with what I see every day. I’m an instructor at the local community college: McHenry County College (MCC), and my classrooms are incredibly diverse compared to when I grew up and went to school here in the 60’s and 70’s: All thru grade school, hi-school, and yes community college. I’m an MCC alumnus: A.S. 1974. What a local yokel I am, born in Harvard, raised in Woodstock, reside now in Crystal Lake…and except for a 1 year stint in Tampa, Florida and “commuting” to teach in Kentucky for 5 years (home every coupla weeks and summers)… I just can’t seem to find my way outa here.
My classrooms now are prolly around 40% Hispanic, with African Americans, Asians, Indians, and Middle Easterners all represented as well…AND the college population is now 60% female. The County was lily white when I was a kid, everyone went to church and everybody’s Dad was a Republican. My Dad did a short stint when I was in grade school as a precinct committeeman. So it goes.

I realize my sub-sample of the overall population is mostly GenZ and Millenials (18-35) and college enrolees, but the demographics are indicative of the non-college population as well through age 40-50. Older folks, us Boomers, and Silent generation in their 60’s-80’s tend to be mostly white, and conservative, reflecting the lack of diversity of times past. So with all that representation of females and diversity now, and if the County has flipped to majority of Democratic voters as well, it should be no surprise that someone like Underwood was electable in 2018. But still, all of this, just sinking in is like WOW! 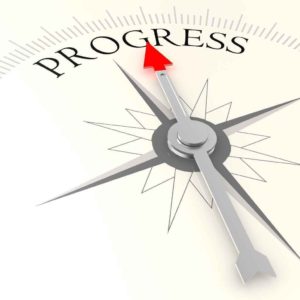 Many of us liberal types, who tend to be secular (non-religious) if not outright non-believers (atheist or agnostic or apatheist) are still waking up to the fact that the demographics have already changed, and the younger Generations of Millennials and Gen Z’ers are rather progressive and non-religious in their thinking whether they identify as such or not. They vote mostly Democratic and are among the most non-religious generations ever with 35-40% of them identifying as “Nones” i.e., “non-religious” or having no religious affiliation.

I’ve noted at the national and local level that we seculars, and the Democrats, (believers or not) tend to be the less-aggressive sort, which is good, but I often think Democrats nationally need to grow some balls and challenge the shit out of the Republican obnoxiousness headed up by the conman in the White House. Wake up folks, the historic drubbing we gave the Repubs in 2018 was not a fluke, and we could double down on it and really kick ass in 2020 if we continue to get the young, females (and males), folks of color out there and vote! Imagine if Democrats in McHenry County turn out at the level of the Repubs, with the majority of registered voters voting…we’d double our numbers. It may be its all too fast to see the forest for the trees yet. I know that is an issue with us secularists. We haven’t figured out we are the largest voting block, and “religious” group in the US. The Nones are 25% of the overall population now, bigger as a group than any religious denomination, with Catholics at 23%, Evangelicals at 16% or so. So maybe this change is all too fast and both Democrats and secularists need to realize how powerful we have already become, and that the youngest generations are even more skewed to non-religiousness and liberal, progressive ideas. 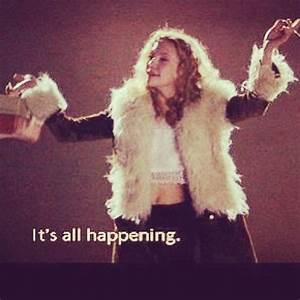 It’s like we keep thinking the demographics are gonna flip in another decade or two with the young being so liberal and progressive and accepting of all ethnicities and sexual and gender orientations….but it is happening already, it is happening now! The Gen Z’ers are even more left leaning than the Millenials, and they are REALLY concerned about climate change and LGBTQ equality, women’s rights…but immigration (migrants, legal and illegal) isn’t even on their radar. Many of them are themselves immigrants, or their parents are, and they all know people of various colors and sexual orientations and practices…none of the Republican, conservative, hot-buttons are even an issue. And they may be non-religious, but not in a secular activist way. Most have not read Dawkins or Hitchens or know what the terms “secular” or “humanism” even stand for, but so many are secular, and most espouse humanist values, putting individual human rights above all else. So many were not brought up in a religious household, surrounded by an unquestioning religious culture like us Baby Boomers were. I’ll be sharing some local survey data of my students this semester, and some of my ideas on how the younger generation’s now being so connected to so much info in so many ways, end up not being as susceptible to conservative and religious ideas. It seems they end up secular and humanist without knowing what that is…more on that in a later post. 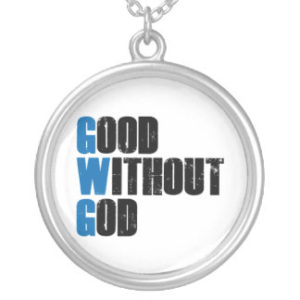 For example, you can be “Good without God” without even thinking about it. This was one of the most popular stickers/buttons we handed out. One kid that came by was going nuts over all of our stickers and buttons, (he looked to be about 8th grade-freshman age), yet he was acting a bit reluctant to take one, so we said: “Go ahead, they’re all free, help yourself” and he replied:

He didn’t say his Dad was a Conservative, or religious, or not into LGBTQ stuff, or a minister or anything, he said “Republican”…and that nowadays covers it all! Prolly 99% of us free-thinking secular humanists are Democrats or Independents (with a few Liberatarians thrown in). Free-thinking and a concern for other’s rights doesn’t seem to line up well with a conservative, political agenda nowadays, and the next couple of generations are already freer in their thinking than we fully realize.
It was a good week at the Fair.