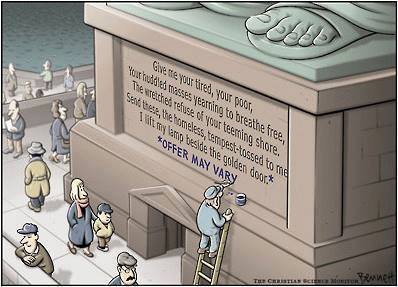 This from the bottom of the Statue of Liberty:
Give me your tired, your poor,
Your huddled masses yearning to breathe free;
The wretched refuse of your teeming shore,
Send these, the homeless,
Tempest-tossed to me
I lift my lamp beside the golden door!

And boy how that attitude has been compromised as parodied in the cartoon.
For a pathetic example, check out this video by Reverend Dennis Terry, Baptist minister from Louisiana, and see what he thinks about folks different from him and what we should do with them.

When did old white Xians from the South, take over this country? Since Reagan and both Bushes with a boost from the liberal Evangelical Carter that paved the way for Religious Right to hijack the Republican party over the last 30 years or so.
Who says it’s HIS country anyway?
Maybe Reverend Terry’s ancestors made it here on the Mayflower, most likely his clan arrived from the British Isles decades, even a century or more later. He was an immigrant too once.

And Baptist’s who didn’t believe quite what the New England Puritans and other sects did about Xianity suffered discrimination even persecution as immigrants who dared differ from the established Xians already here. How quickly he forgets.
Jefferson’s letter to the Danbury Baptists about that persecution;
that they were suffering at the hands of other XIANS!! Reiterated this was a secular country, NOT a Xian nation, despite Rev Terry’s revisionist history claims to the contrary, and in it Jefferson used the words “building a wall of separation between church and state” in referring to the 1st Amendment guaranteeing religious freedom.
Rev. Terry as an American, as a Baptist especially should know this.
This is a prime example of the Arrogance (and smug delusion) that religious thought promotes.
We want old time Enlightenment as ensconced in those words at the bottom of the Lady Liberty, not any more “old time religion.” 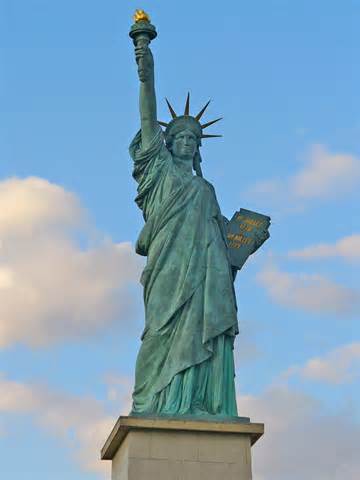