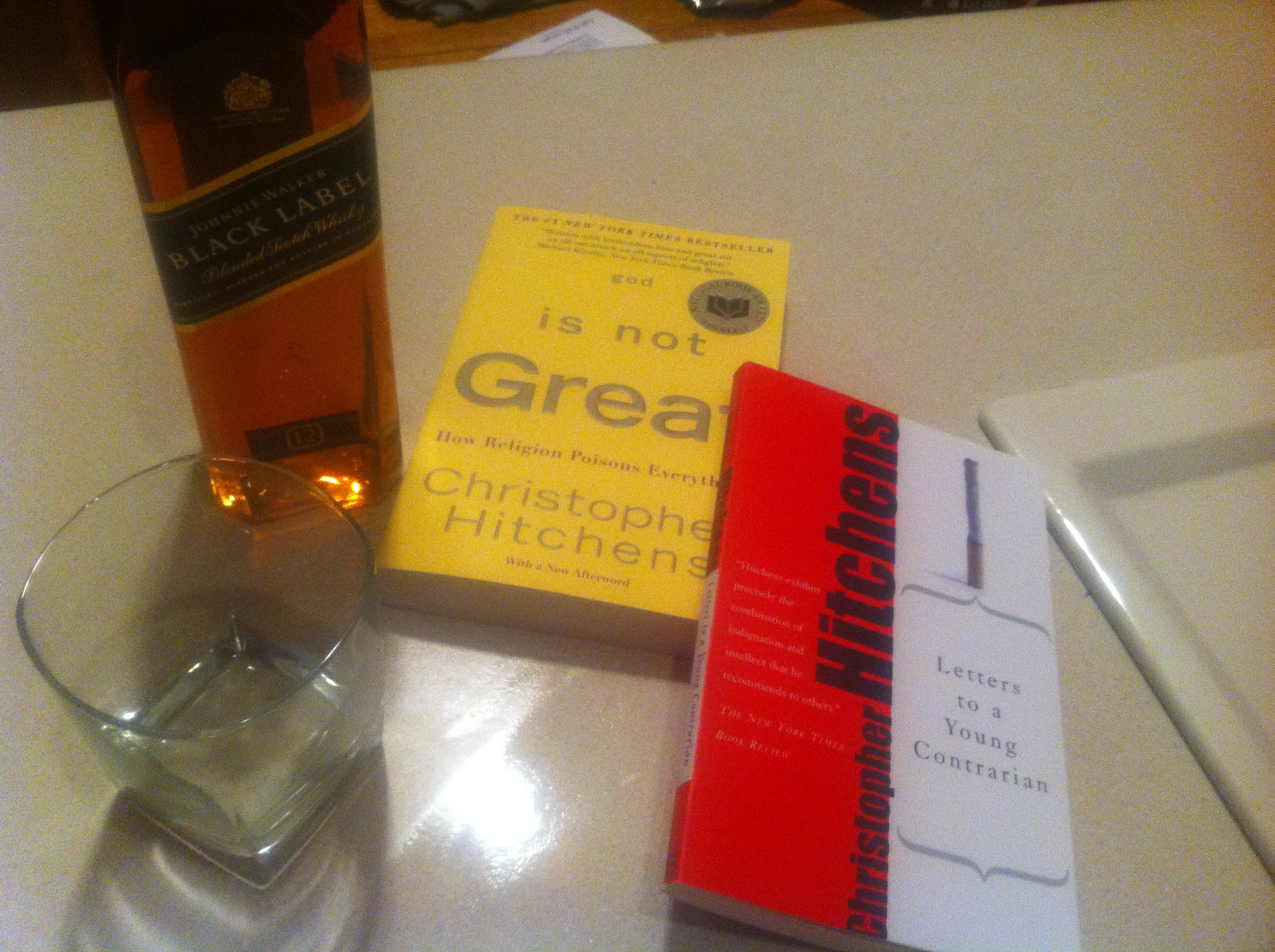 Why did Hitch bother, why do I…or any of us New Enlightenment promoters who blog, editorialize, publish, speak and communicate daily all over the world against the repressions of religion? Well, here’s the incomparable Christopher Hitchens’ take on it. And below an attempt of mine to explain it to a good Xian friend who wondered why as well.

I have two audiences and finding that fine line between emboldening one and not pissing off the other while attempting to enlighten them both may determine how successful a writer I become. I will challenge the religious audience to think of what they have been taught, unquestioned since they were little, in a very different, very critical and often glaring light. There is no time to pull punches. My liberal Xian friends think everything is fine because they live within a faith that is neither demanding nor demeaning of others and can’t understand why all this “religion bashing” is necessary. They wonder what the fuss is all about: Would that every religionist in the world be as considerate of others. But they are not. There is a strong, very vocal and repressive religious minority in this country and incredibly cruel and overwhelmingly repressive religious minorities and majorities in other countries around the world that impose their beliefs and behaviors daily without letup on everyone they can, especially women and gays. Millions of lives are ruined every day at the hands of the religious.
Militant theism is widespread and accepted as a normal component of having religious faith, even in our own country. In this country militant theism may be on the surface less apparent and thankfully less damaging (though not always) than in Islamic countries for example, but it is no less insidious. The USA Today published an article covering the evangelical response to Obama’s coming out in favor of gay marriage. In the accompanying photo was a black Baptist minister waving his Bible, very upset that Obama is obviously going directly against Scripture. The sort of nonsense the good minister sincerely believes needs to be questioned and ridiculed and jettisoned from modern enlightened culture as soon as possible. Why should the rest of the country and the majority of us who are not evangelical Xians, be compelled to live by his religious standards? He is certainly free and welcome to never marry a gay in his church. He is free to be as ignorant and intolerant as he chooses. But the other 85% of us non evangelicals don’t need or want laws based on his or anyone else’s intolerant and ignorant interpretation of scripture.
Liberal Xians of course aren’t like this, or at least not to the same extent. I sat on a panel discussion for the MSU LBGT group a year or so ago with two very kind ministers, definitely members of the liberal Xian camp. Yet there they were, apologizing from the very beginning in their opening remarks about the treatment and perspectives accorded to gays by their respective churches. Gays can’t be ministers, they are second class citizens from the start. Their lifestyle of course, whether one particular church goes along with the absurd evangelical propaganda of “choice” or not, isn’t condoned in the least, the old, “love the poor sinner, hate the sin” sort of hedging. And they dragged out the word “nuanced” to describe the ongoing theological debate over the issue as they tried to explain that their respective churches were certainly hard at work on “the problem” to reconcile modern societal acceptance of varying sexual orientation based on science, with wholly arbitrary selection and interpretation of Bible passages. “We’re working on it, and we’ll get back to you” was the upshot. Isn’t that just special? Well gee, come over to the secular un-religious camp, there is no “gay” problem. You are not a “problem” for us. We know modern science says sexual orientation varies in hundreds of species, mediated by multiple genetic and hormonal prenatal developmental processes. It is as normal as variation in any other physical and behavioral trait. End of story.
As for my second audience, the vast (and may I co-opt and reverse the meaning of an old term) “silent majority” of people who value reason and tolerance and compassion for their fellow humans over religious dogma any day of the week, I attempt to express what they may be thinking. Militant theism has got to go. The arrogance of religious thought has had its run. We need to push it over the cliff as soon as possible. Personal religious freedom should be protected as always in every country but the supposition that you may then impose your beliefs on anyone else including your children has got to go, jettisoned like the bad habit that it is. Keep and enjoy your comforting rituals and sense of community and whatever cosmological speculations you entertain about a particular deity. Just leave everyone else alone. Leave the rest of us alone. We don’t want to live by Baptist attitudes toward sex and gays. We don’t want to live under Catholic attitudes toward birth control and abortion. We don’t want sharia law. We would like every religious person worldwide to be just like the Amish, the Mennonites or the Jains: completely unobtrusive in their beliefs and rituals, wholly respective of every other human’s space and rights on the planet. The Amish may not like zippers, internal combustion engines or electricity but they don’t attempt to legislate against anyone else employing and enjoying them. If only the Baptists, Muslims, and Catholics would keep their conservative, repressive and usually absurd ideas on sex, porn, stem cell research, gay rights, women’s rights, evolution, birth control and abortion to themselves. Folks, like the Amish and Jains, very kindly leave the rest of us alone. If we can get the Baptists, Muslims and Catholics to do the same “what a wonderful world it would be”. Imagine no guilt over sex or birth control. No absurd denials of science. No homophobia, no misogyny. I’ll risk tiptoeing off that fine line now and then for that.