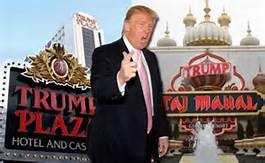 Trump is not successful. At anything. Not business, not investing, not as a human being, not even as a formidable conman. He has paid dearly, in the billions of dollars lost to his grandiose schemes, broken commitments, empty promises, bombastic misdirection by “alternative facts” and his confrontational method of “deal by intimidation”. The nearly 63 million who voted for him need to understand this. This is not a successful businessman who ever developed a product or service, built a company, grew a management team, or bothered to pay attention to the details that make ventures succeed.

Anyone that started with 100-200 million dollars of income, inheritance, loan guarantees, and the management of his father’s truly successful real estate business in the 1970/80’s could be worth in the neighborhood of 10-12 billion today. His bluster about his net worth being near the 10 billion mark, which he refuses to confirm through his tax returns or other disclosures, is in that ballpark. However, Forbes magazine and many others peg him at about 3 billion of net worth, at most, and even that is sketchy, given the extent of his liabilities. By 1990 he almost lost it all by over-leveraging his over-the top real estate activities and putting himself and his father’s previously very solid company billions in debt. His grandiose projects and extravagant, irresponsible business style almost took the whole thing down. The banks stepped in, restructured it for him, and saved his ass from his own incompetence and excess. His father had similarly saved one of his casinos that didn’t meet Trump’s inflated claims for success by infusing 7 million to keep it from going under. This is not a successful operator. He is a buffoon, not a businessman. He is an over-indulgent, combative, rich kid, not a prudent investor, developer, or entrepreneur. He is not successful. He is a big-ego conman who got lucky and inherited millions to feed his need to bully and bluff, whose personality traits have cost him dearly, almost everything at one point.

There is a popular misconception that most inheritances are squandered away, lost by the spoiled children that inherit them. On the contrary, most inherited family wealth worldwide continues on and grows with many family members becoming astute money managers and entrepreneurs or developers in their own right. Trump didn’t. His failures are legendary. He is a success only in his own mind. He refuses to read. Most businessmen study all sorts of things and value learning immensely. If not in general, then at least in their own industries or about business at large. Not Trump. He is already smart in his mind and needs no knowledge or instruction. Look at his utter lack of recent history knowledge in his gaffes over when or if Russia had invaded the Ukraine, or his ludicrous insistence, without a shred of experience, to know better than the entire Intelligence community. The examples are too numerous to mention of his ignorance of pertinent information.

Trump lost 900 million in one year alone. His way of doing business, while effectively conning investors, partners, municipalities, and suppliers up front, into buying into overblown development promises he has no intention of keeping, may appear “successful” at first. The aftermath however, of ventures losing big money and expensive, voluminous litigation, demonstrate that of most of his deals have cost him dearly.

A list of most of his ventures and their not so successful ends is available HERE. This NYT article is well worth the read. One grandiose scheme after another, most of which fail, lose money and wind up in litigation have cost him the billions he might have made with reasonable investing, development and true negotiation skills. He almost lost it all and has lost billions indulging in his personality excesses. He has paid dearly for his supposed prowess in the “Art of the Deal.” It is all hype.

There is one aspect of his regular bombast, that he is just so totally awsum, which I fear he truly does believe. He knows he is just stroking everyone on anything else he makes up. But it seems he does need desperately to believe the part where he cons himself. He still speaks of his disastrous escapades in the hotel and casino business in Atlantic City as “I made a lot of money there.” Yes, he made millions in income, but lost 100’s of millions of his own money and his investors in going bankrupt 4 times on that whole fiasco. Some “success” some “making a lot of money.” This is like claiming you made money when one month in the year you made $1,000 but lost $10,000 over the course of the rest of the year. Not a success by any stretch, except in the Trump mind it seems. Trump has to believe and can’t take it when others don’t believe he is the greatest at, everything. He is smarter than the Intel community, had the biggest inauguration crowd, made a lot of money in casinos, has to have every venture be “the greatest,” what have you. He didn’t really make money by shrewd business deals or besting anyone as he portrays. His 4,000 lawsuits and excessive borrowing have cost him billions over the years. An analysis of how his assets did grow is available HERE. He inherited millions and a position of privilege and power. He nearly blew it all, has squandered it in dozens of different ways and only appears successful because of good fortune and developments and policies beyond his control, which provided him any asset growth that he has benefited from.

As I said, I don’t for a minute think that Trump believes the bullshit he makes up on the fly and doubles down on. He knows he is just out to con you and has admitted his strategy is one of “truthful hyperbole” wherein he doesn’t just exaggerate the features of the used car he is trying to sell you, he makes complete fabrications out of whole cloth and doubles down on them even under oath. That strategy cost him $25 million in recently settling the Trump University lawsuit in which he lied blatantly, and repeatedly, under oath about all his grandiose and all too typical unrealistic promises about the venture. He had to get that out one of the way before he became President, as it would have immediately provided grounds for impeachment if he had been convicted of racketeering.

As many others have pointed out, I do believe his ego has to maintain the lie that he is not merely a success, but a magnificent, and unparalleled success, at everything he has touched, and it is all of his own doing. The reality is quite the opposite. He has blown most of his opportunities, wasted untold millions on frivolous lawsuits, and lost millions more in legal battles where he eventually coughed up for his inveterate lying. His con method is more than a bit expensive. It is his ego that drives this need to put one over on everyone he comes in contact with:

“Over the years I’ve participated in many battles and have really almost come out very, very victorious every single time. I’ve beaten many people and companies, and I’ve won many wars. I have fairly but intelligently earned many billions of dollars, which in a sense was both a scorecard and acknowledgment of my abilities.”

In his mind, he has to have won, even when he has lost his ass. He needs to believe that narrative, and cant handle it when others do not.

Many supporters of Trump, who may be feeling more than a bit guilty at this point, have repeated the vain hope that he would “moderate” himself upon assuming the Presidency. Right. His personality, as exemplified by his all too consistent behavior throughout his adult life, that which we all witnessed during the primaries, and in the days before he took office, and now that he is in power, is exactly how he has conducted himself in all of his grandiose and confrontational deals. This is Trump, the flawed man, the con who would be President. Now, he has the opportunity to do what he likes to do best, which is confront and bullshit everyone with “truthful hyperbole,” attempt to intimidate everyone, make things up, say whatever he wants, as fantastical as it may be, with absolutely no thought of the consequences…more than he ever has before. He is turning up the volume by the day. He is now the biggest kid in the candy store ever. Now he can try to intimidate and bullshit the entire world!! He is just warming up!!

What we never hear from him, and need to hear repeated even more in the media, is how regularly all his bluff and bluster has gone south or not worked at all on the truly savvy business people: His money-losing deals and all the many business people way beyond his league, that of a second rate con (with a lot of money), who were never intimidated, never buffaloed and who didn’t get scammed, or got the best of him. An excellent example is chronicled in the story of the Hong Kong investors who kept the upper hand throughout, tried to deal honestly with the Trumpster, bailed him out as part of a reasonable investment deal only to have him frivolously sue them for a billion dollars…another suit he disastrously lost. Somebody came in and bailed him out, once again, and his fragile ego couldn’t take it.

He will certainly do some damage as President, but I suspect the entire world will catch on as quickly as the US citizenry has, to what a total failure of a human being Donald Trump truly is, and that his psychopathic lying and confrontational egotism do not represent the mindset of the American public or anything the United States stands for. Hopefully, those that did or still support him, will be forced to reconsider or at least step aside as the overwhelming evidence against the “successful businessman” narrative continues to come to light.