I started this blog 90 days ago, on 10/20/14.
Since then I’ve written 73 posts averaging 700 words each.
A new post every day except Sundays and holidays, over 52,000 words, with nearly a quarter of a million typed characters, and just shy of 8,000 views by the hundreds of folks who have accessed the site…

Shazzam is right! I don’t know what else to say. Besides THNX!!!
Why? Why Write? Why Now? I got a full-time job as a teacher/researcher that eats up 50-60 hours and more a week already. Why write a daily blog that consumes another 1-3 hours a day?
Well, so many of us are so incensed over the bullshit that is religious thought…
I use the phrase: “The Arrogance of Religious Thought”™ often and I mean it. 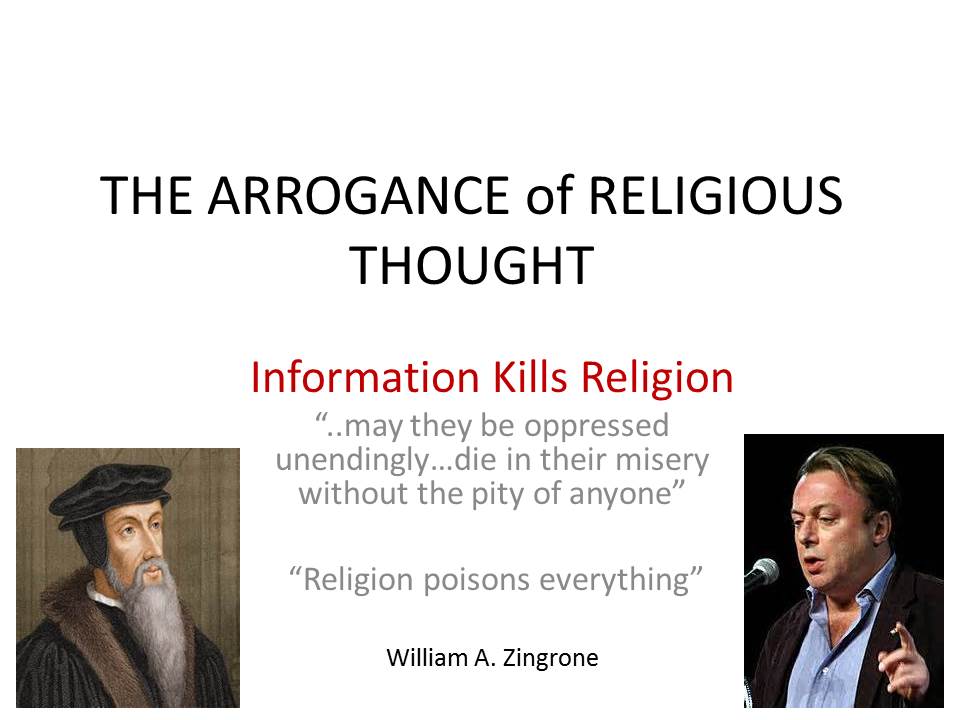 The revered, illustrious, respected, theologian and church leader John Calvin across from Hitch in the slide above, what does he have to say to us through the centuries? “Let the Jews die in their misery without pity…”
All this from one of the most esteemed authorities of the “religion of love.” Whatta guy. WWJD? Jesus was a Jew you clown!
Hitch was right: “religion poisons everything.”

How dare we teach children its “normal” to condemn anyone to some imaginary eternal suffering.
“Oh I don’t judge, but (my) God will!”
Bullshit!
That god is solely in your head.
And he was put there solely by the Arrogance of Religious Thought.
No-one is born hoping others will burn forever in some dastardly conception of unspeakable agony. You have to teach people to think that’s a real good thing, a necessary consequence, a righteous idea, an inescapable reality. You have to con them, convince them while they’re young.
If you wait until they are adults to try to peddle that shit, they will tell you to “go to Hell.”
What a load of horseshit.
You teach your children that nasty crap? You should be ashamed of yourself!
You perpetuate that hatred in the name of some frothy deity so you can claim to have “faith”?
This is but one reason many of us All Over the World are incensed, angry, fed up with it.
It is but one reason why I write.

Obviously I enjoy writing as well. Learning the craft and hopefully improving at the skill of expressing ones’ thoughts in written hand has its own very deep intrinsic reward. We all have the wired-in intrinsic motivation as human animals to get better at something; usually many things. We all want to be better at our jobs, our hobbies, at skills and sports and diversions. So the reward of finding how to put some structure, a turn of phrase, a funny anecdote, an odd twist into an essay while conveying, sometimes hammering home a point is truly “where it’s at” for me. So I get the rush of learning this craft, getting better (hopefully) at something or at least trying.
And I get the greater reward of talking to people, many of them only acquaintances and many, maybe most, strangers. Homo locquasius, Homo communicatus… that’s us.
And when a post is real popular and hits views in the hundreds (average now is pushing 75) and I get comments, FB likes, or reddit comments from folks I do and don’t know… it’s like WOW.

But it is even more important that the questioning of religion is being done at all. Getting more and more like minded people who see the absurdity of religious thought and the pain and utterly needless suffering it causes worldwide to come out, talk about it, and demand more of our culture than to perpetuate the unearned position of dominance religion had had for so long, too long, that’s REALLY “where it’s at.”
We are not Homo religicus by design. That is an ugly historical accident of cults and conquest, dominance through the Dark Ages, and a social respectability that is so ingrained it remains entrenched, but not intractable.
The Renaissance thinkers pulled away, the Enlightenment thinkers dared question it and the New Enlightenment movement rejects it, attacks it and call for its marginalization, if not its end.
It is why I write.
Information Kills Religion.