So much has happened in just one week: initiating this blog, my speaking at KY Freethought (see two posts below), arranging for Jerry Coyne coming to Murray State (see poster at the end of this post) the Facebook arguments with the unbelieving scum at MSU vs. Ken Ham’s Creationist minions (click here to see for yourself) and now finding Jaclyn Glenn on YouTube this morning and how much she represents the next generation of voters…

All that in one week and given that SO MUCH has happened in less than a decade with this exponentially expanding secular movement “The New Enlightenment”… It makes me think like Michael Corleone and his observation of the Cuban rebels in this old Godfather clip – “They Can Win.”

Watch Jaclyn’s rapid fire patter on whats wrong with Republicans. Hilarious! Guaranteed tough to listen to for many who are over 40… and telling too. The young don’t give a shit about what old white guys in America worry obsessively about. It’s all gonna change and HUGE and not that far down the road. Jaclyn doesn’t look or sound much like a Cuban Rebel, but her thinking is as diametrically opposed to that of old white guys be they Republicans, Popes, Rick Warrens or Billy Grahams, the Catholics on the Supreme Court, Jonah Goldberg, Glenn Beck, Rush Limbaugh, Ann Coulter (she’s just an old white guy in a skinny chick suit) as any rebel ever pitted against an oppressive regime:

Like Billy Connolloy said about the Muslim bombers in the clip I posted a week ago on Oct 22nd (scroll down 6 posts) “..what they need is a good shag.” Jaclyn is right there with him on the Republicans! Old violent males of every culture obsessed with phony, repressive, moralizing ideals. The youth want to jettison it all.
The world is changing…and fast. Religious repression and its divisive thinking wont go away in a heartbeat but it will keep being pushed back to the sidelines. And the change is fueled by the free exchange of information. What we know to be true from unfettered observation and experiment on how people really are and how the world really works: SCIENCE. Old religious claims don’t cut it anymore.

If you aren’t so sure about the inevitable clash between religious and scientific thought, get your butt down to Murray Kentucky, Murray State University, Friday November 22nd and check out Jerry Coyne’s enlightening New Enlightenment perspective: 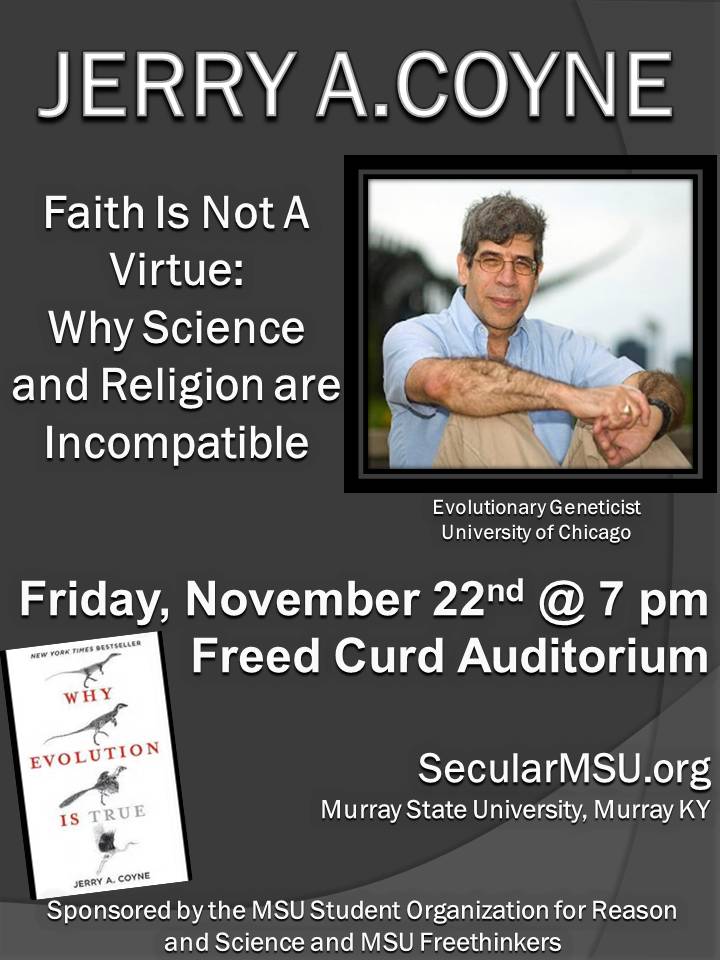