OK, so I have had those stone tools up across my banner for a week now. It is time to talk about them. I promised this site would not just be about exposing the absurdities of religious claims and the dangers of religious thought but include “all things scientific” with a decided slant toward evolution and all the oceans of evidence for it, and particularly my first love: human evolution, extraspecially the unprecedented evolution of our utterly unique cognition. You hear a lot nowadays that all the differences between us and the other animals have fallen, tool use, language (or at least symbolic communication), problem solving, etc. Well there’s tool use and there’s tool use. Animal tool use across a number of species is quite impressive but limited to a one or a few simple behaviors: nothing like the infinite diversity of human tools and tool uses. Then there’s tool manufacture and conceptually driven thought and language that I contend is also only possessed by us human types. I will try to support the hypothesis that human cognition stands “uniquier” than all the other animals qualitatively, in fact ”uniquiest.” As clever as chimps are and yes, they can be taught symbols for simple objects and actions, they will never make you a hamburger, build you a skyscraper or call you a douchebag (even if you are one). But your kid will, eventually. (yes, even the DB part).
The first tool in the upper left is an Oldowan chopper from Olduvai Gorge in Africa (the cradle of humanity as Darwin correctly surmised). No chimp will ever make you one. This one dates to just under 1.5 million years old but is representative of the first tools humans made that we know of so far, beginning at 2.6 million years ago. The Creationists can whine all they want like they are being persecuted for denying any of this exists. We have this stuff. And this is just the tip of the iceberg in human evolution, and there’s a dozen other icebergs. 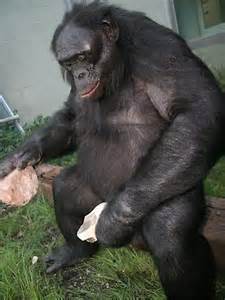 We can teach a chimp to bash rocks together repeatedly and comparatively awkwardly making a lot of dust and small useless chips, eventually producing a sharp flake to cut a string (they don’t do it on their own) but they don’t catch on to the proper angle, force, or orientation to make the chopper tool above or a sharp flake on purpose in a few precisely executed strokes like a 2.6 million year old hominid could. NFW. This is the wellspring of our humanity. Yup, bashing rocks, or rather precise flaking of stones, using a two hand procedure where each hand performs a specific task. That’s the wellspring of our unique cognitive skills. It starts there.
The other tools are handaxes of different types; the bottom left is an Early Acheulian also from Olduvai Gorge and dating to around 1.3 million years ago, the oldest of this early and simple handaxe type dates to around 1.8 million years ago. Every high school kid should know about this stuff, Creationism would be stillborn as a result. We have the data, the fossils, the artifacts: they have concocted stories trying to save the futile attempt of Biblical inerrancy. The other three handaxes are examples of finely worked Later Acheulian Handaxes from Africa and Europe dating to the last couple 100,000 years or so. Much, much more on those later.
Two-handed competence manufacture: the right hand wields the hammerstone that strikes precise flakes off the stone core held and oriented in space by the left hand. No animal manufactures tools. No animal has the precise intentional motor skills of our ancestors and us. I suspect strongly that our unique mental abilities, the concepts and abstractions we take for granted that animals do not have, evolved largely through the manufacture of stone tools. Good enough for now.
To get a feel for our “uniquiestness” beyond the behaviors of the chimps, other primates, and animals in general, check out the video below by the fascinating primatologist and neuroscientist Robert Sapolsky. His talk is a tour de force of human and animal behavioral similarities and irreconcilable differences from a neuroscience perspective. And he doesn’t even talk about the tools. There is so much knowledge we have about ourselves that utterly dispels the primitive, childlike religious based explanations. It is a travesty if we don’t get this out to all our fellow human beings. One species, one tribe.

Academics love to hear themselves talk so skip the extended introduction to the 5 minute mark to hear the incomparable Robert Sapolsky: