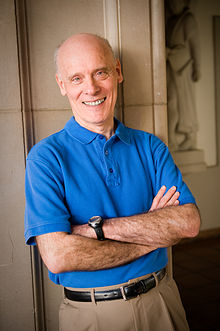 Hugh Ross. Old Earth Creationist.
An astrophysicist. A PhD. A swell guy. He’s got credentials right? So he must know, right?
Given that he’s trained in physics and studied quasars and pulsars and such, it is evidently impossible for him to deny the age of the earth, the universe, the astronomical objects he has studied and is so well versed in.
So he can’t bring himself to deny the 13 billion year old age of the universe and the millions, billions of years stars burn or the 4.5 billion year old earth and solar system.

But he readily denies evolution.
It doesn’t “fit” his interpretation of the Bible.
Of course he knows Ken Ham, Ray Comfort, and all the other Young Earth Creationists are hopelessly deluded in denying the age of everything we have discovered through science, but he’s not.

Some of my Xian friends buy this.
He’s got a PhD! (ooo) He’s a physicist! (ooo wow!) An Astrophysicist! (double ooo, double wow).
He’s gotta be really smart, no, really, Really smart.

Guess that PhD in astrophysics confers one with special powers of knowledge to overturn entire fields of discovery, entire disciplines of work, ignore oceans of data and be smarter than those millions of scientists and thousands of textbooks that explain and confirm evolution.
Right.
The hubris of it is breathtaking.

Hugh Ross may be a wonderful man, good neighbor, dad, husband, even a quite competent astrophysicist.
But I strongly suspect he does not have super-genius intelligence to know for certain how completely deluded millions of other bright minds utterly are. The absurdity is as breathtaking as the chutzpah.

Creationism is the Biggest Lie ever perpetrated on the American public.

Imagine if a cell biologist read the astrophysics literature and then declared the entire field and everyone working in it was hopelessly wrong.
This biologist knew better despite never doing astrophysics, than every astronomer and physicist and cosmologist working in the field, that they were completely wrong about how quasars and pulsars work. Imagine.
And all because it didn’t comport with his idiosyncratic interpretation of a 2,000 old set of writings from nomads in a particularly un-progressive culture around at that time. That’s his reason.
Not because he discovered something incredibly groundbreaking or developed a new theory that had phenomenal explanatory power… no, just because he didn’t like that it didn’t fit with his own personal interpretation of just some of the writings of the particular religion he was raised in, raised in by pure accident.
Would anyone in astrophysics take him seriously? Would you get your astronomy from a biologist if it overturned everything the astronomers were telling you, what all the scientists in the field knew and were working on daily?
I didn’t think so.

Check out Science News any day of the week, start with the new reports and see how many articles have to do with evolution, confirmation of evolution, new data on evolution.
Take a gander at all the people in all the different fields working on and compiling more confirmatory data by the minute on evolution: comparative genomics, paleoanthropology, evolutionary biology, genetics, paleontology, comparative anatomy, etc., etc., etc.

What bullshit.
He’s no better than Ham or Comfort or any other charlatan parlaying his absurd, impossible interpretations because he just doesn’t like what we have found out about our world, and hiding behind the false credentials of a PhD and “faith“.

I’ll say it again:
Creationism is the Biggest Lie ever perpetrated on the American public.