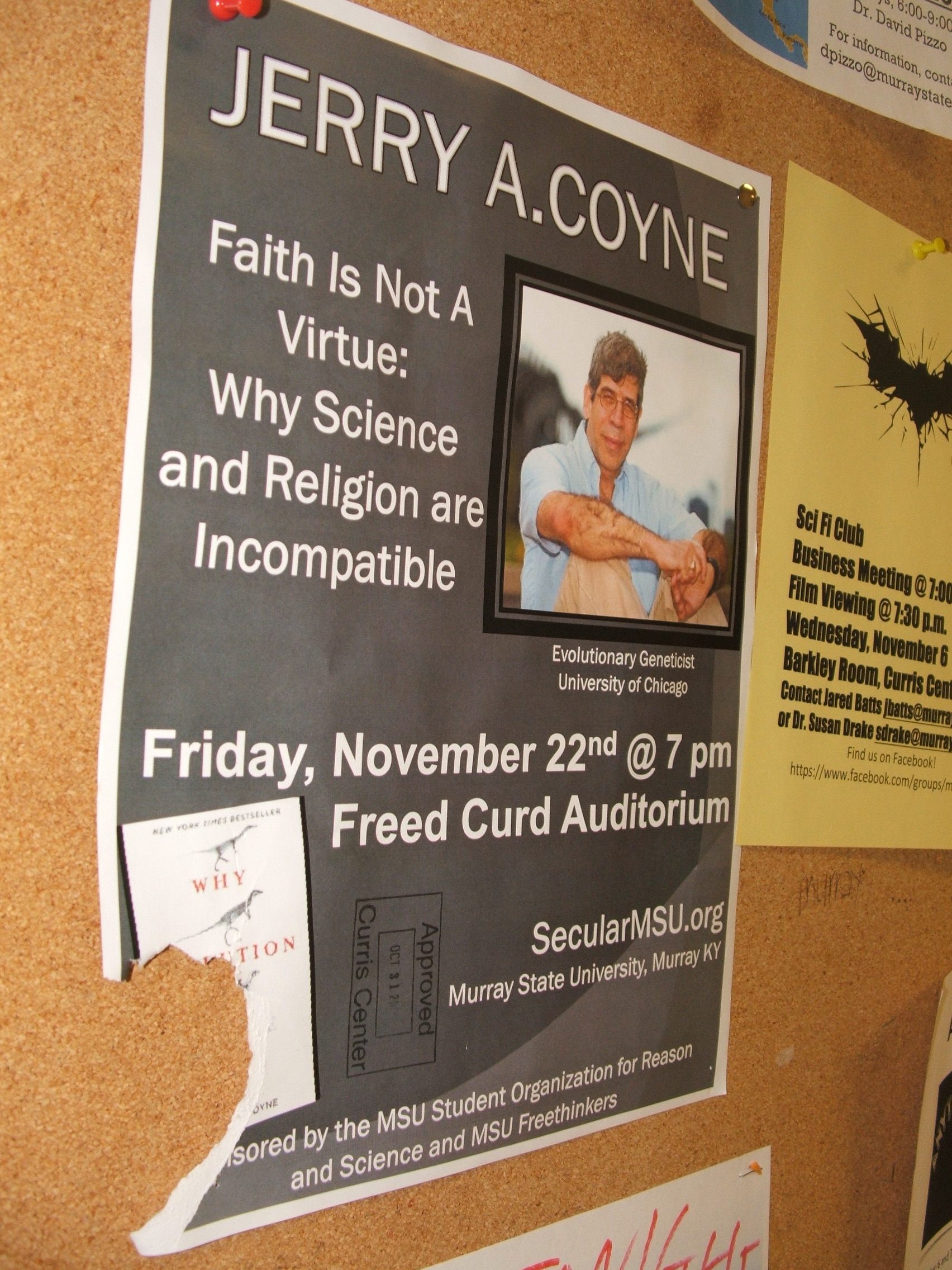 So not only are the two secular groups at Murray State (the Freethinkers and the Students for Reason and Science) where I teach excited beyond belief to have Jerry Coyne coming to speak for two lectures at the end of this month, but we get a shout out from him on his blog!!!
From the cleverly “modified” poster shown above of his talk displayed on a bulletin board here at MSU, you’ll see why…

The reason obviously is not a particularly pleasant one, but unfortunately us secular types are rather used to it. Getting our posters covered up, written on, and torn down is kind of a regular occurrence and not just in the South. When I was finishing my doctorate (in my 50’s, you should try it, its breathtaking) at Northern Illinois University in 2006 or so when campus Secular Student groups were just getting off the ground, we regularly had our flyers written on, covered up, or fly the coop. The best stuff was of course being told we would burn in Hell or we would be prayed for. I even had a running dialogue with some unknown respondent, kinda like the Facebook exchanges and letters to the editor discussions I often engage in now and as so many others all over the planet do now, every minute, every day.
Think about it. It is a beautiful thing really, constant communication between total strangers on as grand a scale as we can imagine, at the speed of light hesitated briefly only by how fast one can type and hit enter. And even if the jamokes that tear down (or tear up, in this case) one of our posters like the one we photographed above and sent to Jerry, can be a pain in the ass, it does make for efficient, clear communication. At very least we know we hit a nerve. We know it hit home.

Xians aren’t used to sharing the platform, especially down here in the South. Unlike science, having alternative views presented is not regular fare. I’ve featured this guy before, but here’s the Reverend Dennis Terry from Louisiana once again, who got his moment of fame (or perpetual YouTube infamy) introducing Rick Santorum during the last Presidential primaries. Check out the first few minutes for his reaction to anything different than what he believes!

Last year about this time, MSU had the privilege of PZ Meyers coming to speak to us. It was on a Monday night, the day after Homecoming weekend. And wouldn’t ya know it, somehow all of our posters announcing his talk (see below) that were in prominent, visible locations just magically disappeared sometime Friday from the high traffic areas on the Quad or in the student center, about a dozen in all. Posters on the back of the four sided kiosks on campus that were less noticeable were immune, as were all the posters up inside all the buildings. Somebody didn’t want Mom and Dad to see what the unbelieving scum on campus we’re up to, especially featuring a talk delineating the conflict of religion and science. 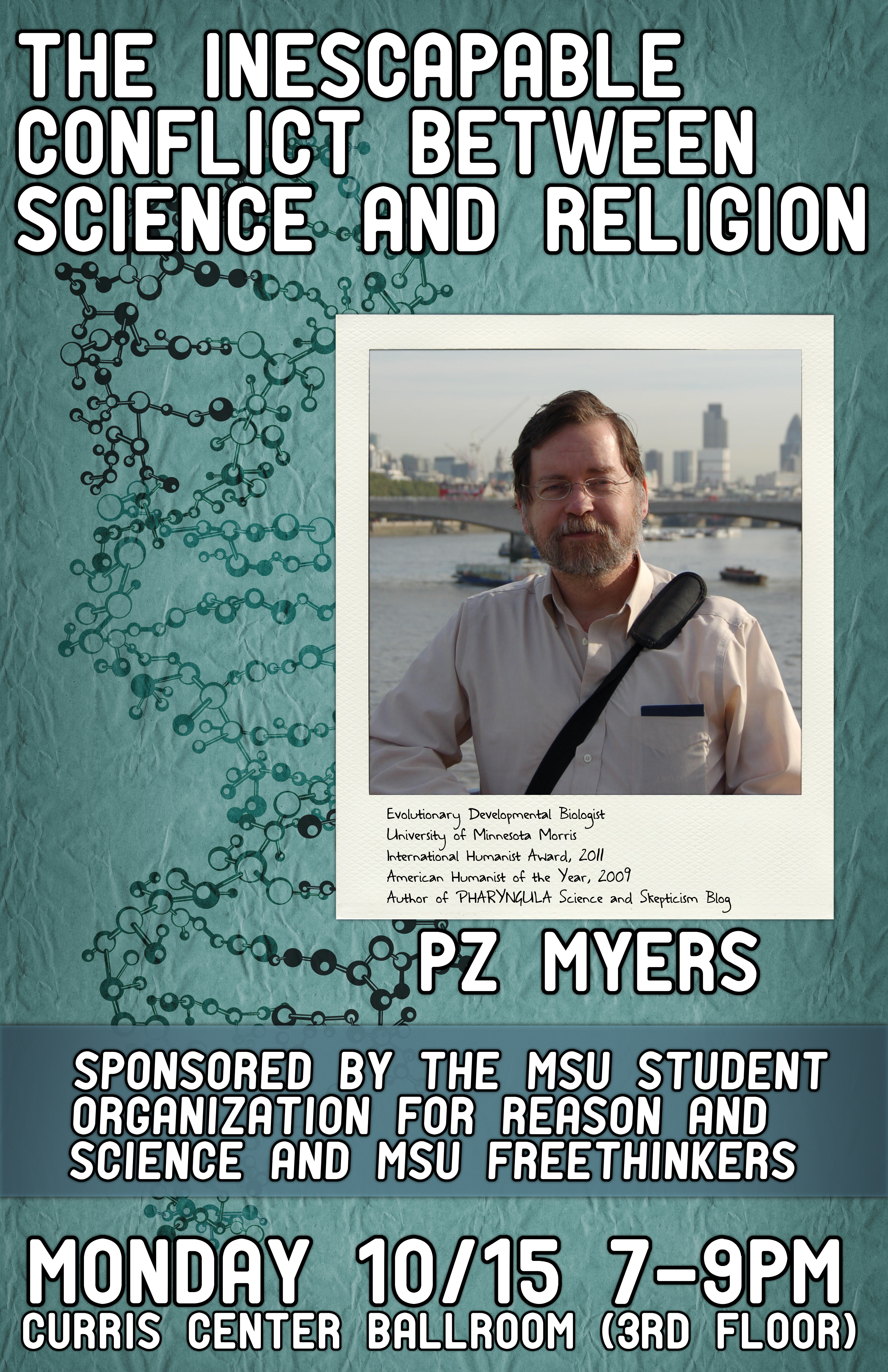 Well, we are at it again and this time it’s a double whammy with Jerry also speaking on “Why Evolution is True” on behalf of the MSU Department of Biology the night before his anti-accommodationism talk for the Secular groups. Whether the local religionists like or not, they are now part of a dialogue…
We’re not going away.
This Secular movement, the New Enlightenment consciousness-raising train has left the station and its rolling on down the line. Get used to it.