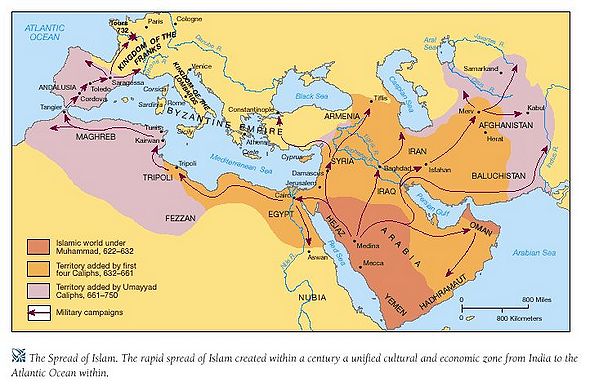 The spread and extent of Islam across the Middle East
“In the Middle East, people were tired of the old dictatorships. They weren’t prepared for what should follow them, but they wanted greater space and voice. The result has been chaos and violence, but perhaps that is the brutal, ugly phase that will force people there to find a way to make their peace with the modern world. After all, Europe went through its own religious wars, wars or nationalism, and world wars before it became the stable continent it is today“.
From an insightful piece by Fareed Zakaria, CNN, this week.

Speaking specifically of the Ukraine: “They look with longing at Poland, which in 1989 had a similar-sized economy to theirs and is now twice the size, and is a member in good standing of the European Union.“
Zakaria continues: “And look at the rest of the world. India and Indonesia have elected leaders who are friendly towards markets, the West, and America — resolutely democratic and yet strong nationalists. Mexico and Colombia have reformers at the helm. In Africa, there are many governments from Ethiopia to Rwanda, where you see real progress in health and living conditions. There are many pieces of bad news coming out of that continent — from Ebola to Boko Haram — but there is also good news, growing economies, a surging middle class.“

It is difficult in today’s global community to not see for yourselves as citizens of a particular country or region or religion or as an individual what is going on all over the rest of the world. Like the Ukraine envying Poland, Islamic countries see they are behind even what are still considered the less developed areas of the world in Southeast Asia and even Africa. Without needing comparison to the Evil Colonial West, particularly the US who many in Islamic countries still blame for most of their own internal problems (which are mostly religious, and political) Mideast countries can compare themselves with countries in Europe, India, China…examples of progress from all over the world that surpass their morass of religious infighting, dearth of science and education and subsequent economic gridlock.

Pervez Hoodbhoy, Pakistani physicist writing in 2009 commented on the state of Islamic progress, or lack thereof particularly in science in his “The Battle for Science and Secularism in the Islamic World.”
An expanded version is available here.
Speaking of the demise of the Golden Age of Islam 800-1200 AD when Islam had rediscovered and expanded greatly on Greek science: “A resurgent religious orthodoxy eventually inflicted a crushing defeat on the Mutazilites. Thereafter, the open-minded pursuits of philosophy, mathematics, and science were increasingly relegated to the margins of Islam.”

Can’t blame that one on the modern West, it didn’t exist yet: the Reformation and Enlightenment were centuries in the future and Europe under the stranglehold of Xianity. The collapse of the Golden Age of Islam came largely from within, presaged by the fact that Islamic scholars while preserving Greek science, either ignored or outright destroyed the heathen Greek literature and drama… 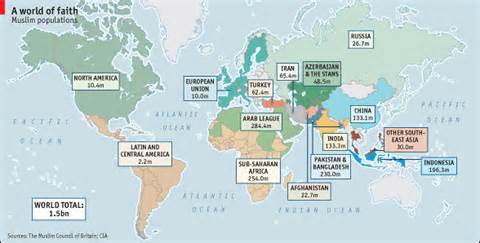 Islam across the world.
Whatever role the US and other Western countries play in the Mideast in this century, Islam is a major factor if not the major roadblock to progress. I’ve said before that Islamic countries are stuck in a religious, political, and individual rights Medieval time warp, some of the 57 members of the OIC (Organization of Islamic Cooperation) more stagnant than others but all ham-stringed by their pre-occupation with religion as sure as the Dark Ages in the West was dominated by the stifling theocracy and intellectual numbing of Xianity.
Islam is no better today than Xianity was as an impediment to progress on all three fronts.

From the OIC: “According to its charter, the OIC aims to preserve Islamic social and economic values; promote solidarity amongst member states; increase cooperation in social, economic, cultural, scientific, and political areas; uphold international peace and security; and advance education, particularly in the fields of science and technology.”
But as Dr. Hoodbhoy points out, without a reformation of Islam toward secular values, there can be no real advancement of education in any field science or otherwise. I’ve cited this quote from Hoodbhoy in a previous post, and it is so illustrative I must repeat it again here:

“Science in Pakistan, as well as in the Muslim world, barely exists today. No major invention or discovery has emerged from this one-fifth of all humanity for well over seven centuries now.” “At Quaid-i-Azam University in Islamabad, where I teach, the constraints are similar to those existing in most other Pakistani public-sector institutions. This university serves middle-class Pakistani students and ranks number two among universities belonging to the Organization of Islamic Countries, with 45 members. My campus has three mosques with a fourth one under construction, but no bookstore.”

That says it all. Reference back to an old book of religious orthodoxy stifles any use of new books, new information , new knowledge. Four mosques at a university and no bookstore. Unbelievable. Islamic countries translate very little of the rest of the world’s knowledge into their own languages. If they had a bookstore at the university in Islamabad, it would be mostly empty.
Hoodbhoy with the final word: “Muslims bristle at any hint that Islam and science may be at odds, or that some underlying conflict between Islam and science may account for the slowness of progress. The Qur’an, being the unaltered word of God, cannot be at fault: Muslims believe that if there is a problem, it must come from their inability to properly interpret and implement the Qur’an’s divine instructions” (emphasis mine).
Stuck, in a quagmire of religious thought.

AND back on our side of the pond:
Rabbi Vered Harris of Oklahoma City’s Temple B’nai Israel said:“I respect people of all religions, or no religions (emphasis mine), who abide by America’s core values of tolerance and respect. It’s unfortunate that Rep. Bennett does not“ (As an aside, notice the good Rabbi nowadays feels it necessary to include a shout-out to us Unbelieving Scum. Consciousness raising progress in evidence once again).

The Rabbi’s comment is in response to Oklahoma State Representative John Bennett’s recent anti Muslim-American statements calling for violence against American Muslims who according to him if they support Islam, they support ISIS and are out to take over the US.
From Bennett’s own website:
“God is first in my life just as He should be first in our Nation. Our success as a Nation is because our forefathers found it extremely important to recognize the one true God and make Him part of this Country” He is against abortion, gay marriage, Obamacare, the whole Conservative package.
Xiansanity™ at is worst.

ISIS thinks THEY represent the ONE TRUE GOD too and hinge the success of whatever Nation they fight in, in fact the betterment of the entire world on recognizing their God.
Islamania™ at its equal height of insanity.

Rep. Bennet’s religious affiliation is difficult to discover anywhere on the NET, despite extensive calls to god and family and opposition to gay marriage and abortion on his own website, it makes no mention of his specific religious affiliation. Even voter info websites show “no response” by the representative to queries for religious information.

However, Bennett is by his own words inspired by and associated with an Oklahoma Pastor, Paul Blair.
From Blair’s own website.
“Since 2001, Paul Blair has served as Senior Pastor of Fairview Baptist Church in Edmond, Oklahoma.
At the age of 26, he made absolutely sure of his eternal salvation, and committed his life to Jesus Christ. His passion is for souls and the restoration of Godly morality and decency in America. As Founder and Chairman of Reclaiming Oklahoma For Christ, and current Chairman of Reclaiming America For Christ, this Patriot Pastor’s desire is for Americans to understand their Christian heritage.”

And Blair is pictured proudly with the revisionist pseudo-historian ultra Conservative Xian David Barton. ‘Nuff said. The Baptists at it once again.

So on both sides of the world you have folks stuck taking their cues from millenia old books, supposed revelations of their one true god. Most folks on this side, thanks to the First Enlightenment and subsequent Age of Reason, don’t take much of their book’s passages too seriously, and are daily arguing over the rest, and except for the Good Baptists and other Conservative Xians like Rep. Bennett and Pastor Blair they have jettisoned the intolerant and violent demands of their religion.

On the other side of the world however, whole countries full, nearly 1.5 billion Muslims their stifling religion having never undergone a Reformation take most of their book very seriously, some even the most violent and world dominating passages. 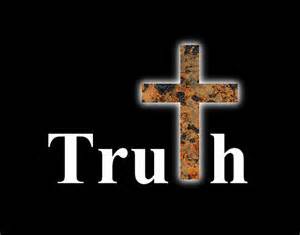 Neither is truth.
Both are absurd fantasies written by men.
Both stifle clear thinking and progress and tolerance.
They both gotta go.
End Religion Now.
Our modern world could be even better very quickly without the absurd Arrogance of Religious Thought.