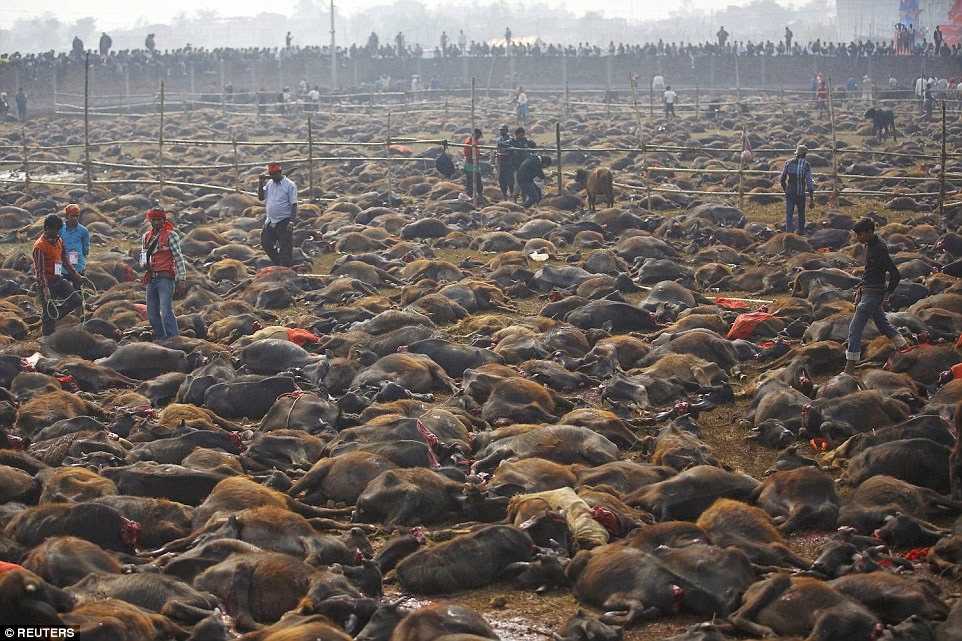 Hindu Animal Sacrifice. Read all about it.
For all you ex-Xians who have gravitated to one of the supposedly “nicer” re-incarnation religions of Buddhism or Hinduism check out the above. I’ve blogged before HERE and HERE on the absurd delusions and patriarchal repressions of Buddhist doctrine, and taken a lot of heat for dissing the beloved Dali Lama whose Tibetan Buddhism is also a motherlode of primitive and misogynistic thinking as much as the “Western” Xian, Jewish or Muslim Abrahamic religions are.

Here we are in the 21st Century where the practice of animal sacrifice as expressed in excruciating detail in the OT in Deuteronomy and Leviticus are universally ignored by Xians and Jews (altho it appears some Orthodox Jewish sects may still practice sacrifice or at least wish for its return) but is still alive and well with Hindus in Nepal.

In Islam an animal to be eaten (not pigs!) is killed by slitting it throat including the carotid arteries and jugular veins purposely sparing the spinal cord so the animal stays alive while it bleeds out. Blood is considered haram “forbidden” in Islam and not kosher in Judaism either. Besides this aversion to blood and thinking pork to be “unclean” the Jews and Muslims butcher their animals the same way, not killing the animal before its throat is slit to make sure it bleeds out properly. Most other meat-eating cultures all over the world kill the animal first, eat pork and aren’t averse to consuming the blood if not by drinking it at least by making sausage out of it…nothing goes to waste, abhored and discarded in service of some ancient and primitive ritual reason. And the animal is killed first. It is not alive, enduring the pain of its throat being slit ear to ear and aware as it bleeds to death.

Kosher butchering websites claim the animal dies within a few seconds as it bleeds out. I would be more than a tad skeptical just how quick that might actually happen even if properly done with one quick slice. I’ve skinned and butchered a number of different animals (i eat meat) and it is not a simple process. Animal hide, sinew and muscle is tough stuff.
I’d also be even more skeptical that each and every time any animal’s neck is slit whether it is done all that efficiently that the animal might not live through a lot of significant pain for much more than a mere few seconds. Inhumane kosher and halal butchering, and animal sacrifice exist only in the 21st century due to wholly unnecessary and absurd religious ideas about food and its imaginary un-cleanliness or pleasing properties to some equally imaginary diety.

People all over the world eat pork, blood, and butcher animals after they are dead so they cannot feel the pain of being partially decapitated for butchery or as an offering to somebody’s god.

Religions are repositories of ridiculous primitive ideas and little more.

AS ALWAYS, love to hear from y’all, comments and discussion always welcome!! Feel free to comment below!