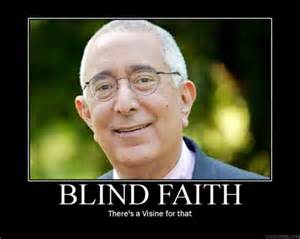 This post is dedicated to the “star” of Expelled who got me started: angry enough at his speaking appearance 2 years ago on campus to write my first editorial reproduced below, questioning his rather bipolar statements on science. Guess that’s why he was a political speech writer, eh?

My first editorial two years ago, entitled BEN STEIN: has he changed his mind?:

“Notoriously absent from the pre–talk publicity distributed on campus and from the filmography of his own website was Ben Stein’s co-writing and starring in the anti-evolution, anti-science film Expelled. The anti-science theme of this movie is most clearly echoed in his comments on the Trinity Broadcast Network where Ben claims it was science that was responsible for the Holocaust and that “science leads to killing people”. So it was rather interesting that in his speech last week here at MSU that Ben decried the fact that American students are far behind on math and science. So which is it, Ben? His public statements and Expelled’s attempt to pin the responsibility for the Holocaust on science or Darwin displays not just an appalling ignorance of history but are an insult to every one of the hundreds of practicing scientists here at MSU and to scientists all over the world.
In Hitler’s Mein Kampf and in his dozens of speeches, the name Darwin is not mentioned once, not anywhere, but references to god and defeating the Jews for Jesus are prominent. The Nazis didn’t quote Darwin or other scientists in their speeches, they quoted Martin Luther’s “On the Jews and Their Lies”, one of the most horrific, hate-filled little racist diatribes ever published, worthy of the most hardened modern-day skinhead. The Krystallnacht horror of 1938 where nearly 200 synagogues were burned was almost a direct exhortation of Luther’s carried out centuries later. Does Ben think science was responsible for the burning of those synagogues because refined petroleum products enabled by modern chemistry were used to initiate the conflagrations?
Darwin’s books and those of other evolutionary biologists were banned and burned by the Nazis. 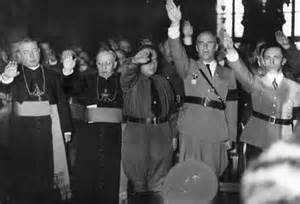 The first treaty Hitler entered into wasn’t with scientists or Darwinists to enable his rise to power but with the Catholic Church, who exhorted its members to vote for Hitler. The Fuhrers birthday was celebrated in the Vatican for years and divine intervention was credited by Catholic bishops when Hitler narrowly escaped an early assassination attempt. And lest Ben and the producers of Expelled forget, scientists of all nationalities and disciplines fled Nazi Germany in droves. At one point in the movie Ben ponders who perpetrated the killing and torture of Holocaust victims, implicating Darwinists or scientific materialists of some kind. The population of Germany was 98% Christian during the war years, about 2/3 Protestant and 1/3 Catholic. The Holocaust was not carried out by a few mad scientists in a concentration camp or two. The estimated 11 million: Jews, Poles, Gypsys and other’s deemed undesirable not by science but by Nazi pseudoscientific ideology and Christian hatred were killed one, tens, hundreds, thousands at a time and not just in the hundreds of camps and ghettoes, but all over the towns and countryside of eastern Europe. These murders were carried out by tens of thousands of German guards, soldiers, SS troops, and policemen recruited from Christian German citizens, not scientists, not “evilutionists”. 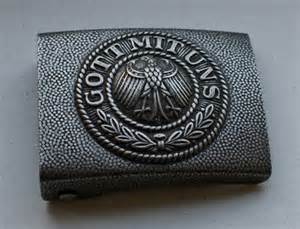 None of them wore Darwin patches on their uniforms, but many had belt buckles inscribed with “Gott mitt Uns” (God with us). To somehow twist the responsibility for the Holocaust from Nazi political ideology and centuries of dehumanization and persecution of the Jews by the Christian churches to science and evolutionary ideas is dishonest in the extreme. I wonder given Mr. Stein’s positive comments toward science education to the MSU crowd last week and the conspicuous absence of publicity of his involvement in Expelled that in light of the facts, he may have changed his mind.”

And so I got this rather disjointed response from a humanities faculty:

“I write in response to William Zingrone’s guest editorial from Feb. 11 “Ben Stein, Changing Views.” Like Zingrone, I do not share Stein’s anti-science views.
And I also detest hypocrisy, misrepresentation of facts, and historical revisionism.
However, unlike Zingrone, I reject the absurd antipathy between science and religion so pervasive in contemporary discourse—whether one is against science or against religion it seems each side believes the other uncommitted to the pursuit of truth—and so I take issue with his effort to rescue science by an attack on Christianity.
Human history is a long nightmare, and if the effects of religion are horrific, they are also benign, beneficial, and sometimes inspiring. Yes, Martin Luther’s abhorrent treatise, “On the Jews and their Lies,” formented longstanding antagonism against the Jews into active hatred, which flowed and ebbed over the next 500 years, and not just in Europe: the United States has its own shame to bear on this front. The church council of the Evangelical Lutheran church has rejected Luther’s text, just as the Southern Baptist convention finally took a public stand against historical support of slavery in the United States, but this is not to say that violence and bigotry under the auspices of Christianity have disappeared.
But the Christian religion is not responsible for Hitler’s systematic extermination of 6 million Jews. Most scholars view Hitler’s religious sensibility as anti-thetical to Christianity and find “Mein Kampf” an unreliable source, given its rhetorical bathos. As leader of the German nation, this master propagandist used threats of a Stalinist invasion to terrify a citizenry against “enemies” at home. In private he said of the Protestants, “You can do anything you want with them, they will submit…” And they did submit in too great a measure, as did leaders in the Roman Catholic Church.Fear and bigotry do not excuse institutional protectionism nor justify the actions of those profoundly unfaithful to their faith. But many Christians were not unfaithful — among them, martyrs Sophie Scholl and her brother, who worked with the anti-Nazi group, White Rose (pan-European and Christian) and Dietrich Bonhoeffer, the German Lutheran pastor who defied the laws of the Third Reich as early as 1933, and supported Jews until his capture and subsequent execution in 1945.
That churches and individual Christians were complicit with Nazism does not establish a causal link between Nazi ideology and Christian dogma, in any case. To assert that it does, as Zingrone suggests, is to commit a “false analogy” — that is, a fallacy of reasoning.
I want to make an additional claim: It is just as specious to discredit Christianity on the basis of, say, the celebration of the Fuhrer’s birthday in the Vatican as it is to discredit science on the basis of Freudian psychoanalysis. 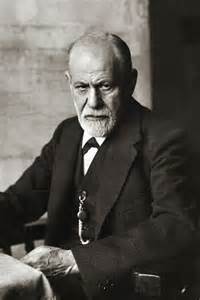 I happen to greatly admire Sigmund Freud. But if I mention his name to my very good friends in the psychology department at Murray State, they change the subject. Psychoanalysis is not a science, they say. But it was — and for many years. In a discipline that must continue to fight for its status as a science, Freud is an embarrassment.
Much worse than embarrassing is another science popular early in the 20th century, one Hitler was quite taken with: Eugenics, the “science” of genetic mutation aimed at improving human culture. In the United States, this meant enforced sterilizations of “undesirable populations” and laws against miscegenation; in Nazi Germany it meant an endless supply of experimental “animals” — human beings — upon whom unspeakable violence was done in the name of scientific research.
Phrenology, race-based biology, taxonomies of types and other “scientific” pursuits are largely discredited today, morally as well as scientifically. This “social Darwinism” has little in common with the work of Charles Darwin, but Hitler was vitally interested in the “scientific” evolution of human betterment, especially as it pertained to the mass extermination of “vermin.” Coupled with his interest in chemistry, physics, engineering and, one supposes, mortuary science, Hitler’s purification of the Aryan race was simplified by these technologies of death.
The questionable history of science, the terrible mistakes made in its name, must not be used to discredit science. Why should actions by Christians discredit Christianity? To paraphrase Zingrone: To somehow twist the responsibility for the Holocaust away from Nazi political ideology to the centuries of dehumanization and persecution of the Jews by Christianity is dishonest in the extreme.
History is complex. Truth is complicated. Let us be more honest.”
_______________________________________________________________________________

OK, you can imagine my confusion over that slice of Freudian free association, so I penned the rebuttal below:

“Dr. X (cannot disclose name) response to my editorial on Ben Stein claims I attempted to rescue science by attacking Christianity. My editorial was primarily a long list of the facts of Christianity’s extensive involvement in the Nazi regime and its hundreds of years of anti-Semitism, neither of which they refuted. And I stated that both Nazi ideology and centuries of Christian dehumanization of Jews each had their roles in facilitating the Holocaust, not just Christianity as she also misunderstands. Nor did I propose a causal link between the two as she misread. Nazi pseudoscientific ideas of eugenics and Aryan racial theory had nothing to do with Christianity and I did not claim so. How Freud was relevant to the discussion I’m not sure but unlike Dr. X I don’t admire Freud or his crackpot theories.

Psychoanalysis was never a science but an idiosyncratic method of therapy based on un-testable speculative theory, largely discredited and never experimentally based. Conversely, most of psychological investigation (psychophysics, neuroscience, learning, social, cognitive, etc.) since its inception and as practiced today was and is based on experimentation, statistical analysis and peer-review, as is modern clinical therapy.
Despite Dr. X intriguing and ignorant claim to the contrary, psychology is quite secure in its status as a science. Mountains of verified and replicated findings about human behavior and mind produced by over 120 years of empirical investigation secured that status long ago. What this digression had to do with my list of facts about the Holocaust is unclear. Also dubious is the equating of chemistry, physics, and engineering with mortuary science as “technologies of death”. Only in the hands of political and religious ideologies do technologies become lethal. Hitler’s appeal to Christian thinking in Mein Kampf is consistent with his and other Nazis leader’s speeches. Again, the Nazis quoted Martin Luther not Darwin or some other scientist as Ben Stein and friends might imply. To fail to acknowledge Christianity’s significant role in the Holocaust along with the pseudoscientific ideology of the Nazi party, is as inaccurate as attempting to downplay Christianity’s current promulgation of homophobia in this country and around the world.

So thanks to Ben Stein for getting me started by being equivocal enough that anyone would have a hard time not noticing the smell, to Dr. X for that lesson in Freudian schizotypic prose, but thanks especially to all of you who have begun reading this blog.
We hit 500 views in the first 3 weeks, 1,000 10 days later, and now thanks to a shoutout from Jerry Coyne at Why Evolution is True we’re hitting over 100 views per day!!!! Holy Moly! 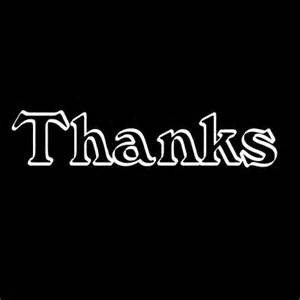