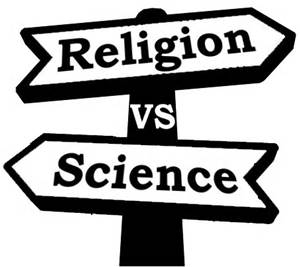 I found an interesting article published by the Religion News Service that reports on some recent sociological research which describes the modern day American’s views on religion and science in slightly different terms: Science vs. religion? There’s actually more of a three-way split.

The researchers divided attitudes on religion and science into 3 groups, based on their survey answers:
Traditionals (43% of Americans) Moderns (36%) and Post-Seculars (21%). The Traditionals fall into the familiar strongly religious category with little knowledge nor appreciation of science. The Moderns are very science oriented and have by and large rejected most if not all religious ideas, but the Post-Seculars maintain a peculiar mix of appreciable scientific knowledge in some domains yet are still quite religious. They tend to pick and choose what science they will allow to supercede their religious beliefs. One immediately thinks of Old Earth Creationists or the PhD’s with science degrees (often in math, engineering or other technical, non-biologically oriented fields) who support Intelligent Design.

One good Catholic commenter wrote in and made this statement expressing their opinion that of course these Post-Secular types are yet deluded and just not as enlightened as more science accepting liberal Catholics like themselves who most certainly do not “pick and choose”:

“I am a catholic and I agree with you. Science and religion should not mix. The earth is old and we evolved does not even conflict with the theology of the pope or the Archbishop of Canterbury or for that matter most Christians. The big bang theory was developed by a catholic priest. You cannot pick and choose with science”

And my reply:
“Unfortunately the clash remains, even with liberal Catholics like you. Science says both transubstantiation and parthenogenesis (virgin birth) dont, didnt happen. They are impossible according to what we know about physics, chemistry, and biology. The cracker and wine’s molecules do not change to those of flesh and blood and virgin births don’t happen in humans. Those are deal breaker tenets of the Catholic Church. If you think transubstantiation is merely a metaphor, you are a Protestant. And if you fully understand the virgin birth as described only in Matthew and Luke is a myth, it is difficult to call yourself a Christian. You are correct one cannot pick and choose with science. All religions make empirical claims falsified by science. You cant have it both ways. You seem to be avoiding the same cognitive dissonance the Post-Seculars do by compartmentalizing your beliefs away from each other, which all religionists must do to maintain supernatural beliefs such as yours.”

Unfortunately for our Catholic commenter our modern scientific understanding of human sexuality is in direct opposition to these primitive, patriarchal conceptions of what is “natural.” The human animal quite unlike any other critter has thousands of sex acts per live birth, with the human female receptive year-round and throughout the menstrual cycle. Most animals have one or two short periods (days) or estrus, where the female is in “heat,” ovulating and fertile and copulations are quick and number in the in the single digits for every live birth. Humans use sex not just for procreation but pleasure, diversion, bonding, stress release, and entertainment. It is not at all just for making babies and there is no “Natural Law” anymore than there is a God. This little digression on religion vs science on sex is but one example of the inevitable conflict.

Again, nearly every pronouncement by any religion has some empirical claim about how life is or the world works and accordingly is in direct conflict with scientific inquiry. Religious claims are usually ancient, primitive, purely speculative and often contain supernatural elements (transubstantiation, parthenogenesis, heavenly ascensions, spiritual entities and realms etc.) that are also in direct opposition to scientific findings. They are made up and usually dead-nuts wrong.

So it seems with greater science education, the Nones are increasing or as termed in this study the Moderns, but along with that the Post-Seculars who are beginning to embrace the modern knowledge of science but cant quite let go of religious indoctrination. As science knowledge diffuses through modern culture already saturated by millennia of religious thinking, it is really no surprise we have a group stuck in the middle of the transition from unquestioned religious dominance to irreligious scientific secularism.

I’ll take that. They’re half-way there, these Post-Secular types. And their kids, the next generation will start off with 1/2 religious parents instead of mostly religious parents as the Post-Seculars had.
I’ll take that progress for another reason. Cognitive dissonance tends to wear one down eventually. It is hard to think only partly scientifically or confine clear, skeptical thinking to only one domain and not have it spill over into all areas of thought. Like Dan Dennet’s conception of “universal acid” thinking scientifically eats away at the walls of the compartments one uses to keep contradictory beliefs separate. And the children of Post-Secularists may have even more appreciation of science to see through and not succumb to their parent’s bullshit.