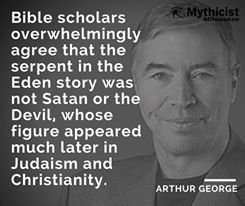 Arthur George spoke on the 2 ancient mythical stories in Genesis that give contradictory Creation accounts. From an educated standpoint its no surprise they don’t match up in that one may have been written as early as the 800’s BC, next, the one which actually starts Genesis, around 500 BC. Neither were written for a “Bible,” both winding up compiled in out of date and mixed up order even more centuries later around 300-400 BC or so when the Hebrew Bible (Old Testament) first appeared.
In addition, both accounts come down to us with no clue who the authors were. Hmmm.
This is the real deal information we know about the mythological status of the Bible, yet at the same time for sure right down the street, in fact in churches all over Milwaukee, the US and the world, on this fine Fall Sunday morning, children were being lied to that these blatantly mythological verses and the rest of the Bible itself are the unquestionable words of some god.
We as a species need to outgrow this shit and secular groups like Mythicist Milwaukee are popping up all over the place to educate folks to the mythology behind it all.

Next up, Mandisa Thomas of Black Non-believers: 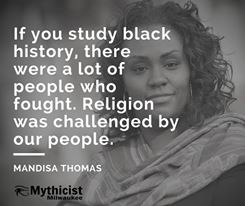 Mandisa enlightened us all to the fact that the black community tho overwhelmingly hard-core Xian, has had its share of openly skeptical thinkers past and present. And she represents the small but growing number of African-Americans who are questioning the faith of their family and community and coming out as non-believers. Like so many secular thinkers who don’t buy into their faith but keep quiet to avoid conflict with family and friends, one wonders that an even higher percentage are African Americans maintaining a low profile but have already left the fold in their minds. Mandisa made it clear that doubt, even ridicule of religion is nothing new in black culture. 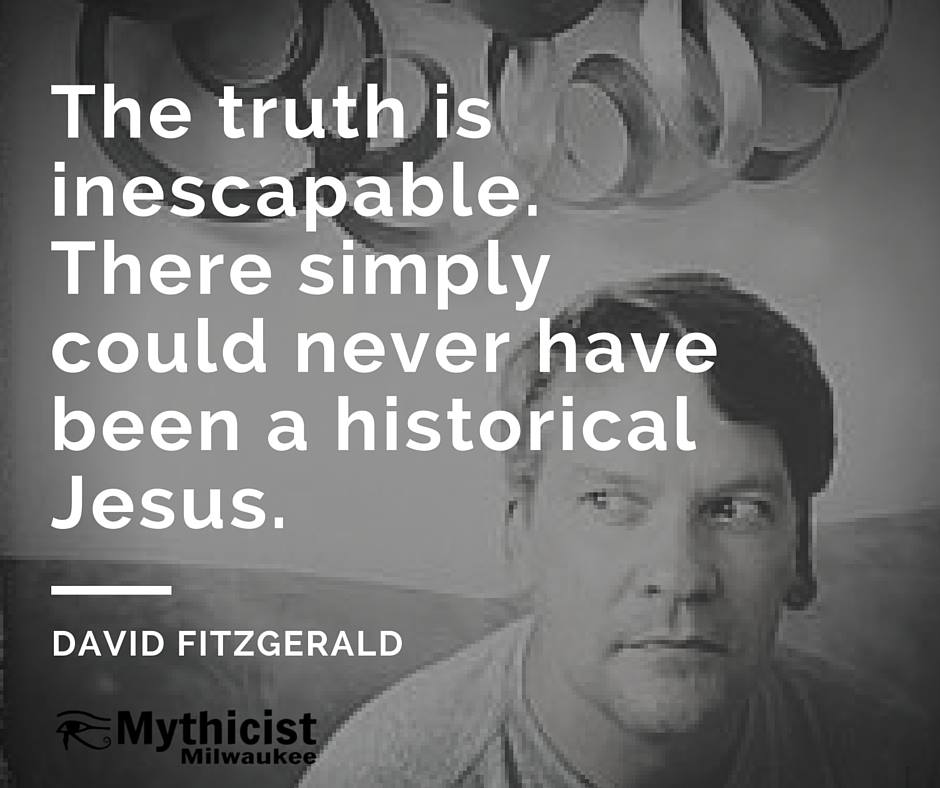 Third, David Fitzgerald spoke on his third book (in progress) that will examine the reluctance of some in the atheist community to accept the significant findings of the recent spate of scholarship published by Richard Carrier, Earl Doherty, Robert Price and others on the mythicism of Jesus. It is becoming apparent to many of us in the secular community through these scholars and Fitzgeralds straightforward presentations and his first book Nailed that JC most likely never existed at all. David is doing a great job spreading the word on what was once a silly, even absurd conjecture which is rapidly growing to consensus based on a preponderance of evidence for the mythic status of Jesus himself and an utter lack of evidence for him being an historical figure.

And last to the delight of the younger crowd, Walter Reed aka Killah Priest formerly of Wu-Tang clan spoke on his lack of faith and quest to study the spiritual and historical aspects of all religions and why he incorporates that personal journey in his lyrics for his solo work. My son was delighted too as I brought him home Killah’s autograph. He couldn’t wait to show it to his friends.
It was very cool seeing two openly secular black folks speaking at an atheist conference. I’ve written on the diversity present at secular meetings before HERE and it was very evident today not only with the speakers but with the crowd as well. There was a phenomenal mix of ages, genders and race among those attending. Non-belief is a very accessible and equal opportunity endeavor.

In between the presentations we were treated to the comedy and Biblical exposition of Jozef Richards in a hilarious segment of Myth MKE’s “Holy Shit”. Do give it a look, you will laff ur butt off. And you will get educated on the more arcane of the “god-given” commands in that ugly and totally weird OT at the same time. Some “Good Book.”

Mythicist Milwaukee has been around about 2 years now and they have a strong secular agenda to educate the public on the mythical content of all religion and a set of core beliefs that define their perspective. From their website:
“We believe in:
LGBTQ equality
Women’s rights
Children’s rights
Elimination of religiously-based laws
Religious pluralism and the separation of church and state
Ethnic equality
We strive to contribute to a world free from religious oppression and religious bigotry.”

They stand for everything most religions don’t and like so many groups coming to the fore in the last few years, they are doing something about it and working to make this a religion-free world, one myth at a time. THNX to all who worked so hard to put on another excellent conference!
Information Kills Religion and the Myth MKE team are one formidable bunch of myth killahs!