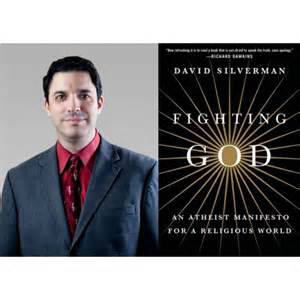 I enjoyed his book. Do read it. He is right, we are winning and his firebrand atheism, up front and in your face is as effective as any other approach, tho he takes a lot of heat for it.
I support him 100% on that. We need more Dave Silvermans, just like we need more Friendly Atheists like Hemant Mehta.

But I disagree with his insistence that we all must identify exactly as he says we should. He spent his 20 minute speech at the Reason Rally scolding us varied secularists over not using the label atheist often enough to his liking, a theme he hammers on in the entire first chapter of his book.
I think he is off the mark and making a mountain out of a molehill for a number of reasons. What he is bitching about truly doesn’t matter. The secular cause is advancing just fine whether we do it exactly his way or not. His consternation over this point is similar to his insistence that we should never capitalize “atheist,” a point for which he felt it necessary to add a 2 page special editorial note prior to chapter one in his book to inform us of the “correct” way to do it. Really? It is that important to you whether the A word is capitalized or not? Do you really think 2 minutes after reading atheism one even remembers or their thinking was influenced in the least if either lower or uppercase was used, seriously? I mean really, WGAF?
Well, Dave does.
As for his vehement insistence about labeling oneself an atheist:

1. Not all secularists are atheists. Sorry, Dave. We have deists, pastafarians, agnostics, secular humanists, pantheists, pagans, freethinkers, even believers like Larry Decker, head of the SCA. It is non- religiousness that unites us: secularism. Atheism is almost incidental. It is the rejection of religious claims and the intrusion of religion on all humans lives that unites us. The secular ideals of reason and tolerance, putting individual human rights above all other ideologies is what we promote.
You can be unsure of the god question, or claim it is unanswerable (agnostic), or believe in some sort of non-intervening higher power or principal of guidance (deist), feel that everything in the universe partakes of godliness (pantheist), or even believe in a god, even the Xian one as Mr. Decker does (believer), and still be a card-carrying secularist. It is the shared secular values of equality, freedom, evidenced based reasoning, and tolerance that bring the non-religious together.

2. It’s called the Reason Rally, not the Atheist Rally for just the above reasons.
We are non-religious and opposed to religious thinking which promotes scriptural and personal authority over human rights, regardless of where we fall on the god question. Secular humanism is the all encompassing term. Maybe that’s why the SCA, SECULAR Coalition for America, uses that umbrella term for all the 18 sponsoring non-religious organizations that make up its membership including Dave’s own American Atheists, the Freedom from Religion Foundation and various other humanist and freethinker groups.

3. Atheism doesn’t necessarily entail secularism. The most famous dastardly atheists that gave atheism its bad name such as Stalin and Mao, replaced repressive religious dogma with their own horribly destructive political ideologies which also, just like religions, put mere ideas of men above human rights, the exact opposite of secular ideals. So being an atheist doesn’t guarantee anything else, much less secular humanism.

4. Atheist is a limited term, in Dave’s own word it is merely “the absence of belief in the existence of a god or gods.” That’s all it says. The New Enlightenment movement is so much more than just lack of belief in a god, it is a secular values movement, displacing religion with human rights and science. The Xians labeled us the New Atheists, but the secular advance is so much more than that. The rejection of religious delusion and repression in the lives of all is the main point.

5. Atheism is not the only effective term. “Nones”, as PEW Research has labeled those “not affiliated with a religion” is where we get the nearly 23% of the US population figure as being in favor of secular values whether still believers like Mr. Decker and so many others, or not. PEW Research reports that many of the Nones still identify as Xian, and still believe in some form or another. In addition, others like to emphasize their secular or ethical humanism as more important to them than the god-question.

6. Despite his claims to the contrary, other terms are effective. I am an Atheist. I think the whole idea of gods to be ludicrous, and I think there is no evidence for any spiritual intelligence or even guidance principle in the universe. All that is merely wishful thinking on human’s part. An old bad habit we can drop. But I most often use the term “non-theist” to describe myself and for a number of reasons. It avoids the incorrect connotations promoted by Xian propaganda that atheists must be: nihilistic, angry, angry at god, despairing, without a basis for morality and the like.
When I use non-theist, no such ideas arise and I can educate the religious person I’m speaking to without having to overcome the nonsense about non-believers their minister taught them. And they catch on real quick that I don’t believe in any gods and why, so the term atheism gets defused along with it, one of Dave’s main points. I don’t avoid the term atheist, I just like the non-theist approach better and I really give a fuck what Mr. Silverman thinks of it. I especially like “Unbelieving Scum” even better, I wear that shirt with pride!

7. Despite only a small percentage of the non-religious identifying as atheist, the secular movement as described by all the evidence Dave amasses in his book, is growing just fine, even though we are not all doing it his way.

8. So, identify yourself with whatever is accurate to your thinking and fits your personality. I encourage you to come out as non-religious using whatever label suits you. It all works. As long as you are espousing reason and tolerance, science and evidence based reasoning over religious dogma and division, you’re being an effective secularist.

9. I hope Mr. Silverman saves his ire for the real enemy, not us secularists who, according to him need to “cut the crap” (oh, give me a fucking break, what are you, my mother?) and do it his way, but for religion and the religionists worldwide who promote dogmatic dominance over so many, ruining lives all over the planet. They’re the real enemy, go bitch at them.

10. The mistake is in telling each other how to be a non-religionist, non-believer, secularist. I covered the controversy over Lawrence Krauss’s claim that labeling teaching Creationism to children is child abuse awhile back. Neil Carter really took exception to Krauss’ spot-on attack, to which I agreed with Krauss completely. Teaching Creationism is fucking child abuse.
That said, we need more Neil Carters and more Lawrence Krauss’s without a doubt, and more firebrand atheists like Dave Silverman and Friendly Atheist Hemant Mehtas as well. But I wouldn’t dream of telling Neil Carter how he needs to do his secular activism. If he is uncomfortable with Krauss’s terminology or my approach or Silverman’s in-your-face style, by all means he doesn’t need to emulate any of us. He ought to do it his own way…just don’t tell anyone else how they have to do it, or that they must do it your way. That’s bullshit.

Do read his book. Despite his obsessions with the word atheist and not being a dick, it is informative and worthwhile in many ways. And his involvement in the movement and the Reason Rally itself is beyond admirable. We need everyone in the fight against religious intrusion into our lives.

end religion now
all of them

4 thoughts on “David Silverman, fighting over words as well as god”