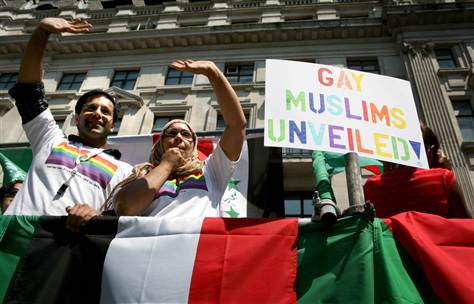 I truly had 3 other post topics set aside and was going to take a break from Islam, but there it is again in the horrific and much discussed Orlando massacre. This weekend’s (6/24-26) USA Today edition featured this OpEd by Omar Mahmood entitled Islam’s struggle with homosexuality.
From Mr. Mahmood’s opening paragraph:
“The knee jerk reaction is to deny that attacks have anything to do with true Islam and to tar anyone who says otherwise as Islamophobic.”
And he goes on to say: “But we need an honest conversation about Islam itself.”
Hear, hear!! We need an honest conversation about all religions. But it is difficult for so many.

I’ve watched this phenomenon for years now, in my colleagues, in the writings of the Regressive Left, on FB exchanges, with friends, and most recently on Bill Maher over the very same horrific Orlando massacre. We seem to trip over ourselves to exonerate religion from any culpability in bad behavior. It is like dissing Mom or apple pie (TRIGGER WARNING: I don’t like pie). We can’t wrap our heads around that religion is not ultimately a good thing. We have to save that perception somehow. Whether its saving the Catholic Church from blame in the priest-child rape scandal that has stretched for decades now and is yet, unbelievably ongoing, to exonerating Islam from any influence of this deranged “lone wolf” shooter.

The guests on Bill Maher decry it was mere publicity or after the fact sanction that the Orlando shooter Omar Mateen pledged allegiance to ISIS. While it is true it appears ISIS had no involvement in the planning of his actions at this point, it is the shared doctrines of mainstream Islam that Mateen, ISIS and most Muslims are taught that promote their insane behavior such as throwing gays off roofs, or gunning them down by the dozens in nightclubs. And he said more than just allegiance with ISIS, he praised the existence of the caliphate as well. All Muslims are taught the world would be perfect if the caliphate were re-established and everyone (the umma) in their god’s world would just submit to Allah and follow sharia law. ISIS claimed to establish the caliphate as did the Taliban in Afghanistan and even Boko Haram in Nigeria. It is part and parcel to the religion. Restoring the caliphate and extending its rule over the globe would lead to the best of all possible worlds in the Muslim psyche, and Mateen pledged his allegiance to it, while killing gays just as Muhammad prescribed.

As Mr. Mahmood notes, Muslim apologists trip over themselves to exonerate Islam, even with straight up lies: “Any such acts of violence violate every one of our Prophet’s teachings.” Unbelievable.
Mahmood sets the record straight:
“This overlooks the fact that the prophet Mohammed condemned homosexuality and called for violence against gay people”
The Koran and Hadith have plenty of passages that confirm Mr. Mahmood’s reference to Muhammad’s clear call to violence against homosexuals which utterly refutes the pathetic outright denial of reality given by the Islamic apologists. This dodge by those who must say “But no, religion can’t be to blame” is not new.

Check out this video some years old of Sam Harris listening to the ludicrous pleadings of one of his audience members that: Muhammad was a peaceful man. The absurdity of that statement is breathtaking. This woman repeats to Sam, the oft-heard claim that religion is somehow only good and that extremists have “bastardized” the religion, have hijacked all religions once again, the religion is not to blame.

Muhammad was a sex-slave taking, beheading, conniving warlord. Read his biography from the siras and hadith. ISIS, Boko Haram, and the Taliban all have taken sex slaves in emulation of their prophet, whose actions are deemed perfect and form the template for all Muslim behavior. Thankfully most followers of Islam are regular peaceful folks just trying to get by like everyone else on the planet, who like most Xians ignore or are unaware of the ugly parts of their scripture, but unlike Xianity, the compulsion to emulate Muhammad goes far beyond the thinly voiced and rarely considered “WWJD.” The acts we see so common in Islamic terrorists, especially in their insane sectarian violence which kills more fellow Muslims than any other group by orders of magnitude, is promoted plain as day in their scriptures. The terrorist groups and the lone wolves are merely following the dictates of their religion and the example of their perfect prophet. Gays, infidels, those polluting Islam should be killed…and it gets you into heaven…and guarantees the same for your family. This is taught to an extent unheard of in mainstream Xianity. Xians question or outright deny so much of what is in their book: it is an entirely different story with Islam. As Mahmood notes, that despite their simultaneous denials:
“Mainstream Muslim American religious leaders teach that everything the prophet said was true…” And this is true of Islam wherever it is found.

Give his article linked above a perusal. It is short and to the point.
Islam is no religion of peace and Muhammad was not a peaceful man by any stretch.

Imagine no religion. No ISIS. No Charlie Hedbo attacks, no Orlando massacre, no 9-11. 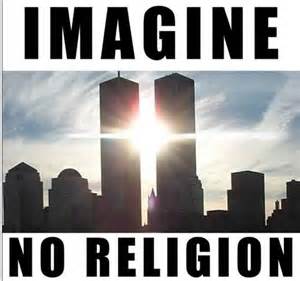 No “struggle with homosexuality.” Modern knowledge (the science of sexuality) says homosexuality is common in many species and variance in sexual orientation has a genetic and primarily prenatal hormonal basis…and there is no problem. There would be no “struggle” with it in our modern culture at all, sans religion.
The Gay Muslims pictured coming out in the image at the top of this post are the exception.
Mahmood:
“I know gay Muslims who live in hiding, who endure a never-ending psychological torture.”
Yes, and they are imprisoned, hacked to death on the streets, thrown from rooftops, or shot up in nightclubs across the globe, and condemned to death in 9 Islamic countries.
“But Islam has nothing to do with it.” So plead the apologists.

When are we going to teach our children to ignore claims that millennia old writings of men from primitive and barbaric times are “truths for all time” or have anything to say to the modern world?
People die or live ruined lives because of it.
We can outgrow this.