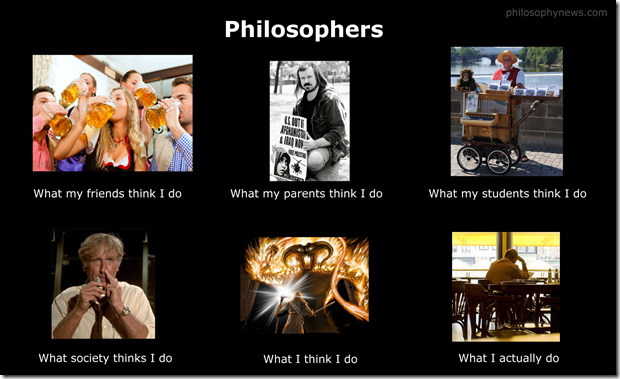 I get irritated. Character flaw: probably. I’m not better than anyone else in the personal faults department, that’s for sure. Patience is not always one of my virtues and I find I can only listen to so much bullshit for so long. I suppose that’s what drives me to bash religion’s absurdity as often as I do, along with the natural human empathy we all share that compels me to try to change the world for my brothers and sisters who are merely buffaloed or seriously persecuted to varying degrees by religious claims and coercions. But there’s a special place in my anger box for philosophy and it shares that space with theology. Theology gets its drubbing regularly so philosophy gets its moment of retort this morning.

The physicist/cosmologist/author Lawrence Krauss took some heat awhile back for pretty much saying words to the effect that philosophy was pretty much fucking useless, and especially philosophy of science. Under pressure he back pedaled a bit and apologized for hurt feelings, but really didn’t change his stance or rescind his perspective:

“With honest philosophers I have interesting arguments… It’s always interesting to hear people’s thoughts. It is true that scientists and philosophers tend to talk past each other, and theologians are one step down from philosophers (or 100 steps down) but that’s what I want to point out. I was at the Vatican, invited to the Pontifical Academy, and I said to them something that sounded facetious but it wasn’t. I was amongst theologians and philosophers and I said, ‘Look you have to listen to me, but I don’t have to listen to you’. I wasn’t being pompous, although it sounds like it. But scientists don’t have to understand, or know anything about what philosophers write. They don’t; the proof of the pudding is that they don’t. They don’t read philosophers, they don’t think about what philosophers have to say. But a philosopher who wants to talk about the world has to know what science is talking about.”

And it wasn’t the first time I’d heard a practicing scientist express disdain or at least indifference to the pronouncements of “professional” philosophers trained to coalesce the vapors of existence for us so we can continue on with our science finally knowing what the fuck we’re doing thanks to their pronouncements of what science is and how it really proceeds.

Krauss is of course referring to the fact that all the armchair rationalizations and deep thinking (something he fully understands, he is after all a theoretical physicist) of the theologians and philosophers doesn’t mean squat if it doesn’t map onto the real world. You have to do the empirical observation part, you gotta collect the data.
Like Jacob Bronowski has said: “When people aspire to the knowledge of gods, with no test in reality, this is how they behave.” He was referring to the horrific case of the millions who died at the hands of the Nazis in the Holocaust, but armchair philosophizing and theologizing (new word) can get you in trouble as well…

Yo Freud, didya catch that?

The essence of it all is captured by the incomparable Mel Brooks and this bit from “History of the World part 1” on Stand-up Philosophy!

Of course philosophers will maintain that we just don’t understand the “nuance” of the argument (borrowing that esoteric dodge term from their theological cousins). Yeah? Nuance this. They’re right, we just couldn’t live without the clarification and critique of the professionals. Oh, please.

So philosophers will argue we can’t bootstrap ourselves into any position like philosophical materialism or any sort of realism because we have to use our imperfect senses and the assumption of materialism and the empirical scientific method to proceed and we can’t justify any of that using those same methods. It resembles the problem of induction in that if it can’t be logically justified then we can’t know anything… but somehow we manage to plod along learning more and more about the world we find ourselves in by observation, guided by theory, and inducing our way along to likelihoods of what will happen next.
Imperfect and illogical, it seems to work pretty good.

In the milliseconds that you used your sensory perception to decipher the phonemic stream you watched being issued from my lips and reached for the doorknob you walked right into the refutation of your own argument, stepping on your dick in the process.

It reminds me of the whole flap over “free will” that has been well-covered by the ever-thorough and enlightening Jerry Coyne over at WEIT “Why Evolution is True“.

I have to admit although I’ve read a fair amount of the free will discussion and figure the deterministic neuroscience view is most likely correct, I honestly don’t care. I am as indifferent to the ultimate end of that story as I am to the Popperian and Kuhnian (especially Kuhnian) characterizations of practicing science.

“You don’t have free will.”
I don’t? Shit, give me a cup of coffee.
“No you really don’t, you couldn’t have chosen differently.”
Fuck, give me some tea, then.

Paul Churchland, a philosopher with views rather similar to Krauss’s, suggests we detect and predict “nonrandom fluctuations in physical magnitudes” pretty regularly. If as the mystics warn us; “This is all an illusion”…
Well boyz, it seems to be a rather common and consistent one so we’ll just keep plodding along in Plato’s cave with our wishy-washy realism, describing the shadows on the wall to a better approximation.
So while the philosophers are busy coalescing more vapors in the corner for another millenia or two, the scientists saunter back to their labs oblivious to the ongoing self-gratification festivities of their esteemed colleagues, armed with their imperfect and untrustworthy sensory apparatus, meat puppets that they may be and continue to figure out how the world works, whatever that is.
Philosophy is fun; just don’t take it too seriously.
Check, please!