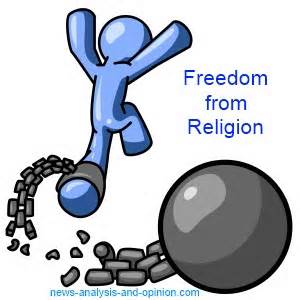 The head of a Muslim student group, who I met briefly one night nearly 8 years ago, said to me with a look of disdain bordering on disgust that he knew all of us non-believers were out to turn everyone in the world into atheists. WRONG.
Frankly, most of us don’t give a shit what you believe. We have better things to do than Evangelize for Atheism. What you ultimately believe is your business. We may think the strong agnosticism that characterizes the conclusion of most non-believers (we leave open the possibility that if evidence of a god appeared we might need to change our minds) is the most reasonable position, but what you come to believe or not is your personal and private choice.

Non-believers don’t threaten anyone with eternal damnation or social ostracization if you refuse to believe as we do. We don’t admonish others that they will surely descend into a despairing, nihilistic, hopelessly immoral existence if they don’t join our club of disbelief.
We have a more modest goal: Believe whatever you choose, but leave everyone else alone.
More bluntly: Whatever cultural bullshit you want to buy into is your business, but kindly keep it to yourself.
Our goal is to eliminate the moralizing restrictions the religious are so quick to impose on everyone else. You’ve been misbehaving to the detriment of all for centuries, it is time it comes to an end… more like an abrupt halt. 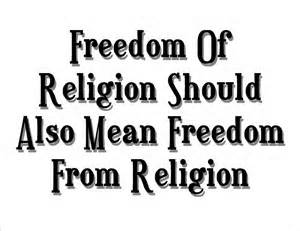 The Big Two: Islam and Xianity feel it is their duty, their moral imperative, to make sure everyone on earth follows their rules for right, moral, god-pleasing behavior whether you are a member of their religion or not. WTF!?
Can there be anything more obnoxious?
One of the worst examples, that has cost many lives, where real people die, is the Catholic Church’s insistence on restricting abortion services, because “it’s against their religion.”
In Ireland it’s law and it killed this woman: Savita Halappanavar

Well, I don’t belong to your fucking religion, number one, and number two, your archaic ideas about the beginning of human life and infusion of a soul are antiquated, unscientific dogmas from the Middle Ages. They are bullshit. 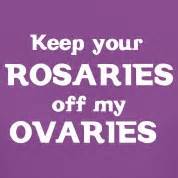 Believe what you must but you no longer get to impose your delusions on anyone else. We want you all to be like the Amish or the Jains; devout but benign, utterly un-Evangelical or intrusive to the behavior of others. That’s what we want.
We don’t give a flying fuck if you wanna believe in the Flying Spaghetti Monster, go for it, enjoy, whatever delusion you entertain: please keep it at home.