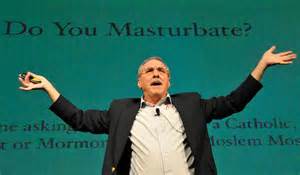 Darrel Ray, author and secular speaker opened his talk last night (4/15/14) at Vanderbilt University with the above rather direct and simple question. Having a rather hip crowd the majority of us (your author included) raised our hands enthusiastically thinking, “fuck yeah we do!”
But not everybody. He then reminded us all that surveys have shown for years now that roughly 93% of men and 70% of women certainly do pleasure themselves, so there were more than a few of us out there that were lying!
That set the tone for many of the excellent points throughout his talk. We live in a culture dominated by religion, predominantly the Xian religion in its various forms here in the US that shame us into denying our sexuality. Darrel related an anecdote about a Baptist minister of whom he recently asked that same “uncomfortable” question: “Do you masturbate?” The good reverend not surprisingly pleaded the 5th but readily admitted should Dr. Ray ask his entire congregation of God-fearing Baptists that very same question, most assuredly no hands would be raised… and the vast majority would be lying.

This illustrated a second major theme of his talk “Biology Happens.”
If you haven’t read the book, do so. Without giving any details away, this is the blurb from Amazon:
“Why are all the major religions consumed with sex? What makes sex so important, whether Buddhism or Islam, Christianity or Mormonism? What is the impact of religion on human sexuality? This book explores this and more. It ventures into territory that has never been examined. You will be surprised at how much religion has influenced your sexuality, who you marry, the pleasure you get or don’t get from sex, and what you can do about it.”

By nature, despite what the churches tell you, despite the abject denial of our very normal sexuality by our Xian friends like the Baptist minister and his all-too-typical congregation ashamed of their own sexual practices, we are a very sexy species having thousands of sex acts for every live birth, way beyond the frequencies of any other species.
We don’t just have sex to procreate… we use it for bonding, stress release, FUN! AND ITS OK!! That’s the message. IT IS OK!

All the old virgin men in the Catholic church (later joined by their similarly repressive Protestant counterparts) have been telling us differently for millenia and they are utterly, dead-nuts, straight out WRONG.

Their negative influence however, the utterly repressive influence of all religions on our psyche is a theme Dr.Ray returned to towards the conclusion of his presentation. Even us enlightened, liberated secularists who may have jettisoned the absurdities and cruelties of religious belief altogether still suffer from what I have called often on this blog “Cultural Inertia™”.
Darrel pointed out one telling example of this in the reluctance, the shame many of us “Christian Atheists” as he called us, who still have a hard time raising our hand when its time to stand and be counted as masturbating humans, which we know damn well most of us are.
The first time I heard Darrel Ray speak roughly two years ago at SIU in Carbondale, Illinois, I didn’t, couldn’t raise my hand either, I’ll admit it.
In a crowd of 100-200 strangers, that was way too personal, too revealing. And why did I feel that way, as many still do?
Ray pulls no punches in his book or his talks in laying the blame for our shame squarely on the doorstep of religions, damn near all of them.
Thanks to Uncle Darrel, I proudly raised my hand this time around.

Read the book… and/or next time Darrel Ray is in town, don’t miss his informative, entertaining, and enlightening talk. 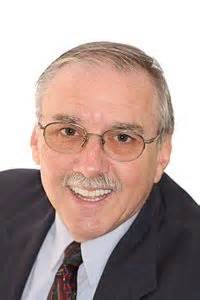 Darrel Ray’s books and speaking engagements are right on in exposing the absurdities and cruelties of religion through just damn good education and compassionate acceptance of our very normal, healthy, and wonderful sexual abilities. Just one more example of: