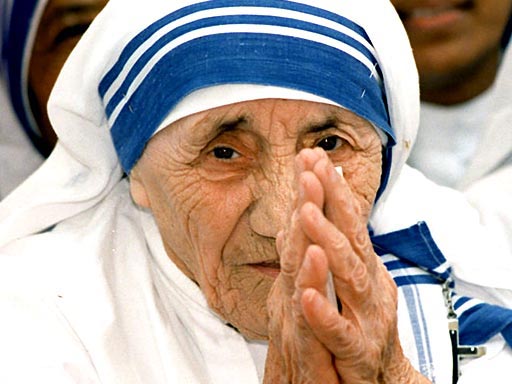 Mother Teresa.
Renowned by folks Catholic and non-Catholic alike world-wide as a wonderful religious icon, spiritual leader, caregiver to the poor, selfless model of piety and charity, who to many Catholics is a saint already (though only “beatified” thus far, the first step to sainthood): the epitome of a devout, devoted Catholic.
Undoubtedly, there are thousands more such devoted females; nuns, sisters, laypeople who dedicate their lives to the Catholic faith in as deep and committed a fashion as Anjeze Bojaxhiu, her real name.
There is one other thing all these true-blue faithful Catholic women have in common no matter how good and exemplary a Catholic they may be:
They could NEVER, EVER be Pope. Not even Mother Teresa.
Not Pope, Cardinal, Bishop, not even a Priest.
And why?
Because they have the wrong genitals between their legs.
Absurd? Cruel? Ridiculous? Commanded by scripture? Ordained By God? Outdated patriarchal interpretation? Complete Bullshit? A classic example of the Arrogance of Religious Thought?
All of the above.

Not even Mother Teresa, the quintessential Catholic of our time, whose publicity was a significant boon to the Catholic Church every bit as much as her formidable fund-raising…
can’t even be a Parish priest and deliver the sacraments.
Because she is a woman. Limited, inferior, second class.
Born with the wrong genitals.

So absurd and insane and accepted as a normal aspect of religion.
Misogyny.
I tell my daughter never to join a club she can’t become president of, never join an organization where you cannot rise to become the leader… where you are defined from the outset as a second class citizen… all because you have the wrong sexual apparatus between your legs.
End Religion Now.