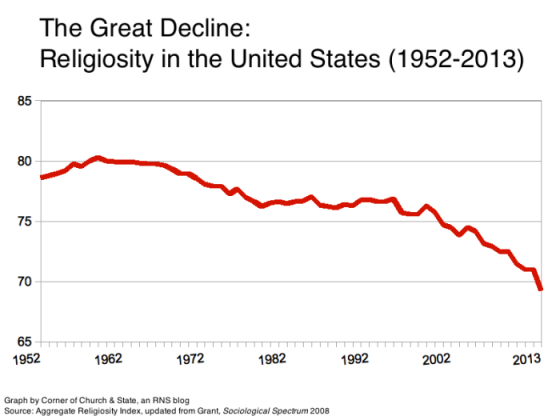 Richard Dawkins‘ website featured the work of the sociologist Tobin Grant on the decline of religiosity in the US, as depicted in the graph above and Jerry Coyne at WEIT summarized and commented on the fine points here.
I will take my own spin away from it.
Yes, compared to other industrialized countries, the US is hyper-religious, but compared to Islamic countries, we are downright enlightened and progressive here in ‘Merica. The Islamic countries are for the most part stuck in a Medieval time warp in their daily, hourly reference to religious ideas and practice and in their overall outlook on knowledge, human nature, and progress. Allah will provide.
In the 1600’s you could witness beheadings routinely for offenses against the crown or for murder and hands being chopped off for thievery and the like in most European countries and ALL the populace was certain any bad shit that went down was the direct result of sin against god.
Only in Saudi Arabia and Iran today, five centuries hence, are there regular beheadings as punishment, sometimes on public display.
Smuggling hashish can still get your head separated from your body here in the 21st century… Four Saudis Beheaded for Drug Trafficking.

Believe it or not Xian Medieval Europe was every bit, if not more, religious and barbaric as the worst of what Islam has to offer yet today. 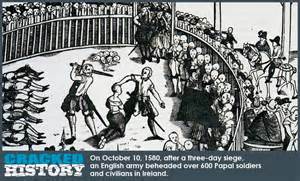 The image above depicts the Protestant English Army beheading over 600 Catholic soldiers and citizens of Ireland in 1580. Religious thought drove this sort of barbarism then and does so now. Thankfully, as part of the decline of religiosity in the West that began with the 1st Enlightenment, beheadings faded out completely in Europe by the 19th and early 20th centuries. And no-one but a few Conservative Xians think diseases and mental illness arise from transgressions against god or demons.
However, the depressing and superstitious heritage of emphasizing man’s dastardly nature is still promoted by Conservative Xiansanity™ in its perspective on the innate depravity of man: we are inveterate sinners deserving of the regular wrath of God.
They still believe that bullshit, and want the rest of us to as well, but luckily the Conservative Xiansaniacs (TM) live in a civilization evolved enough socially that their punishment options are severely limited compared to those available in some areas of the Middle East.
Baptists and Pentecostals and the like in the US at least resort mostly to social ostracization which can be still be quite powerful in its coercion. Ask any kid brought up in the South. And they rely on Xian propaganda and a sanctimonious assumption that being Bible believers and god-fearing souls they somehow have the higher moral ground.
Despite their formidable efforts, religiosity has been in decline in this country for over 50 years and according to Dr. Tobins’ research, corroborated by various polls from Pew Research and Harris for example, it has accelerated over the last decade, coinciding with the New Enlightenment.
It’s a beautiful thing.
The New Enlightenment is in full swing and we can accelerate it further.
Religiosity in Europe has already declined considerably and there is no reason we here in the US couldn’t catch up.
Despite the protests and hand-waving of the Conservatives, people are jettisoning the delusions and unfounded negative perspectives of religion. 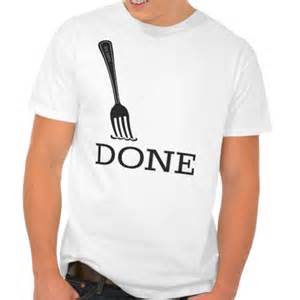