Greg Mayer who contributes to Jerry Coyne’s “Why Evolution is True” recently wrote a very succinct and heartfelt piece on why he teaches.
He nails it for me too!
A student just came to my office to enroll in my evolution class for next semester. As he was leaving, he said, “By the way, after taking your zoology class, I got Why Evolution Is True and “Your Inner Fish, and really enjoyed them.”
Sometimes, it all seems to be worthwhile. 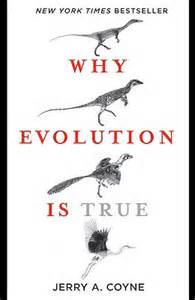 Teaching what we really know about the world we live in is where its at.
In my case since I teach mostly psychology courses I’m often talking about the real deal about human nature versus the old speculative primitive nonsense (and cruelties, and absurdities) that religions teach.
And when I’m lucky enough to teach more biological science (as when I taught Animal Behavior) and especially history of science I really get excited.
And why? Cuz its the real thing, hard won true knowledge not influenced by religious presuppositions and it aint old religious mythical claims like “homosexuality is an abomination”

“Why Evolution is True” and “Your Inner Fish” are both full of modern no-nonsense information about life, our world and our place as humans in it. There’s no myth, no ancient speculations about human nature.
What is in those books is what every human should know, what every child on earth should be taught instead of obsolete or just plain wrong Bible verses. They give you the real deal about human nature and our relation to the other animals and all life on earth. We waste our time and intellects learning the Creation story, Noah and Adam and Eve as religious truths whether literal or metaphorical when they are nothing more than old mythic primitive attempts to explain the world and its creatures.
We have to stop lying to our children that these stories are anything more than old stories from one particular period of human history, and offered by but one of perhaps thousands of cultures from which we might draw such ancient explanations.
Fortunately, thanks to authors like Jerry Coyne and Neil Shubin and so many others today, the real information about life on this earth and how it has evolved is possibly more accessible to the average citizen than at any other time in human history. It is a beautiful thing. An understanding of the fascinating and intricate biological evolution of all the myriad expressions of life as it has occurred on this planet illuminates the absolute near ridiculousness of the millenia old fanciful, childish explanations.

I’ll post more on the role of the Internet in easing the access to information, but for now this image from Yahoo Images just sez it all: 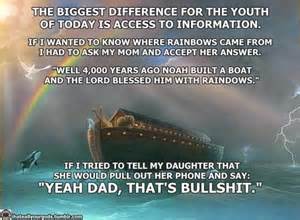