So each semester I give my Intro to Psychology students a 2 page assignment in introspection: to write down all their thoughts as they try to solve a math word problem. Among all the usual complaints about how they hate math and how can they possibly fill two pages, I received this very thoughtful piece from an unknown to me, rather religious student:

“I was trying to solve it mathematically or on a piece of scratch paper and not trying to type it out word for word but I don’t know. Who knows. I know that it is starting to frustrate me though and I think that typing two pages on this is a bit excessive but I’m required to because teach says so…”

Instead of the usual random thoughts about distractions, boyfriend or girlfriend complaints (i get a lot of that) angst over school or job, and the realization that getting two pages of thoughts from the continual stream of consciousness we all experience is a piece of cake, this student gave me some very pointed unintended feedback that reminds me why I am a dedicated secular activist, even when I’m not trying to be. They continue:

“I also kind of wonder if mr zingrone believes in god. I have noticed multiple times this semester that he refers to us as primates or apes and that we just evolved into who or what we are today. But is that just his professional opinion or is that what he truly believes. And why does it matter honestly. It shouldn’t I don’t even know what I believe in. are we monkeys? Are we created by some higher being? Is god really what people make him out to be? Some mystical magical human like entity or were we placed here by some alien race that put us here as a test? Why do we not have more answers to these questions? Why am I questioning my faith? Of course I believe in God. I believe in Jesus and I believe he died for our sins. But do I believe that because I truly believe that or do I believe that because I was raised to believe that because of our Christian nation that speaks so highly of this never before seen god. I mean the bible is a real text written millennia ago. But how accurate is it? Does it hold any truth or is it just like a big game of telephone and he said she said nonsense that started at the beginning of mankind? I wish there was an absolute and one hundred and ten percent way we could actually have the answers to these questions because I think it would promote world peace.

Hahahahaha who am I kidding there is absolutely one hundred and ten percent absolutely no way to get through to religious extremists. They will always be willing to kill hate put down and otherwise hurt people they don’t agree with in the name of their prophets or almighty god. Which is terrible. Because people are people. There is absolutely no difference between us besides our skin color or nationality or religion or culture. We are still conceived the same way. Still have all the same organs and bodily functions. Still need to eat to live and drink water to live and still feel love hate happiness sadness depression anxiety all of that. None of that changes based on the color of our skin and you would think that in 2000 years people could figure that out but its absolutely astonishing that people still hate each other strictly because they are a different color or faith or nationality then they are. Its disturbing and sickening. But I guess teach was right two pages does fly by for this.”

They nail the “Religion as a function of geography, accident of birth location” problem that no religion has an answer to. Then they go on to question the veracity of their “scripture,” another key criticism religions have no answer for as well. And last the student hits the nail on the head for the third time, in calling out the wholly arbitrary and very damaging divisiveness that all religions create. That despite us all being the same, we find ways to hate each other with faith being one of the main reasons.
Ya gotta love it. I purposely don’t say a word about my lack of belief in any course I teach, don’t tell my students about my blog or book or my secular activism. I am there to teach the science of psychology, that’s my job. I’m not paid to use the classroom as my personal soapbox, and I don’t want any religious student to feel uncomfortable or challenged in a class that they’re paying my salary to instruct them in a subject that is orthogonal to their religious beliefs. I might be merciless against their beliefs (not them) in another context, but not in the classroom where the subject is not religious criticism.

I just bury ’em with the science. I suspect they get a lot more genetics, neuroscience and yes, evolutionary perspective than from most of their psychology instructors and it inevitably clashes with any religious ideas they may have been taught about human nature from their religion: sexual orientation, gender, prenatal development and spontaneous abortion, human evolution, brain = mind materialism, empathy, conformity, agency, obedience to authority, etc.
Psychology gives you the real deal on human behavior as best we know it today and that information tends to refute much of our cultural assumptions which are all too often derived from old religious thought.

And for this student, all that mere exposure got ’em really thinking. Fuck,yeah!

“I think it is absolutely crazy that I started with a math problem and ended up talking about religion and faith and racism. I think that I did do a fairly good job of capturing all my thoughts abstract as they may have been. I realize now that I was pretty focused this whole time. Not necessarily on the math problem but once I got going it was hard for me to stop with the religion and racism and all that. I think that introspection is a good way to see how people think and the way that they think whether it be critically or abstractly or about real issues or kind of all over the place. I mean the issue of these faiths destroying humanity and the idea of racism actually does really bother me.”

Information kills religion. And the information is everywhere. And it’s working. Yes even with Islam where the situation seems impossibly hopeless at times. Mere exposure to modern knowledge creates the cognitive dissonance you see this student express. And their thoughts are by no means unique.
We secularists often get discouraged that you can’t change the religious mind, especially the hardcore ones, as even this students laments.
But it is not in the least bit hopeless. The vast majority of the rapidly growing secular population worldwide were all once religious, some as hardcore as any you may confront or see wailing on in the media. We are winning.
Just keep chipping away. Keep talking, keep challenging religious claims and thought.
Keep repeating the real deal, keep spreading the information, keep laying out the honest, hard-won modern knowledge we all share as a species.
You never know when you may be getting through.
Made my fucking day! 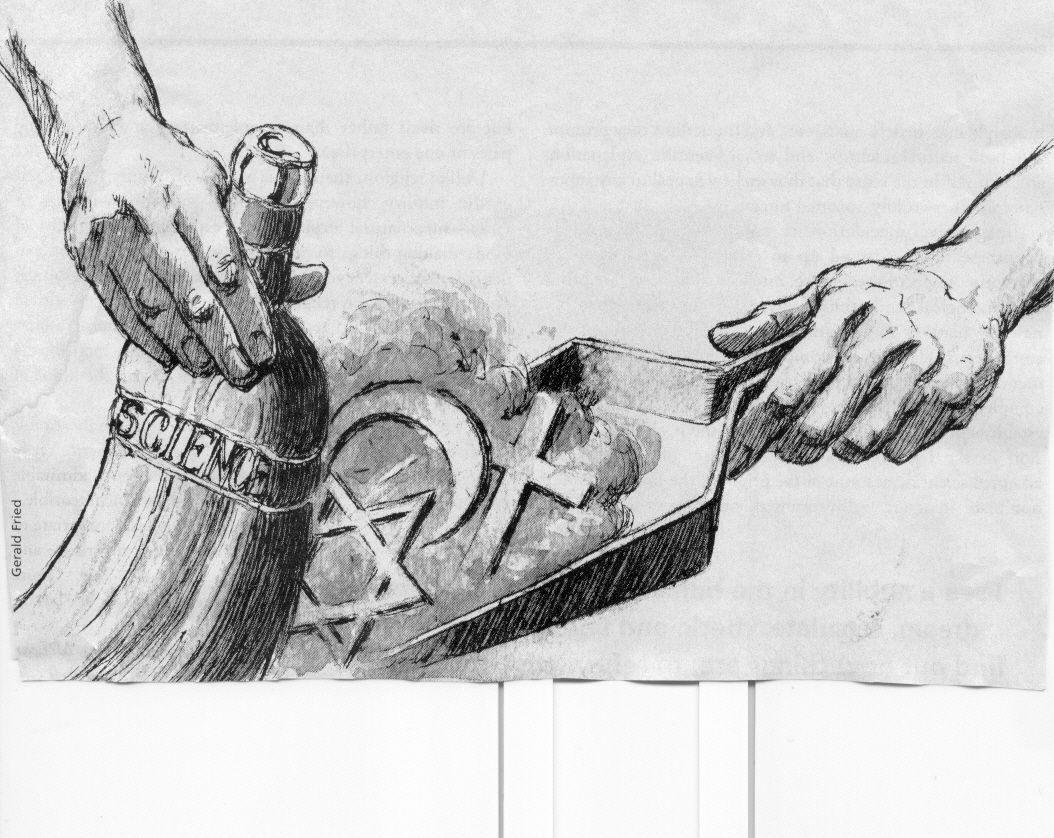