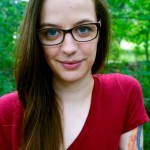 Elizabeth King, a budding young Chicago writer, has an interesting plaint in the Washington Post describing how tough it can be to shake off the indoctrination of religion in I’m an Atheist so why can’t I shake God.
She begins her piece with this open and honest paragraph that provides real insight into why she may be still struggling with the ominous worries leftover from a rather smothering religious upbringing even now as a rational, young adult atheist:

“I spoke in tongues when I was a kid. I went to church twice a week with my mom, stepdad and my five siblings. I prayed before every meal, every night before bed and various times throughout the day. I believed in the Bible and I feared hell. Until my mid-teens, I was a “born again” Christian who loved God with all her heart.”

Although she began to question and jettison her faith by mid-adolescence and describes herself as an atheist for 10 years now, it is easy to see that she had previously experienced a full decade or more of immersion in hard-core Xiansanity (“speaking in tongues,” etc., kinda gives that away) as an impressionable, cognitively immature, and emotionally vulnerable child. For many, that level of indoctrination is not easy to walk away from psychologically. It can take a decade or two, or longer. For some it is impossible to reconcile and discard.
Dan Barker, the noted secular speaker and author describes his own slow ascent from Evangelical preacher, with all the false certainty and rebuttal skills of an educated Xian apologist to full-blown atheist in his marvelous book Godless, finally arriving there in his 30’s. And it wasn’t easy.
It is no wonder Ms. King and so many others who now know better, don’t always feel better.

Although also having been raised Xian, (Catholic) I consider myself damn lucky that I didn’t experience any of the typical Evangelical brainwashing Ms. King and too many others describe. In our house, we went to church most Sundays, never prayed at home, said grace at Thanksgiving and Xmas meals (but only at Grandma’s) and didn’t read the Bible. We had a big, fancy red one at home nobody ever opened. We weren’t taught to fear hell (only really, really bad people got sent there), and we sure as hell didn’t speak in tongues.

I never underwent anything approaching her level of indoctrination which is perfectly “normal” in many Conservative Xian sects (and unfortunately, much if not most of Islamic communities) and when I questioned what was taught to me as so many of us do as young adolescents, I just dropped it and never looked back. I know too many good friends and acquaintances who went through what Dan Barker and Elizabeth King and dozens of others describe in their de-conversion writings.

“Maybe I’m still subconsciously afraid of hell and want to go to heaven when I die. It’s confusing and frustrating to feel the presence of something you don’t believe in. This is compounded by the fact that the God character most often shows up when I’m already frustrated.”

Yup, when you are emotionally vulnerable and doubting yourself, the old nagging thought of “What if some of what I was taught is true?” comes creeping into your mind with a vengeance. Cultural Inertia takes over and that which surrounds you in the realm of accepted, repeated ideas asserts itself, even when you know its bullshit.

King then refers to the work of Pascal Boyer from his brief article in Nature which describes a few of the neuro-psychological processes that mediate religious thought. His book length analysis of the psychological underpinnings of religious belief Religion Explained is a must read.

We humans appear to be wired to detect agency and cause, even when none is there but we may not be specifically wired to believe in gods, spirits and the claims of organized religion. Religions supply that specific content. Left on their own children don’t create gods out to punish them. Ms. King’s subtitle to her article expresses the standard view most believers and many non-believers accept without question:

I suggest that’s not quite true.

We do look for agents; person-like causes of natural occurrences, beginning in childhood, but without indoctrination into a religion we grow out of it, with no nagging residual ideas of gods, devils or eternal punishment. It takes religious brainwashing as a child to keep our agency detectors turned on at naive childhood levels and maintain the paranoia of looking over one’s shoulder for a vengeful god lurking beyond us with eternal punishment already prepared and waiting for us should we stray from the righteous path. That takes religion: stifling, repressive, wholly imaginary and obnoxious, threatening religion to effect that.

Without religion, and for many even with it, most humans can think clearly as adults and accept the knowledge we have gained of naturally occurring phenomena without supernatural cause and that gods are purely fictitious entities carried over from our childhood and the childhood of our species, as both Bertrand Russel and Christopher Hitchens noted so well. Religious claims and practices can easily be, and are readily ignored. People do not need them, nor gravitate to them without specific religious instruction as a child. Billions have jettisoned religion altogether and have moved well beyond any psychological yearning or anxiety for same.

Religion, as we have inherited it today is not natural. Our agency detection, pattern recognition, and causal analysis predispositions may be, but the brainwashing necessary as a child to inculcate phony claims about gods and the afterlife belie their irrelevant, unnatural status. To the un-initiated, religion in any form can be readily seen as the primitive and absurd set of repressive ideas that it is. And many who were indoctrinated can still dump it forever and live free of nagging worries or guilt inculcated by religion. It just ain’t easy and it often takes time.
My fav anonymous quote expresses it best:

Ain’t it the truth. We could drop the damaging absurdity of religious thought, the result of historical accident that modern day religions promulgate, like the bad habit that it is. So many have. A rapidly growing number of modern non-believers are not repeating the mistake of forcing religious training on the current generation of children, which their parents blindly impressed upon them as an unquestioned cultural given. Those kids will grow up free of the psychological baggage only religious immersion creates.

I fully understand Ms. King’s despair:
“Having been conditioned to believe in God for so many years, and having a brain hardwired for belief, I may be stuck with the shadow of him forever.”

Maybe not. For so many, detailed in their published de-conversion books: Mike Aus, Seth Andrews, John Loftus, Dan Barker, Jerry Dewitt to name but a few, and the thousands who have given their testimonials to leaving faith far behind forever on Richard Dawkins Convert’s Corner, and in countless unpublished emails to secular authors like Dawkins, Sam Harris, Lawrence Krauss, or the late Chirstopher Hitchens, it was just a matter of time. Quick for some, others took just a bit longer to be completely free.
Continued exposure to the reality that religion is nothing but destructive nonsense can eventually reverse the effects of early childhood conditioning. Ms. King may not be stuck with the shadow of any god too much longer.
Do give Elizabeth King’s thoughtful article a read. It is well worth it.