The “Defenders of the New Enlightenment” (D.O.N.E.) YouTube channel of science and secular podcasts hosted by yours truly, Dr.Z, the Unbelieving Scum, is FINALLY in the works. I’m about a year late from the original startup date and the last post announcing my plans for the podcast-video channel to augment the writing on this blog. 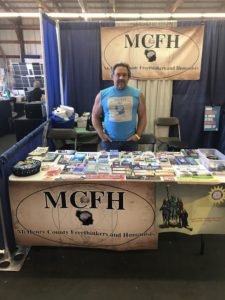 Two teaching jobs, home repairs, secular activism (my McHenry County Freethinkers booth pictured above), voting registration, and lack of funds got in the way. But not no more. Two jobs AND Social Security income allowed for purchasing a nice little camcorder and mike, and the remodeling of my library-studio last winter that will be the backdrop for the YT lectures: 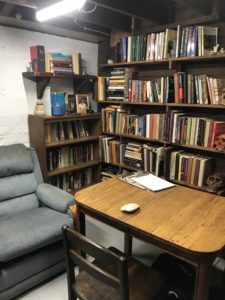 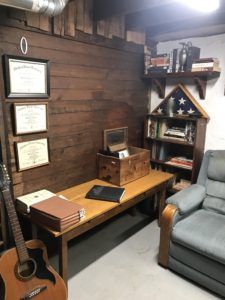 VERY pleased with finally having a place for all my books on science and secularism. The library is filled with such, and except for one section on the Civil War (mainly Gettysburg – 2 dozen books or so) all the books relate to Human Evolution, Neuroscience, Cognition, History of Science, and of course, secular writings. It is a very compact but comfortable setting in one corner of the basement now, that turned out well for just over a $100 budget considering what it looked like before I started: 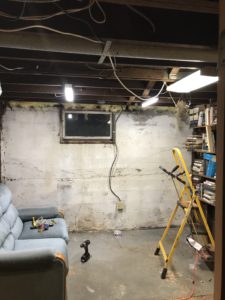 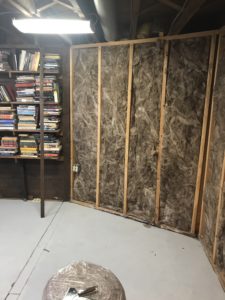 (All labor supplied by Unbelieving Scum El Cheepo Construction Company – me)
Took a bit of work: added proper lighting (last year’s model LED fixtures on sale at Menard’s), insulation, bookshelves, and bookcases, paneling, etc. Picked up the oak tables for a song at antique stores and the little couch was a freebie-giveaway from a colleague. Gotta love it. Had the bookcases for years and built the bookshelves my own self, and the whiteboard was a freebie as well. Allgood.
The plan is to produce 10-15 minute lectures for the YT channel, standing in front of the books and/or whiteboard, adding notes on the whiteboard to augment my lecture as I do all day long in my college Psychology teaching job…but without the grandkids scribbling and impromptu artwork all over it, of course. 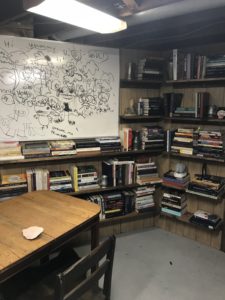 I’m pretty proud of it, actually. The books below the whiteboard and to the right are almost all the secular authors: Dawkins, Hitchens, Harris, Dennett, Shermer, Pinker, Barker, Carrier, Stenger, etc., and Neuroscience and general science. Makes for a pretty good backdrop for a Science and Secular podcast, dontcha think? I like it! They go hand in hand, I think, secularism and science that is. They are inseparable, when you think about it, and like this 6 1/2 year-old blog now, the YT channel content will be dedicated to a celebration of all things scientific and secular, with a healthy dose of religion-bashing thrown in for good measure. It is hard to believe that over 450 posts later this blog began way back in October of 2013, when I was still teaching in Kentucky. Like wow. A lot of research and writing, rewriting, editing, image search, and deliberation went down to get here. I sure learned a lot in the process. Researching and referencing sources to learn about a topic well enough to write or lecture about it takes some real time and effort. I like it all, especially the public speaking on science, so its all good. This blog will remain as a companion site to the YT channel which will be an adventure in itself. Research for the new YT lectures will wind up in written form, right here. 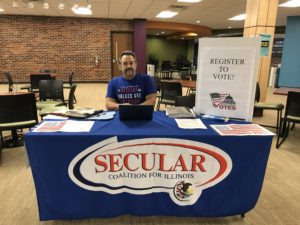 I had to give up my spot as Treasurer of my local adjunct college instructors union after a 4 year stint at that, AND I relinquished being Chair of the SCA-Illinois (Secular Coalition for America), despite loving it…but something had to give in my schedule for the YT channel to become reality. I really enjoyed the SCA work, a great and greatly needed organization, but I found I could be 10x more efficient at registering voters by soliciting the unregistered among my 18-24 year old students, rather than manning a table somewhere hoping someone will walk by and have the interest, time, and ID on them to register. More on that later, but I do miss the SCA involvement.

I’ve spent the last 2-3 weeks of Xmas break, learning the cam and mike setup, recording some sample content and watching a dozen or two videos on how to set up and market your own YT channel. There is a lot to learn and its is exciting: video editing, camera angles, sound and graphics, content, tags, banners, thumbnails, advertising and patreon to set-up, you name it. Ive really studied my fav science Youtubers: Physics Girl, Answers with Joe, Origins, Science Salon and some of the most successful science channels like VSauce and Crash Course, as well as a bunch of YT instructional videos for how to do it right. There IS a lot to it, fersure. SO glad to be finally into it, other home projects done or scheduled for Summer, so the priority the next few weeks is getting this YT channel setup and 5-10 videos in the can so there is enough content there already when I go public with the channel. (One of many good tips I learned, don’t start with just 1 or 2 videos, if someone finds your new site and there ain’t much to choose from…may not subscribe or come back for more). 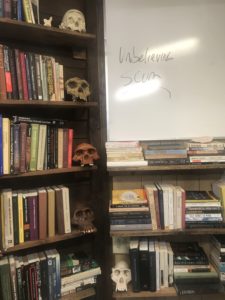 I really like having all the Human Evolution and Paleolithic Archaeology books aligned top to bottom along the whiteboard, with the hominin skulls in ascending order and a chimp skull off to the lower right, for a backdrop to lectures on Human, especially Cognitive Evolution. It is yet my passion and the subject of the book I’m working on now and will be for the next year with the working title of: Tools, Concepts, and Consciousness. I’ll be referencing many of those books and talking about those critters and their tools in the future to be sure.
So, ciao-ciao for now (homage to the late flamboyant food critic and afficianado-James Ward) and I plan to be announcing the public launch of the New Enlightenment-Science and Secular podcast YT channel soon!