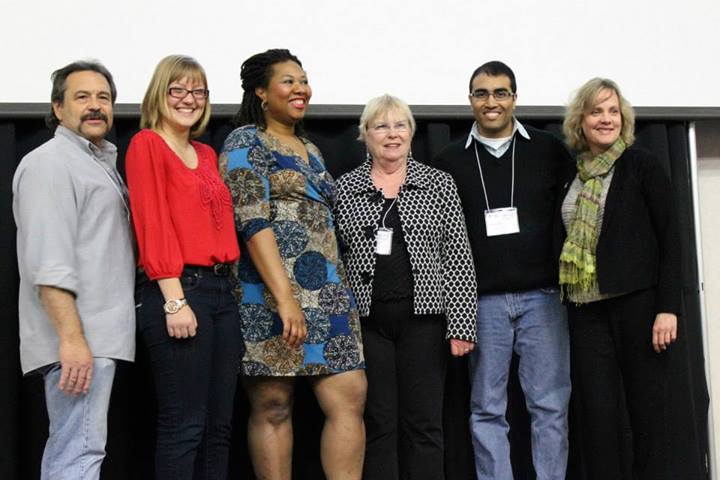 Just got back late last nite from speaking at the 2nd annual Kentucky Freethought Convention along with well-know secular speakers: Hemant Mehta the Friendly Atheist, Annie Laurie Gaylor from the Freedom from Religion Foundation and the journalist Jamila Bey. I was proud to be included on such a platform. A long excellent full day, well organized and great speakers all, including Sarah Henry a high school secular organizer who spoke of her issues in getting a secular student organization going in a high school. The fact that there are 52 high school groups affiliated to date with the SSA (Secular Student Alliance) and that courageous and persistent young folks like Sarah have the 24 karat chutzpah to attempt to put together such a group right along the edge of the Bible Belt in the good ole US of A speaks volumes as to where this New Enlightenment movement is headed. One wonders why there should be any opposition at all from those who ascribe to the “religion of love”? A mother and daughter approached me after my talk to tell me of their experiences just being non-believers in rural KY around Louisville where her two children have experienced verbal taunting, threat of physical violence and actual physical attack. They resorted to home schooling as a result. Isn’t that just special? Once again, “Jesus loves you, but I wont if you don’t love Jesus!” The arrogance of religious thought knows no bounds.

Well, that was not only the thrust of my talk “The Arrogance of Religious Thought” but each speaker indirectly presaged my theme (the last talk of the day) and my second point “Information Kills Religion.” All the speakers spoke of the Internet and the smart phone as the key parts of the information-education revolution that is dispelling religious claims literally at the speed of light. It is getting increasingly hard to bullshit people when they can check on it for themselves in a heartbeat. We all commented on how the younger generation 13-18 for the most part are so un-religious and utterly unconcerned with race, creed, ethnicity, sexual orientation…all the things that old folks and religions dwell on to divide us. They don’t care. And we all agreed the Internet revolution has a lot to do with it, they are connected to the entire world and it is full of different people and they don’t buy into the old dividing lines of race and religion.

The thrust of my talk was to not let up on the gas pedal with this rapidly expanding secular Enlightenment movement, and to go on the offensive and be strident about the unquestioned religious arrogance that gets a free pass in our culture. Part of my tiny effort in the movement beyond this blog (thus far) is to write weekly columns and educate people on the absurdities of religious thought in this country in particular that we should be outraged over. I wrote on the absurdity of the utterly fantastical Creationist claim that dinosaurs and humans ever walked the earth together last Spring and it started a shitstorm of letters to the editor about the clash of worldviews and how the poor Creationist were being dissed, blah,blah,blah. I even got featured on Ken Ham’s website as the “Psychologist who lost it” or some such shit. I haven’t read it to this day. So this past Friday the MSU NEWS here at Murray state published my column on the absurd and obnoxious YEC (Young Earth Creationist) claim held by Ham and Ray Comfort and others that the earth could only be 6,000 to 10,000 years old. Here it is:
Creationist Delusion 1: A Young Earth.
Throw your geology textbook away, biology ones too, your organic chemistry textbook, your smoke alarms, don’t bother to get a PET scan or thyroid scan if you have cancer, unplug your electronic devices from the wall if your electrical power is generated by a nuclear plant. None of the textbooks are right and all those devices can’t possibly work because Ken Ham and Ray Comfort and other knowledge deniers claim the earth is only 6-10,000 years old. According to them, Carbon 14 dating doesn’t work, nor do any of the other dozens of methods we have for dating the earth. Yet, somehow devices like smoke detectors, nuclear reactors and nuclear imaging machines that depend on the very same incredible technology of radioactive chemistry and physics work just fine. All the science we use daily all over the globe must be hopelessly flawed because Ham and the PhD gofers on his staff know better than all the thousands of scientists who can somehow run hundreds of thousands of nuclear devices correctly all over the world but just can’t get the dating part right. The very idea is so preposterous and pretentious that it deserves all the ridicule we can heap upon it.
Over 130 labs worldwide produce C14 dates daily for archaeologists, geologists, classics scholars, biblical scholars, paleontologists, etc. C14 works excellently for dating artifacts back to 50-60,000 years old every day of the week. Ham’s Answers in Genesis website does a decent job relating the science behind C14, but then conveniently leaves out it gives dates beyond the few thousand years allowed in their absurd Young Earth Creationist scheme. Ham’s resident PhD knows better than all the thousands of scientists all over the world who operate all these dating methods? Hiding information to make your crap theory seem plausible: isn’t that dishonest? Doesn’t that go against one of those Commandments we hear about all the time? Is that why so many educated Christians, even Evangelical ones like Rachel Held Evans whose blog I spoke of in a previous editorial have given up denying the young age of the earth because the evidence is just too overwhelming and the claim of a young earth is a bold faced lie? We should be outraged at this insane denial of reality, this infantile rejection of science, this dishonest attempt to make an extreme, ridiculous and idiosyncratic interpretation of the Bible look plausible by denying or deliberately hiding information as if it didn’t exist. We should be outraged.
Furthermore, we have over 40 other dating techniques that use radioactivity like Carbon14 that date the age of rocks, fossils, etc. beyond the range of C14, also in use daily all over the world. The same radioisotope chemistry that tells us how to build the smoke detectors in your house, that runs the hundreds of nuclear powered subs and ships steaming all around and under the oceans, or generates electricity in dozens of nations is the same science that tells us the earth is billions of years old. The international community of scientists know the theory of how these things work, they know the intricacies of the isotope chemistry and physics in your textbooks and can build and operate these incredibly complex and elegant technologies, yet somehow Ken Ham and his resident PhD’s can overturn the consensus of an entire scientific domain by proclamation alone. The ludicrousness of their claim is exceeded only by the sheer bombasity of it.
This is not a clash of world views; this is reality versus absurd delusional claims based on a perverted interpretation of Biblical scripture. It is knowledge versus complete bullshit. Creationism is utter pseudoscience and the State of Kentucky shouldn’t be funding a dime of it. All because Ham and Comfort and others demand you do Christianity their way or you are not a real Christian. Twelve trips to the moon, about 800 lbs. of moon rocks dated in dozens of samples at different labs by radiometric dating, and hundreds of meteorites too, collected for decades from all over the world all yield the same dates in the neighborhood of 4.5 billion years old for the age of the earth and our solar system. But Ham and Comfort and company don’t want you to know about that either, they pretend it doesn’t exist. All the science must be wrong because they demand their absurd fantasies have to be right. This is a prime example of the arrogance of religious thought. Evidence is demanded in every other human endeavor, but you can make up whatever you want in religion and hide behind the banner of faith to promote your preposterous ideas. We need to be strident: vociferous and loud and constant in ridicule and refutation of such Creationist drivel. We should be outraged.

So I find out late Saturday afternoon that Ken Ham is evidently quite upset once again. I wont dignify whatever drivel he wrote by reading it this time either. I am sure I will hear about it soon enough. Good. Let him get torqued. Let’s challenge this nonsense hiding behind the wall of faith and that nasty little book “the Bible.” Let them be on the defensive for their absurd claims from now on. I plan to write a series of columns that take on Creationist claims one by one. All the info is out there and whatever I refer to in my columns, on my blog, anyone can go look for themselves. And when they do modern knowledge tends to trump ridiculous and divisive religious claims every time. “Information Kills Religion.”

Below are my PowerPoint slides from my lecture at the Kentucky Freethought Convention, check it out for yourself: Click here for “The Arrogance of Religious Thought.”